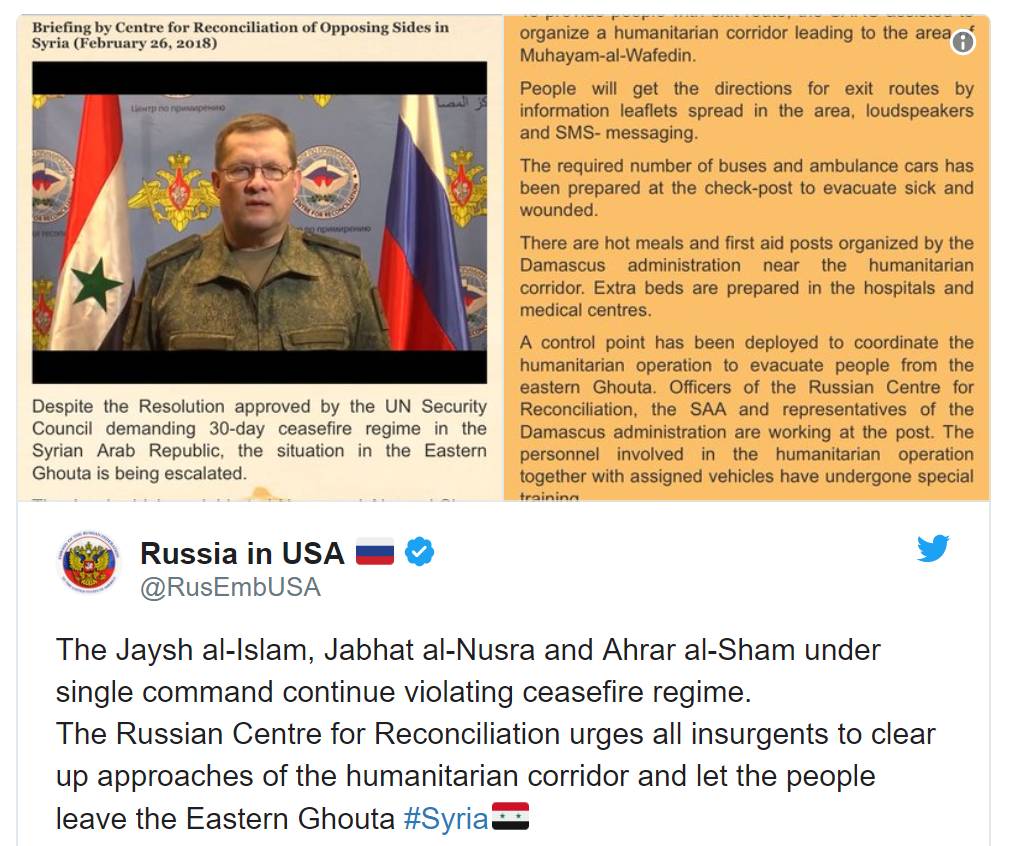 Russian Foreign Minister Sergei Lavrov stated on Tuesday that a humanitarian pause in Eastern Ghouta would show whether a desire for a ceasefire among militants, distancing themselves from the Jabhat al-Nusra terrorist group, was sincere.

Speaking about the accusations against Damascus, the Russian foreign minister expressed the hope that those who have some influence on the opposition in Syria will prompt it to implement the resolution on the truce.

“I would advise our French friends, like everyone else, to check the facts as thoroughly as possible,” he said at a press conference with his French counterpart in Moscow on Tuesday.

French Foreign Minister Jean-Yves Le Drian said Tuesday that he had discussed with Russian Foreign Minister Sergei Lavrov the steps that should be taken for the implementation of the UN Security Council resolution on the truce in Syria.

The talks took place after Saturday, the UN Security Council unanimously adopted resolution 2401 urging all parties to the conflict to immediately stop all clashes and adhere to a long-term humanitarian pause across the entire territory of Syria in order to ensure the safe and unhindered supply of humanitarian aid as well as the medical evacuation of those injured.

The Russian minister also commented on the current complicated situation in Syria, saying that it was far from achieving the all-encompassing ceasefire.

“I would also like to express the hope that those in the opposition, who according to the UN testimony continue the bombardment of Damascus, will assume responsibility, will accept the need to comply with the demands of the UN Security Council,” he said.

As the Russian top diplomat explained, the humanitarian pause in Eastern Ghouta would show the real motives of militants, distancing themselves from the Jabhat al-Nusra terrorist group.

“The resolution must still be implemented through the achievement of agreements on the ground … And we will check in practice how much the assurances of the three illegal armed formations which have allegedly distanced themselves from Jabhat-an-Nusra in East Ghouta, how their assurances of readiness to comply with resolution 2401 correspond to their true intentions,” Lavrov said.

The humanitarian pause in Eastern Ghouta, which lasts today from 09:00 a.m. [07:00 GMT] until 2:00 p.m., was announced by Russian Defense Minister Sergei Shoigu on Monday.

The pause followed the relevant order of Russian President Vladimir Putin, with the security at the exit from the humanitarian corridor is set to be provided by the Russian military police and the Syrian army.

Meanwhile, as the Russian Defense Ministry recently reported, the civilians in the areaare not able to leave due to the shelling of humanitarian corridors by militants.

Russian Foreign Minister Sergei Lavrov continued by speaking about the humanitarian access to the city of Raqqa and the Rukban refugee camp in Syria.

“In the same regard, it is important to understand what is happening in the Rukban refugee camp, which the United States is guarding, without letting anyone out of this camp. It is estimated that there are about 60,000 refugees there. But this is preliminary information. So we would like to have humanitarian access to this area of the Syrian Arab Republic, or at least a mission that would allow us to understand what is really happening there,” Lavrov stated.

The minister noted that sending a mission of United Nations or the International Committee of the Red Cross to Raqqa, as proposed by Russia, would clarify the humanitarian situation in the city. According to Lavrov, this “will fully comply with resolution 2401”, which calls for addressing humanitarian issues in Syria.

His statement comes in wake of Russia’s Monday’s proposal to set up a UN-led international humanitarian commission to assess the situation in Raqqa.

The capital of the Daesh self-proclaimed caliphate, Raqqa has been under the terrorists’ control since 2013. In late 2016, the US-backed Syrian Democratic Forces (SDF), started an operation to free the city from the terror group. In October 2017, the SDF announced Raqqa to be fully liberated.