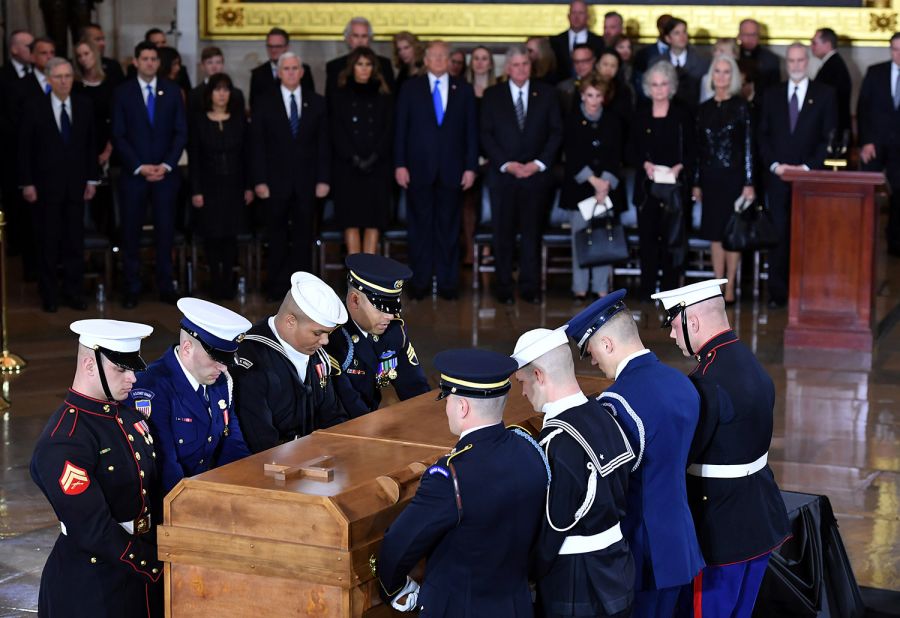 Today the body of Christian evangelist Billy Graham was marched into the US Capitol  Rotunda by members of the US armed forces (Graham was never in the military) to lie in honor.

Graham is the first member of the clergy to be given this honor. This is a victory for the Bible promoting theocrats who work tirelessly to smash the Jeffersonian wall of separation of church and state in order to turn the US into a Bible-based theocracy.

For people who want to live in a secular nation free of religious intrusions into their lives and free of the religious violence produced by mixing religion and government, Billy Graham was a real threat and worked to destroy the principle found in the US Constitution separating religion from government. As this article points out, Graham laid the groundwork for the religious right.

The religious right that is today elevating themselves above the law through “religious liberty” laws and government policies that cause religious beliefs/superstitions to take precedence over the law of the land. Graham paved the way for Christian theocrats like Pat Robertson, Jerry Falwell and others.

Christian Zionists share Billy Graham’s superstition based belief that the Jews are God’s chosen people “above all people that are upon the face of the earth” (Deuteronomy 7:6 which was written by the ancient Jews), and that Israel produced Jesus so Christians owe Israel for their savior. Graham said, “The Jews are God’s chosen people. We cannot place ourselves in opposition without detriment to ourselves.” (In his “God letter” Albert Einstein wrote that there is nothing “chosen” about the Jews.)

If we want to counter, and eventually end, this religious threat to the separation of church and state and all the harm it brings, we need to promote the antidote – Deism. It was Deistic ideals and beliefs that inspired many of America’s key founders to separate religion from government at the birth of the American Republic. Professor Joseph Campbell made this clear when he wrote:

The United States of America is the first nation in the world that was ever established on the basis of reason instead of simply warfare. There were eighteenth-century deists, these gentlemen [who founded the United States]. Over here [on the one dollar bill] we read, ‘In God We Trust.’ But that is not the god of the Bible. These men did not believe in a Fall. They did not think the mind of man was cut off from God.

The mind of man, cleansed of secondary and merely temporal concerns, beholds with the radiance of a cleansed mirror a reflection of the rational mind of God. Reason puts you in touch with God. Consequently, for these men, there is no special revelation anywhere, and none is needed, because the mind of man cleared of its fallibilities is sufficiently capable of the knowledge of God.

Joseph Campbell had a profound understanding of Deism. It is evident by what he wrote, why the clergy hate Deism and our innate God-given reason. They hate them because Deism and reason show everyone that there is no “special revelation” that we need the clergy to explain to us.

Deism empowers people with this realization that our reason puts us in touch with The Supreme Intelligence/God, not religion. Billy Graham must have been aware of this since he openly admitted there is no reason that aligns with our innate God-given reason to believe the Bible is the Word of God.