Health Editor’s Note: According to the CDC drug overdose including those caused by opioids are on the increase in the U.S.  Sixty-six percent of drug overdoses involve opioids.  The rate of these deaths are five times higher than 1999.  An average of 115 Americans die every day from opioid overdoses.

Yesterday, the Senate Health, Education, Labor, and Pensions Committee conducted a hearing to ask experts in technology and data if they can contribute to program identifying and halting the over-prescribing of opioids.  Will this program be able to address issues such as a patient receiving opioid prescriptions from doctors in more than one state? This procedure will have requirements such as what data is recorded, who can access it, and for what purpose. This tracking program would require that all states should integrate Prescription Drug Monitoring Programs (PDMP) into electronic health record (EHR) systems.

Some legislators see the responsibility for record keeping as falling  under Federal purview while others see it as a state issue. Could the data mined be used for nefarious purposes? Would there be room for commercial enterprise in this system?  E-prescribing is being used as we write this, deaths due to opioid overdosing is over a hundred per day, and speed is needed for a working process. The Department of Health and Human Services (authorized but not yet funded) whose Secretary, Alex Azar, former Big Pharma CEO, will have a hand in running this since the National All Schedules Prescription Electronic Reporting Program is housed within HHS…..Carol

WASHINGTON — Interoperability, predictive analytics, e-prescribing: these were some of the terms buzzing around the dais at a hearing of the Senate Health, Education, Labor and Pensions Committee on Tuesday.

The focus of the hearing was to solicit expert input on the role of technology and data in addressing the opioid crisis. The committee is currently drafting legislation related to the epidemic, which it plans to mark-up as soon as late March.

Specifically, Chairman Lamar Alexander (R-Tenn.) asked the experts how the federal government can use the data it collects to identify and stop the overprescribing of opioids.

Sen. Patty Murray (D-Wash.), the committee’s top Democrat, also spoke of the challenge of interoperability with prescription drug monitoring programs, noting that “the prescription a patient receives in one state may not show up in the system of another state. Two doctors in different states may not see they are writing prescriptions for the same patient.”

The concern is that providers may miss meaningful data that could alert providers to signs of a substance use disorder, she added.

First, pass the “Every Prescription Conveyed Securely Act,” which would mandate e-prescribing for opioids for all Medicare enrollees, she said.

Second, limit prescription for a first-time opioid user to 7 days (with exceptions for cancer, hospice, and palliative care) in keeping with the “Opioid Addiction Prevention Act,” she said.

Mahon also urged Congress not to mandate coverage for abuse-deterrent opioids saying that it was a “flawed approach” because some providers and patients mistakenly believe such products are less addictive.

Sherry Green, CEO of Sherry L. Green & Associates and co-founder of the National Alliance for Model State Drug Laws in Santa Fe, New Mexico, urged the committee to establish a federally funded hub that would break down the data silos and have consistent standards.

Green told MedPage Today after the hearing that there needs to be standards in each state for three key elements: what data is recorded, who can access it, and for what purpose.

In addition, she recommended that all states should integrate Prescription Drug Monitoring Programs (PDMP) into electronic health record (EHR) systems.

In his testimony, Sanket Shah, a clinical assistant professor of health informatics at the University of Illinois at Chicago, focused on the impact of predictive analytics to leverage data, and identify warning signs of potential opioid dependency.

He cited a recent study that found “each refill and week of opioid prescription is associated with a large increase in opioid misuse among opioid naive patients. The data from this study suggest that duration of the prescription rather than dosage is more strongly associated with ultimate misuse in the early postsurgical period.”

He explained in a follow-up email to MedPage Today that self-reported data from people on opioids, after they’re discharged, such as the Current Opioid Misuse Measure, is one type of data that he’d like to see leveraged as it might be more accurate than information patients share in a doctor’s presence. Such data could be used to improve risk assessment tools, and better predict factors leading to relapse for those in recovery, he said.

Shah specifically recommended passage of the Prescription Drug Monitoring Act of 2017, which mandates that any state that receives funding from the federal government for a PDMP must share their data with other states. The bill also includes language around helping fund a data-sharing hub.

He noted in his testimony that the federal government has both “the means and the infrastructure” to develop an “integrated data environment” that could use factors such as social determinants of health, family and medical history and access to complete episodes of care to help health informaticists improve their predictive capabilities.

Alexander balked at the idea of the federal government overseeing a federal hub, and being responsible for data-sharing on a large scale. He pointed to Healthcare.gov and Meaningful Use as examples of government-failed experiments in this same realm.

“Why not instead establish the standards that states can use and why not leave room for Amazon, Google, Delta … Why not let the private sectors come in and offer a way to fill in whatever gap remains after we gradually improve the state PDMP?”

Alexander also asked whether e-prescribing should be tested more gradually, rather than mandated because “the technology is still evolving.”

“Because we have an epidemic, I don’t think we have time to wait. What we can do is carefully figure out what are some of those areas that we could leave some exceptions and give them extended dates of when they should be ready” for e-prescribing, “but certainly the rest of the physician practices that do have the ability to do e-prescribing. We should move on them now,” Mahon said.

As for the idea of a federal hub, Green stressed that the federal government would not need to run the hub.

After the hearing, she suggested to MedPage Today that one program in particular, the National All Schedules Prescription Electronic Reporting program within the Department of Health and Human Services (which has been authorized but not funded), could potentially put out a grant for running such a hub.

Maintaining the right standards would be critical as the data is valuable itself and could become a commercial commodity, if the government isn’t careful.

But “this an area where there truly needs to be a public-private partnership,” she said. 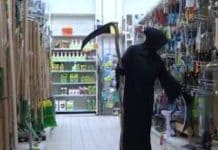 Death at the Grocery Store (updating)