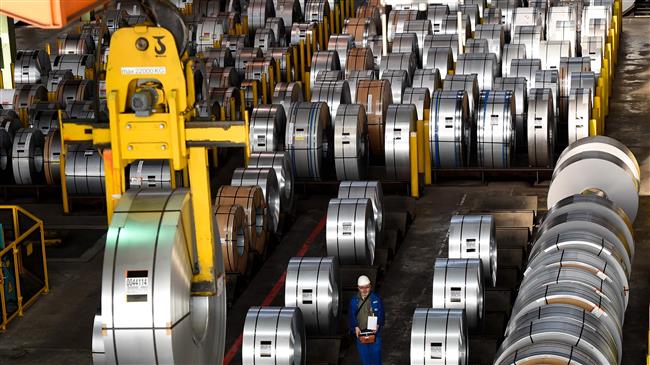 [ Editor’s Note: Well the doo doo has hit the fan. Yesterday’s news had reports of Congressional Republicans in an uproar over higher steel and aluminum prices working their way through into higher product prices for consumers that negates some of the benefits of the tax cuts they worked so hard for.

The White House staff as said to have been working to delay Trump’s announcement, knowing that it could unite Repubs and Dems against it and be a troublesome mid term elections political issue. But Trump pre-empted the staff by making an impromptu press announcement.

He was flippant about trade war concerns also, with his comment that “they are good, and easy to win” which ponders the question of how could he possibly know with his limited education, where he has a lifetime of faking it as a cover.

Not surprisingly the Europeans tried to throw China under the bus, that they are dumping steel so tariffs are fair for them, but not for the EU. We will now get to see if the World Trade Organization works, or is just another empty shell organization like the UN has become.

This will benefit Iran as the EU will not want to lose its pending deals there due to the banking sanctions threats. They may tie their response to both… Jim W. Dean ]

Germany has called for “determined” action to counter a proposal by US President Donald Trump to impose sharp tariffs on steel and aluminum imports.

Trump proposed new tariffs on imported steel and aluminum as part of his protectionist policies in line with his slogan, “Make America Great Again.”

This is Trump’s first major step in fulfilling his promise during the 2016 presidential election campaign to protect the US steel industry. The European Union (EU) member states are concerned about the impact of the new tariffs on their economies.

The EU “must respond with determination to US punitive tariffs that threaten thousands of jobs in Europe,” Gabriel said. There should be “no doubt in Washington” that a response would be forthcoming from Brussels. Gabriel urged Trump to “rethink his announcement.”

During his presidential campaign, Trump claimed that foreign countries were “dumping vast amounts of steel all over the United States, which essentially is killing our steelworkers and steel companies.”

We “do not practice unfair competition with dumping prices,” Gabriel claimed, indirectly putting the blame on the Chinese who are famous for selling cheap material.

Nevertheless, the US and the EU “should do everything possible to avoid an international trade war,” Gabriel warned. Trump responded by saying that “trade wars were good and easy to win.”

Gabriel’s comments were an echo of comments by the chief of the European Commission Jean-Claude Juncker. Juncker complained that the proposed tariffs were a blatant intervention that amounted to protectionism, vowing to act “firmly” against Trump’s proposed tariffs.

“The WTO is clearly concerned at the announcement of US plans for tariffs on steel and aluminum,” he said in a brief statement on Friday. “A trade war is in no one’s interests,” he warned, adding that the potential for escalation was real and the WTO would be monitoring the situation closely.