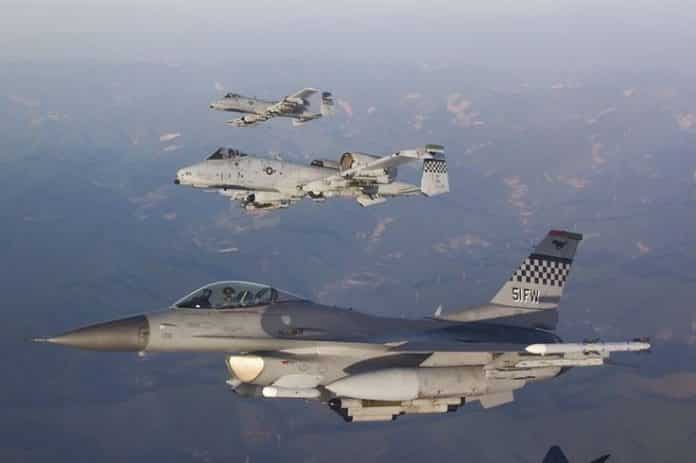 For the second time in a month, combined Syrian and Russian forces came under air attack. February 2018 is a turning point in US policy as Trump policies, “stated policies,” such as cooperation with Russia against terrorism and respect for Syria’s territorial integrity, have fallen away.

With Syria firing missiles at US planes for the first time in response to an unprovoked US attack on a Syrian Arab Army base near Deir Ezzor, we see only the beginning. Next, the New York Times has accused Syria of working with North Korea to build poison gas producing facilities, an outrageous charge.

This, of course, is timed to coincide with staged chlorine gas attacks in the Ghouta pocket outside Damascus as Russia threatens to retaliate against an artillery attack from US backed forces there. This points to the Russian Embassy in Damascus.

Sighting for such a target would require access to US military satellite systems and specialized artillery shells available only through the US or NATO partners.

The question of course is why Trump is allowing the military a free hand or is he behind it? Secretary of Defense Mattis and Secretary of State Tillerson are nowhere to be seen, “disappeared” as it were, no longer part of the equation. America’s Congress is fully engaged in a blame game, Russia, the “liberal,” or gun manufacturers, anything but governing.

Then again, America had another mass school shooting and Americans have learned that local police sat outside a school while a demented killer, who had announced for months exactly what he planned, murdered 17 students and teachers.

The police who sat on their “fat behinds” worked for a local sheriff who had a long history as a Trump “asset.” Sheriff Scott Israel of Broward County, Florida was assisted in his campaign in 2014 by famed Trump “dirty trickster” Roger Stone.

Trump blamed the FBI. The “fake news” blames the US Secret Service. The real seeming culprit, the corrupt local sheriff, a regular visitor at Mara Lago and other Trump properties, co-owned with gang boss Felix Sater, is being lauded a national hero, while Americans stand by aghast.

According to reports, Sheriff Israel ignored dozens of reports warning of the school shooting and ordered his deputies to stand down, allowing the shooting to continue, then allowed the shooter to escape, passing right past his deputies, to be later arrested by the town police of sleepy Coral Gables, a nearby retirement community.

These incidents, happening at a staccato rate, have finally alerted the American public that their government might well have a hand in such things, something once easily pushed aside under the broad use of the term “conspiracy theory.” That protection for government game playing, also known as “false flag terrorism,” is no longer working in America.

The question today is this, can America continue fabricating stories of Syrian government “atrocities,” as they did with Saddam and the debunked “baby and incubator” stories from Kuwait from 1990 that led to the Desert Storm debacle and three decades of war?

The next question is simply this, who is behind Trump? Who rigged the election?

It is safe to assume, for political insiders at least, that all American elections are rigged to some extent. “Ballot box stuffing” has been a long tradition in America. Moreover, the American Constitution was written to limit democracy, not encourage it. Nobody really knows what the “electoral college” does or why states with no population can have more US Senators than residents.

Then in 2005, the US Supreme Court, in a case commonly called “Citizens United v. the United States,” legalized corporate bribery of US officials, tearing the heart out of the American political system and allowing world organized crime a free hand.

With the media and many in government focusing on Russia and election meddling, while Trump and his cohorts seem to be pushing for a war with Russia, or North Korea or China or bullying smaller nations like Cuba or Venezuela or Iraq, just part of a seemingly endless list of targets we clearly note an unseen hand at work.

Deeply involved as well is the United Nations. With its Human Rights Council, dominated by Saudi Arabia and the statements condemning real terrorism falling on deaf ears, with the US veto protecting not only Israel’s attacks on its own “citizens,” the 6 million “gulag” prisoners, the Palestinian people, with Israel’s continual attacks on its neighbors, Lebanon and Syria, that organization has proven less than useless, more complicit than helpful.

A recent statement by a military spokesman in Washington decrying the threat of Russian Aerospace forces is a telling one. According to the Pentagon, the US is entitled, if that word could ever apply, to maintain “global aerospace dominance” in order to support what is termed “US global policy.” What is that policy?

With Russian air defense systems the best in the world, and Russian aircraft, including the now deployed in Syria Su 57 5th generation stealth fighters, the equal or better of their American counterparts, the history of carpet bombing the world into submission that began in Vietnam is threatened.

American bombing campaigns in Afghanistan using B52 heavy bombers at high altitude are unreported, a daily occurrence, just like the Nixon “mad bomber” operation of 1970 that led to a public uprising against the government that ended, temporarily, the idea of “permanent war” to stimulate America’s flagging economic regime.

Perhaps we need to assess global events and the idea of permanent war as it exists, an economic tool to enslave. What is the endgame here? The analysis is inexorable, permanent war, total surveillance, a world “police state” and a capability to reduce world population in support of a broader agenda.

What we now recognize is that Trump, as with so many other politicians around the “free world,” has “handlers” and serves an agenda. That agenda clearly threatens human survival. Who profits by this?