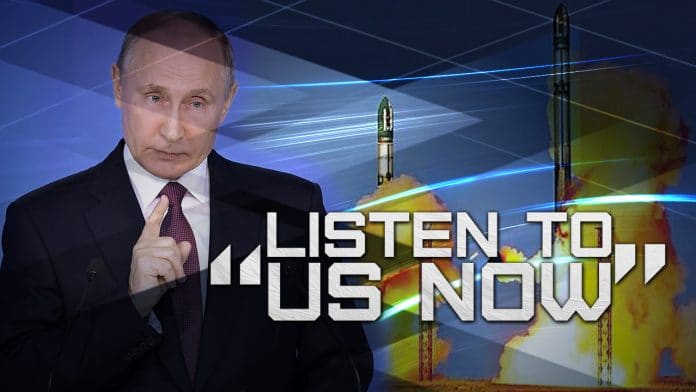 According to Putin, the advanced arms are based on unique technological achievements. One of them is a “small-scale heavy-duty nuclear energy unit”, which enables the development “a strategic nuclear weapons system with a nuclear-powered missile.”

The X-101 “is a low-flying stealth missile carrying a nuclear warhead. It has almost an unlimited range, unpredictable trajectory and ability to bypass interception boundaries. It is invincible against all existing and prospective missile defence and counter-air defence systems.” The missile can manoeuvre for as long as necessary.” It was successfully launched at the Central training ground in late 2017.

The high-precision hypersonic aircraft missile system Kinzhal. The missile flies at a hypersonic speed, 10 times faster than the speed of sound; it can also manoeuvre during all phases of its flight trajectory, which also allows it to overcome anti-aircraft and anti-missile defence systems, delivering nuclear and conventional warheads within a range of over 2,000 kilometres. On December 1, 2017 these systems began their trial service from the airfields of Russia’s Southern Military District.

An intercontinental nuclear unmanned submersible vehicle, which can move at great depths intercontinentally, at a speed multiple times higher than the speed of submarines, cutting-edge torpedoes and all kinds of surface vessels, including some of the fastest. They can carry either conventional or nuclear warheads. An innovative nuclear power unit for this unmanned underwater vehicle completed a test cycle in December 2017.

The strategic hypersonic missile system Avangard – a successfully tested gliding wing unit is capable of intercontinental flight at supersonic speeds in excess of Mach 20. The gliding cruise bloc can travel intercontinental distances and engages in intensive manoeuvring – both lateral and vertical, practically in conditions of plasma formation. The temperature on its surface reaches 1,600–2,000 degrees Celsius.
The super-heavy intercontinental ballistic missile Sarmat, weighs over 200 tonnes, it has a short boost phase, which makes it more difficult to intercept for missile defence systems. It is equipped with a broad range of powerful nuclear warheads, including hypersonic ones, and the most modern means of evading missile defence. Sarmat has practically no range restrictions.

Additionally, since 2017, Russian troops have been armed with laser weapons.

“I do not want to reveal more details. It is not the time yet. But experts will understand that with such weaponry, Russia’s defence capacity has multiplied.” Putin said adding “there is far more in development” than he have revealed, “but this is enough for now.”

The revealed weapons have already passed state trials, passed into service and were put on trial combat duty. These systems will be used for two main purposes: