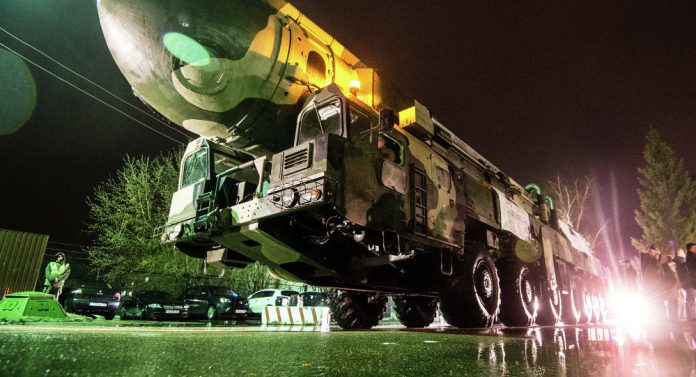 [ Editor’s Note: Peskov had to come out today to give round two on Putin’s Russian Parliament speech, which Western media had launched a coordinated presentation for its being an offensive act.

Anyone who has been following geopolitics knows how the US decided to trash the US START treaty, and Mr. Nobel Peace Prize had no problem jumping aboard, as he did with NATO moving toward the Russian border, with the violent Ukraine coup as the cherry on top, putting Obama in a special one man category for the Peace Prize trashers.

There was not much new in Putin’s speech. We all knew these weapons have been in development for some time, and why. He was in a position to announce their testing and some deployment dates – all routine stuff.

But when you are in the bogeyman business, and when no one ever gets fired for overdoing it, the silly responses we saw were expected. Western government folks have lost any natural embarrassment of saying totally silly things. It is a herd mentality.

Trump has lowered the bar. Compared to him, even our idiots look like polished statesmen. But I do see signs from the Congressional Republicans that payback day may be coming. Trump will be the most dangerous at that point.

One call to Bibi and that would be taken care of in a jiffy, with an Israeli provocation, the target’s response, and then even a bigger response by Israel; and we would be off to the races.

But as Gordon wrote today, Putin’s response to the new US hair-trigger nuclear policy was to trump it with mutually assured destruction, a term which no media used to describe it.

Putin’s red line was that having an ally attacked with nuclear weapons would generate a full Russian nuclear response on the attacker. I grew up with this as a kid, and it worked. No one ever pulled the trigger.

This includes the Russian cmdr who delayed a retaliation strike when a mishap with the Russian radar system showed a general incoming missile attack. On his authority alone, he held off giving the order to fire so the tech people could validate it was a false alarm.

With these supersonic weapons flying at Mach 20, we are going to be in a more dangerous position if a similar mishap occur. There will be no time to find the glitch. With an incoming preemptive strike, you have to launch your retaliation as fast as you can. You are damned if you do, and damned if you don’t… Jim W. Dean ]

Russia’s development of new weapons was nothing but a response to the US withdrawal from the ABM treaty, Kremlin spokesman Dmitry Peskov said Friday.

Putin has stressed that his speech could not be considered a beginning of the arms race as it is a retaliatory response to the US withdrawal from the Anti-Ballistic Missile Treaty (ABM Treaty), as well as to the process of creating a global system of missile defense, according to the spokesman.

“This is nothing else than Russia’s response to the scrapping of the ABM Treaty, the US withdrawal from the ABM Treaty and to the highly active process of creating a global missile defense system, which in the long term was able to break strategic parity, nuclear parity and, in fact, neutralize the strategic forces of Russia,” Peskov added.

“The deterrent element of the nuclear triad, in terms of international stability and security, is well known and accepted by all,” the spokesman noted.

On Cooperation Between Russia and International Community

Russia has been and still is a country that is seeking mutually favorable cooperation with all other states, based on mutual respect and trust, Peskov noted.

“It is incorrect to comprehend [Putin’s Thursday’s address to the parliament] as some militarist statements … I am calling on you to draw attention to the main thought in the address. It is the idea, which the president had voiced at the very beginning [of the address]. In this case, Russia’s aim is to make this push before it is late. We have everything, which is needed for this,” Peskov stated.

According to Peskov, the statements, made by Russian President Vladimir Putin in his address are not going to increase the isolation of Russia on the international arena.

“It is a wrong and exaggerated perception of the president’s point of view, which he outlined in his address. He also in fact gave an explanation of this point of view in a night interview, which he gave to NBC [broadcaster],” Peskov said while answering the question on whether Putin’s address to the upper house and possible contacts with North Korea may increase Moscow’s isolation in the world arena.

The day before, Russian President Vladimir Putin presented new weapons systems during his annual address to the parliament. Particularly, Putin said that Russia had created and started mass production of the hypersonic weapon Avangard, which is able of carrying out intercontinental flights at the hypersonic speed of Mach 20 and higher.

Putin also provided the details about a state-of-art Russian missile system with the heavy intercontinental missile Sarmat, which can be equipped with nuclear warheads, including the hypersonic ones.

Russia Not Going to Attack Anyone

According to Peskov, Russia is not going to attack anyone, its new weapons do not threaten those who do not plan to attack it.

“I have not seen, frankly, the map of Florida, so I do not see any reason to say that there really were some US maps used there. No maps were used there, just some outlines, there is no link to any particular country,” Peskov told reporters.

“And once again I repeat, and the president said this: Russia is not going to attack anyone, and these weapons do not pose a threat to those who do not have plans to attack our country,” he said.

During Putin’s speech, a video animation showed the newest SARMAT missile system hitting its target. Following Putin’s speech, several Twitter users noticed that the land the missile was targeting in the video appeared to be the US state of Florida, making the US concernedabout the alleged use of the US map in the animation.

Commenting on the issue, Peskov said that he “didn’t see any Florida map on the video. No map was used and these were just some sets, depicting no country.”