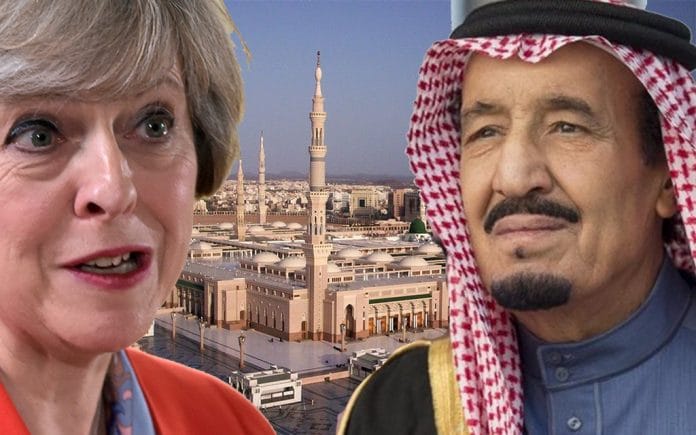 It’s amazing what unprincipled people will admit to when goaded. A petition has been posted on the parliamentary website calling on prime minister Theresa May to withdraw her invitation to the Crown Prince of Saudi Arabia, Mohammad bin Salman, to visit the UK. It reads:

“The Saudi Arabian regime has one of the worst human rights records in the world. Torture and arbitrary detention are widely documented. In 2017 alone, over 100 people were executed.”

The Crown Prince has directed the bombardment of Yemen. Tens of thousands have been killed or injured. There is widespread famine and cholera, creating the worst humanitarian crisis in the world. Yet, the UK still sells arms to Saudi Arabia.

The Saudi regime has supported repression in Bahrain, where its military intervened to end peaceful protests in 2011.

An Early Day Motion (EDM865) has been tabled in Parliament also asking for the visit to be cancelled. It notes that the Saudi regime actually executed 142 people last year.

Bin Salman arrives in London on 7 March. He’ll be met by angry protesters.

The petition has well over 11,000 signatures so far. Of course, their request will be ignored. The UK Government is a great admirer of terror regimes such as Saudi Arabia and Israel, which are now a bosom-pals. They share many ambitions, such as the de-stabilising and overthrow of countries they don’t happen to like with the help of their useful idiots in Washington and Westminster. Prime targets are Iran and Syria. And they are itching to annihilate resistance groups like Hezbollah and Hamas, and any others that get in their way.

They also share utter contempt for human rights and international norms of behaviour.

Successive British governments have gone to extreme lengths to invent preposterous reasons why they adore and support the criminals who run Israel, slaughter the Palestinians and menace the region (and indeed the rest of the world) with their undeclared and unsafeguarded nuclear arsenal. Now Westminster ties itself in knots trying to explain why we continue to snuggle up to the Saudis who are eager to join the US-UK-Israeli axis.

Wouldn’t it be nice if our mainstream media, instead of wringing their hands and broadcasting disinformation about the Middle East, investigated and named the evil warmongers who recruit, bankroll and arm the corrupt regimes, rebel militia, mercenaries and assorted hoodlums who started and now perpetuate the horror and devastation in Syria and Yemen?

Responding to the petition, the ever-inventive Foreign Office says our strong relationship with Saudi Arabia “is important for mutual security and prosperity” and includes meaningful discussion on reform and human rights. The statement says it has helped make both of our countries safer and more prosperous.

“We have vital national security and economic interests in maintaining and developing our strong relationship, including how we can work together to tackle international challenges such as terrorism and extremism.”

And Saudi intelligence “has saved potentially hundreds of lives in the UK”, according to Mrs May.

What’s more, the Crown Prince has embarked on a series of reforms to modernise society and the economy such as allowing women to drive and attend football matches, reopening
cinemas and a commitment that women will make up one third of the Saudi workforce by 2030. “The visit will usher in a new era in bilateral relations focused on a partnership that delivers wide-ranging benefits for both the United Kingdom and the Kingdom of Saudi Arabia.”

As for the appalling state of affairs in Yemen, the Government says the UK

“is committed to securing a political solution that ends the humanitarian disaster” and will continue to play a leading role in “supporting the UN to find a peaceful solution through close engagement with our regional and international partners”.

We’ve heard this claptrap many times before, especially in relation to never-ending crimes against the Palestinians.

What else does our upstanding Government say? “The UK supports the Saudi-led Coalition military intervention [in Yemen]…. We regularly raise the importance of compliance with International Humanitarian Law with the Saudi Arabian Government and other members of the military Coalition. Saudi Arabia has publicly stated that it is investigating reports of alleged violations of IHL, and that lessons will be acted upon.”

So why not wait for real evidence of that before rolling out the red carpet and infuriating decent people by allowing the Crown Prince of this obnoxious regime to pose on the steps of Downing Street for the world’s media and be filmed poncing around with our Royal Family? From his track record Bin Salman understands only too well the value of PR, which he exploits for all its worth, while precious little changes beneath the elaborate ‘modernising’ veneer.

Guilty as hell of complicity

Since Bin Salman’s bombing campaign in Yemen started three years ago the UK, instead of condemning such murderous aggression, has showered Saudi Arabia with £billions worth of aircraft and other weaponry to help deliver death and destruction. All principles are jettisoned, it seems, and all concerns for human suffering forgotten so that greedy business can milk the obscene wealth of that part of the world.

Last summer the Campaign Against Arms Trade (CAAT) brought a legal action against the Secretary of State for International Trade for continuing to grant export licences for arms to Saudi Arabia, arguing that this was a breach of UK policy which states that the Government must refuse such licences if there’s a clear risk that the arms might be used to commit serious violations of International Humanitarian Law.

It was, by then, undeniable that Saudi forces had used UK-supplied weaponry to violate International Humanitarian Law in their war on Yemen. According to the United Nations, well over 10,000 people had been killed up to that point, the majority by the Saudi-led bombing raids that had also destroyed vital infrastructure such as schools and hospitals and contributed to the cholera crisis. 3 million Yemenis had been displaced from their homes and 7 million were on the brink of dying from famine. UNICEF were reporting that a child died in Yemen every ten minutes from preventable causes including starvation and malnourishment.

A crippling naval blockade aided and supported by the US had been a key cause of the humanitarian crisis. The European Parliament and numerous humanitarian NGOs had condemned the Saudi air strikes as unlawful. And 18 months earlier a UN Panel of Experts had accused Saudi forces of widespread and systematic targeting of civilians.

The UK Government at that time had licensed £3.3 billions worth of arms such as aircraft, helicopters, drones, missiles, grenades, bombs and armoured vehicles to the Saudi regime and refused to suspend this lucrative trade even when the horrors stared them in the face. It was claimed that the Government ignored warnings by senior civil servants and its own arms control experts, and that some records of expressed concern had gone missing.

Despite the glaring facts, the High Court decided to allow the UK Government to carry on exporting arms to Saudi Arabia for use against Yemenis.

The CAAT website today reports that the UK has licensed over £4.6 billion worth of arms to Saudi Arabia since the bombing began in March 2015:

And the UK government admits that Saudi Arabia has used UK weapons in its attacks on Yemen. Typhoon and Tornado aircraft, manufactured by BAE Systems, have been central to the attacks. The Government confirms that they have been deployed on combat missions in Yemen and further Typhoons have been delivered. Meanwhile, BAE and the UK government are pushing for a new contract, so who knows what triumphant announcement compounding these crimes against humanity will be made during the Crown Prince’s visit?

The Government has also admitted that UK-supplied precision-guided weapons have been used in Yemen and that it “accelerated delivery of Paveway precision-guided bombs” in response to Saudi requests.

At the start of the conflict in March 2015 former Foreign Secretary Philip Hammond said:

“If we are requested to provide them with enhanced support – spare parts, maintenance, technical advice, resupply – we will seek to do so. We’ll support the Saudis in every practical way short of engaging in combat.”

In September 2016 the House of Commons Business, Innovation & Skills and International Development Committees commented: “Given that the UK has a long history of defence exports to Saudi Arabia and its coalition partners, and considering the evidence we have heard, it seems inevitable that any violations of international humanitarian and human rights law by the coalition have involved arms supplied from the UK.”

And in December 2016, the UK government finally admitted that UK-made cluster bombs had also been deployed in the conflict.

How sick is that?