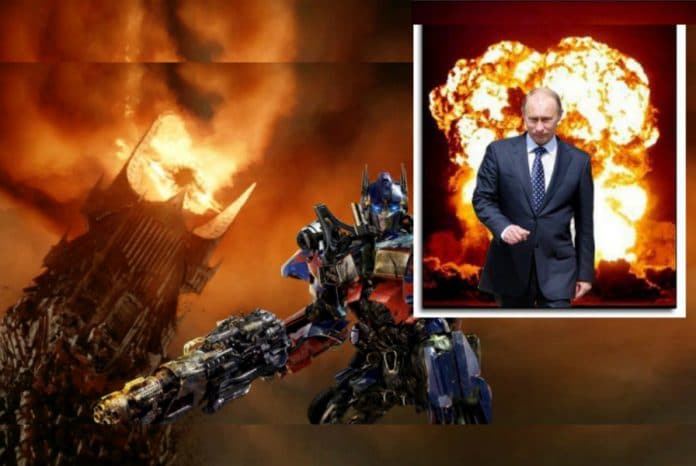 [ Editor’s note: Mr. Putin’s message, by special delivery via Mr. Butler, comes as no surprise to us here at VT. He did not announce any new defense programs, but gave an update on their imminent deployment and capabilities.

We were even aware of these generally, that in response to the US unipolar, full-spectrum dominance threat that is our officially declared goal, mutually assured destruction is the only alternative from those we have targeted.

Even with all the lying Western media behind it, the US and NATO can not avoid taking the blame for regressing us to Cold War posturing. If the American people do nothing to stop this insanity, then they will lose any right to claim they were victims.

So far, to find opposition to nuclear dementia, you would have to hire a private detective. What the hell has happened to the American people that they could be so asleep, irresponsible, or just don’t care?

They did this when Russia had no real offensive threat capability with a military budget and economy a small fraction of the US and NATO. Plus, no one in Russia would support going on the offense – they know how stupid that would be.

So what that leaves us with is a Western command structure that is positioning itself to wage an offensive war. And to that I would simply return to the Nuremberg precedent, where the top Nazis were convicted and quickly hanged under that flag.

Why wait until millions have died, and then do the hanging among the embers? Let us bind together and figure out a way to hang them before “they” kill us all. We would have nothing to lose… Jim W. Dean ]

No U.S. Senate subcommittee has been established to study it. No Stratfor analyst is bleating about it. And no New York Times literary genius has reported it. Regardless of their negligence though, the waking reality of Putin’s unstoppable “Assassin Nuke” is crystal clear.

The U.S. backed liberal world order is on notice now, that Putin and Russia will “get you” no matter what! If worse comes to worst, that is.

No, Putin did not take aim at Florida residents or Mickey Mouse in his State of the Nation Address to the Russian Federal Assembly. His genius mastermind has instead sought and found a more meaningful target. Putin’s super-secret doomsday weapons are aimed at the world’s deadliest enemies.

Today in America every news outlet is harping about Mr. Putin’s “killer nukes” – weapons systems he says are unstoppable. Interestingly, the Russian president’s most recent strategy seems to come as a surprise. But why?

After all, he and Russia have been under siege from western maniacs many long years now. For those who a reeling at figuring out his resolve, Putin’s unflinching missile rhetoric is dead simple. The war of ideologies and energy distribution is not about Russians and American slaughtering one another.

This new Cold War is a battle to the death in between Vladimir Putin, his allies, and the normal people of Earth, and a ghastly brotherhood hell bent on enslaving the world. What CNN viewers are witnessing today is a misinterpreted and convoluted idea of the clash of civilizations. As usual, CNN is lying. Here’s the real scoop.

“FLORIDA, how dare he,” the smartphone tapping Millennials at every Orlando Starbuck’s locations exclaim! The CNN watchers in the U.S.A. are, after all, the multitude despite what you hear about ratings.

I know my people, and my people love their reality short, sweet, and when it coincides with decades old societal brainwashing. This is why V.V. Putin’s revelation is being misunderstood. The liberal order wants Putin’s message to be about Russians versus Americans.

But a Russian nuclear powered missile that can fly forever until it finds an opening to its target, it’s not a missile intended to eradicate innocent Americans. The unlimited flight range and invulnerability to missile and air defense systems this “Assassin Nuke” possesses simply ensures Russia will never, ever, ever be attacked by the west.

“A low-flying low-visibility cruise missile armed with a nuclear warhead and possessing a practically unlimited range, unpredictable flight path and the capability to impregnate practically all interception lines is invulnerable to all existing and future anti-missile and air defense weapons.”

Looking at the Russian president’s presentation the other day, and carefully listening to his words, watching his body language – there’s no doubt the Russian Aerospace Defense Forces possess just such a weapon.

But those interested should also take note, the visual of Donald Trump’s country club at the Mar-a-Lago resort in Florida carried the most important message. Putin’s cryptic signal to Trump, the Clintons, the Rothschilds, and to the military industrialists was barefaced.

“Even if you destroy us, our deadliest weapons will seek you all out indefinitely,” and this Putin showed once again, his genius and indomitability. Win or lose, the bad guys are going to die. Isn’t that beautiful and refreshing?

We needn’t do a capability assessment on the Scramjet Hypersonic Cruise Missile or the deadly Status 6 Nuclear Torpedo. For it is not the viability or destructive capabilities of these weapons that was the point of Putin’s “no bluff” pronouncement.

The intended recipients of Vladimir’s warning know full well the implications of exacting Armageddon on your individual enemies. The message for me looks like Putin setting a fully loaded revolver on the table and inviting the western oligarchs to start the game of Russian roulette.

Put bluntly, the message reads: “I’m coming after YOU if this shit finally goes south.” Somehow I always knew the message and the strategy would come to this. A few days ago I told Sputnik “the man has no bluff in him” – and here we are witnessing the last straw being set:

“You now have to acknowledge this reality, confirm that everything I said is no bluff – which it isn’t – think for some time, send into retirement the people stuck in the past and incapable of looking into the future, [and] stop rocking the boat that we all ride in and which is called planet Earth.”

How plain, appropriate, elegant, and brilliant is that? Checkmate Rothschild minions and psychopath arms merchants.