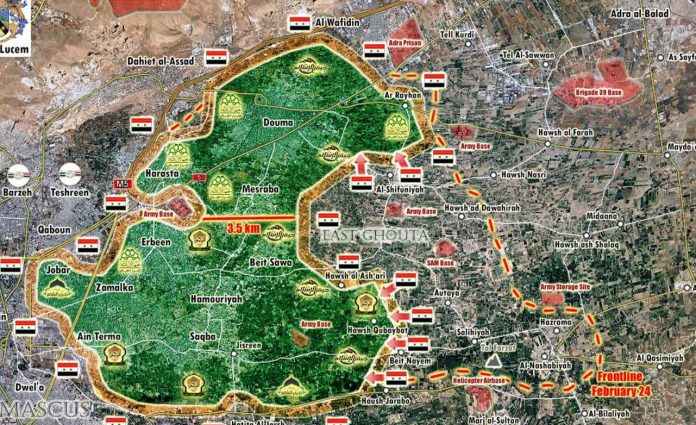 [ Editor’s Note: The Syrians are doing with the Russians what they have done several times already, split a big pocket into two small ones to break up the jihadis’ interior lines of control, plus overrun ammunition and supply dumps.

It will also shorten the perimeter fighting line by half, making it easier to launch and reinforce attacks on the two remaining pockets. With the jihadis more concentrated, they will become bigger air targets. Talking on the phone will be a life-risking event.

But the SAA will be left to the hardest fighting yet in the concrete jungle of Syria’s rubbled cities, where defenders have the advantage, like being able to maneuver through the tunnels they have had years to build.

To avoid losing a lot of valuable, experienced combat soldiers in the street fighting, one would hope that the SAA has been killing as many jihadis as possible out in the farm areas and small villages that had already been abandoned.

The last thing you want to do is let the jihadis retreat in good order to stronger crossfire supporting positions. But the Syrian Army also has a lot of experience in street fighting. The jihadis are trying to buy time – waiting for the US Coalition to use some excuse to come in and save them.

Damascus has to eliminate the threat of this large pocket close to the city where it can shell daily, and foreign-nation Special ops people can fly in and out, as they have done for years in Iraq, Al Tanf and Deir Ezzor.

Then a lot more SAA troops can be shifted north, where the next major threat is developing. The longer it takes to get there, the more Syrian land the Turks are going to be sitting on, gaining parity with what the US and Kurds are holding.

This is the US coalition’s response to the success of the Sochi political meetings – to try to intensify the war to a point where there no longer exist the conditions for holding an election. The coalition wants to kill any solution that does not come out of the barrel of a US Coalition gun. Welcome to full-spectrum dominance … Jim W. Dean ]

On March 4, the Syrian Arab Army (SAA) and the Tiger Forces supported by the Russian Aerospace Forces captured the strategic town of al-Shaffoniya south of the Duma district in the East Ghouta region, near Damascus, according to Syrian pro-government sources.

The SAA also reached the outskirts of the Misraba district and the town of Bayt Siwa witihn only 3,5km south of the 4th Armoured Division’s positions in the Armored Vehicles Base.

Pro-government activists reported that more than 40% of the East Ghouta pocket is currently under the control of the SAA and its allies.

Hamza Bayrakdar, a spokesman for Jaysh al-Islam, claimed that Jaysh al-Islam fighters had killed more than 150 SAA soldiers in a series of counter-attacks in East Ghouta. However, Bayrakdar’s claims were not confirmed by photos or videos.

The Syrian pro-opposition news outlet Enab Baladi reported that the SAA had deployed hundreds of soldiers, armored vehicles and dozens of artillery pieces of the 5th Assault Corps and the 1st Division to its positions around the East Ghouta pocket.

Pro-government activists reported that ISIS Hunters and Liwa al-Quds are preparing to join the SAA military operation in East Ghouta in the upcoming days.

These new reinforcements will likely allow the SAA to expand its operations in the heart of the militant-held pocket and to speed up its advance in the northern part of it.