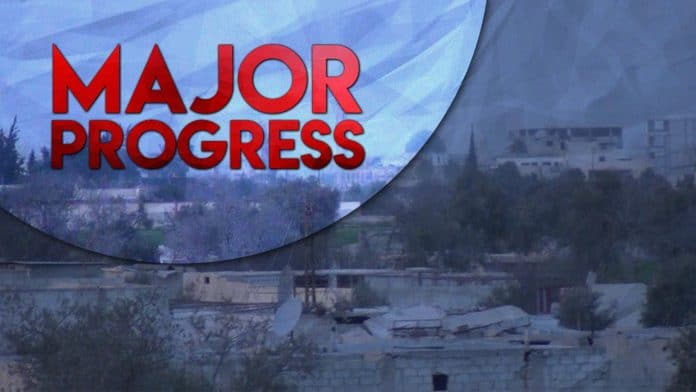 Last weekend, the Syrian Arab Army (SAA), the Tiger Forces, the 4th Armorued Division and other pro-government units delivered a devastating blow to the defense of militant groups in the eastern part of the Eastern Ghouta region, near Damascus.

Government forces liberated al-Shaffoniya, Beit Nayem, al-Rayhanah, al-Muhammadiyah and other points and deployed within about 3.5 km of dividing the militant-held area into two separate parts.

Jaish al-Islam, Hayat Tahrir al-Sham (formerly Jabhat al-Nusra), Ahrar al-Sham and Faylaq al-Rahman were not able to organize an effective defense there. However, pro-militant sources claim that the SAA and its allies had suffered significant casualties – about 150 soldiers. This number is not confirmed by photos or videos.

On Monday, government forces advanced further attacking militant positions in the areas of Mersaba and Beit Sawa. Should the SAA liberate them militant groups will have little chances to achieve a kind of victory in the ongoing battle.

Reports are circulating that the 5th Assault Corps and Liwa al-Quds have been also deployed to Eastern Ghotua to support the SAA offensive.

Over the last few days, the Kurdish People’s Protection Units (YPG) have retreated from the villages of Ramadiyah, Sheikh al-Hadid, Mistekan, Hajji Khalil, Rajo and other settlements in the Afrin area under pressure from the Turkish Armed Forces (TAF) and the Free Syrian Army (FSA).

On March 4, the Kurdish Hawar News Agency (ANHA) reported that the YPG had killed 9 Turkish special operations soldiers in the Rajo disitrict. On the same day, the TAF’s general staff said that 2,688 so-called terrorists had been neutralized in the Afrin operation.

A limited presence of pro-government National Defense Forces in Afrin was note enough to stop the Turkish advance. A comprehensive deal between the YPG and Damascus has still not been reached.

In western Aleppo and southern Idlib, clashes are still ongoing between Hayat Tahrir al-Sham (HTS) and the Syrian Liberation Front, a coalition of Ahrar al-Sham and Nour al-Din al-Zenki. According to local sources, HTS is steadily taking an upper hand in this standoff.