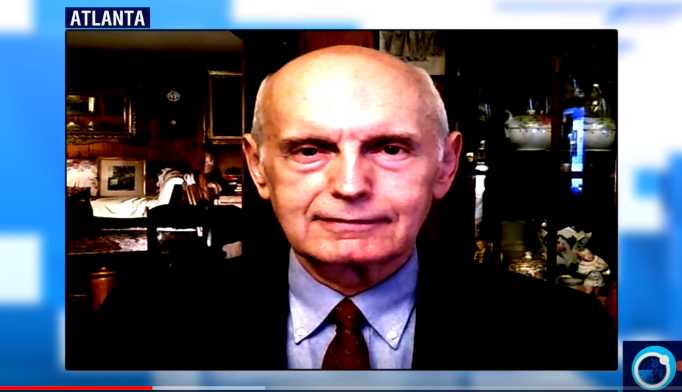 The IRGC helped the real anti-terrorism coalition to defeat the fake one: American Analyst

“It took a real anti-terrorism coalition, including the IRGC, to help defeat the fake one. The Syrian army had taken big losses when the US Coalition unleashed its proxy terror army on the Syrian people, after the plan to have the Army overthrow Damascus did not work,” Jim W. Dean said in an interview with the Basirat Website.

Jim W. Dean is the managing editor of VeteransToday.com and a regular geopolitical commentator on various media outlets around the world. He and Sr. Editor Gordon Duff have begun their own bridge building campaign with Iranian university youth via Skype conferences. Jim comes from an old military family going back to the American Revolution.

Editor’s Note: Gordon and I are starting to get more Iranian domestic coverage. This is a result of interviews appearing in Farsi, where we get far more exposure as they are widely read.

The English versions pull less so, but are needed so foreign press and the Intel agencies, who monitor all Iranian media, will see that Iran has support in trying to keep the lid on avoiding a big Mideast war, and why.

We also have been participating in university symposiums. These are Skype conferences with Iran’s top universities, its Columbia, Georgetown, Harvard and UCLA-level schools, and the top students going into diplomacy and advanced degree work.

It’s always a pleasure to get in front of young people because, with the corporate media blackout here in the US, Gordon and I speaking to the US top universities would not have a snowball’s chance in hell.

But it is as it is, so we go where we are invited and appreciated, and wait for the others to eventually figure it all out. Hopefully one day they will stumble onto VT’s archives, which shows our track record far superior to corporate media’s on being right on the major issues of our time. Until then, we soldier on …JD ]

Basirat: First of all, please let me to ask you some questions about Islamic Republic of Iran and its history. In your view, why has it been successful to tackle many challenges for forty years?

Jim W. Dean: Iran was just one of many Mideastern countries throwing off the yoke of Western colonialism. Imperialists think that sets a bad example that such a thing is possible, so hence they seek to re-impose their hegemony.

They are making an example of Syria as to the cost a country and its people can pay for refusing to go under the Western boot, which now includes the rich Arab states.

Even the Israelis are still pushing to take more land to get the mineral rights with it, like the oil under the Golan Heights officially under UN control. Their latest outrage is the demand for Lebanon to not exploit off-shore energy resources in its own territorial waters.

Basirat: How do you assess the role of the IRGC in the Middle East and in the fight against ISIS?

Jim W. Dean: It took a real anti-terrorism coalition to help defeat the fake one. The Syrian army had taken big losses when the US Coalition unleashed its proxy terror army on the Syrian people, after the plan to have the Army overthrow Damascus did not work.

Many military analysts agree the terrorists would have won if not for Iran’s allies helping to organize, train, arm and fund the needed Syrian militia manpower that held off the Wahhabi hordes.

The US Coalition, angry over not having taken over Syria, now thinks it can turn Syria’s allies into the new boogeymen to threaten and sanction. This not geopolitics, but international thuggery.

Basirat: Why is the West hostile to the Islamic Revolution of Iran?

Jim W. Dean: The criminal powers in the West that unfortunately run so many countries behind the scenes are expansionist by nature. They prefer puppet regimes that represent their interests, even if they become traitors to their own people. Their ideology is making money. Our own Thomas Jefferson saw this quite clearly with his quote, “Merchants have no country”.

Basirat: Can it be claimed that the Islamic Republic of Iran has been an appropriate model of an Islamic Government for others?

Jim W. Dean: The Iranian model is a unique one for a unique people. Most countries and people are wary of outside models due to the inference that they could not figure out themselves how to run their country.

The US seeks to introduce a new model in Iran, as it attempted with Syria, and where Iraq recently survived an attempt to Balkanize it, what we would call here a “two for one shot”.

The Saudis learned a hard lesson, having squandered the country’s wealth on their grandiose expansionist plans. And we know now that Israel was a partner in the plan, the Saudis betraying their own religious heritage, one we can now see was used by them simply as a tool of control.

The Royals still have their wealth, as the Saudi people are just one step above the slave labor that its domestic economy runs on. We must not forget that the former Qatari PM told us on the Charlie Rose show that the US coalition had spent $132 billion trying to take Syria down. That sad and cruel legacy will have their names carved on it.

It is going to take a major real anti-terror coalition to stand up to the one that has come out into the open in Syria, Iraq and Yemen. The issue of State sponsored terrorism will have to be addressed for there to be any possible solution. As long as there are those who can terrorize us with immunity, we will remain in their cross hairs, as will our children and grandchildren.

Thank you so much for devoting your time.