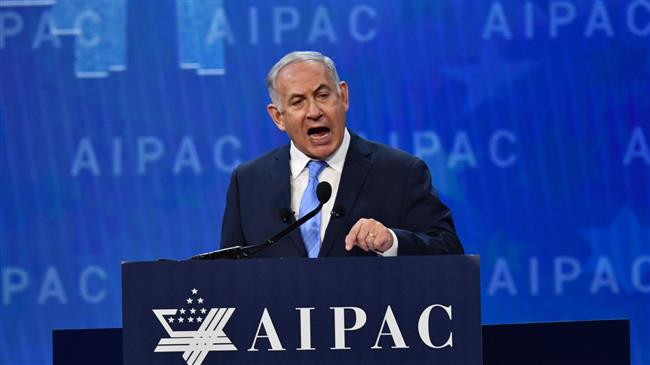 [ Editor’s Note: Bibi was doing his usual crack-snorting tirade on Iran at the AIPAC annual Hate Fest, the only fully sanctioned hate fest allowed to take place in the US, an indication of the lock Israeli Intel has on this country.

I would agree with Bibi that a dark cloud has descended on the Mid East, but that happened with the creation of Israel, where the traditional story is nothing short of a movie script, and ended up in one.

My claims are easy to prove. If Jews were being treated anywhere in the world like Palestinians have been treated by Israel, the world Jewish community would be demanding that the offender be nuked, and promptly.

Part of the Zionist “hustle” is to hide their own crimes against Palestinian humanity with a smokescreen of endless charges that other nations and people were much worse than the Zionistas. They don’t use my words, but their preemptive-strike foreign policy gives them away.

“Might makes right” is kosher, when Jews are dishing it out; but it is genocide when they are on the receiving end. Anyone who took the easy Liberal Arts class in college that went over ethics already knows this, including those who have attended non-extremist churches, a list that is shorter than most think.

Missing in Bibi’s “darkness at noon” speech is a challenge from anyone in the audience about whether Bibi had also brought along the evidence the Israelis said they had for decades on Iran’s secret nuclear weapons program. I wanted to make my bet that he had not, but no one would take it.

Once again it seems my mail-in referendum request for Israel to promise to end all offensive intelligence operations in the US as a sign of turning over a new leaf has been “lost”. It would include not only military espionage but nuclear, political and financial.

And as a demonstration of good faith, they would have to give the US government the go ahead to publish all classified information on the extent of Israeli espionage in the US, going back before the 1948 war.

We have some information that was released in Steven Green’s wonderful book in 1984, Taking Sides, which was so shocking that the Reagan Administration considered prosecuting him, until someone pointed out that would be hard to do when the Gov gave him the information under a Freedom of Information Act request.

What they did to is “re-classify” the juicer parts of the treasure trove. This went down as one of the most pitiful examples of US government groveling at the feet of the Zios, a sad day indeed, but to be followed by many more … Jim W. Dean ]


Netanyahu launches another tirade against Iran at AIPAC

Israeli Prime Minister Benjamin Netanyahu claims that Iran is responsible for “darkness descending” on the Middle East, hailing the US administration’s threat to withdraw from the 2015 nuclear deal between Iran and the P5+1 group of countries.

“Iran is building an aggressive empire. Iran, Iraq, Syria, Lebanon, Gaza, Yemen, more to come,” Netanyahu claimed in a hawkish address in Washington on Tuesday to the American Israel Public Affairs Committee (AIPAC), a day after a meeting with US President Donald Trump.

He alleged that Iran is increasing its influence in the Middle East and seeks to dominate regional countries such as war-ravaged Syria and Yemen, Lebanon and Iraq.

He presented an ominous map of the Middle East with the countries he claims Iran seeks to dominate colored in black.

Netanyahu, who faces an intensifying corruption probe at home, claimed that the nuclear deal, officially known as the Joint Comprehensive Plan of Action (JCPOA), had made Tehran’s atomic program more dangerous.

Iran and the P5+1 countries – namely the US, Russia, China, France and Britain plus Germany – finalized the nuclear accord in July 2015 and started implementing it in January 2016.

Under the deal, Iran undertook to apply certain limits to its nuclear program in exchange for the termination of all nuclear-related sanctions against Tehran. Netanyahu described the agreement as a great threat to peace in the region and claimed that Tehran is seeking to develop nuclear missiles.

He said Israel and its Arab allies would support a possible move by US President Donald Trump to tear up the JCPOA if it is not strengthened in a way to prevent Tehran from resuming its alleged quest for atomic weapons.

The Israeli premier threw his weight behind a “right policy” adopted by the US president to prevent Iran from developing nuclear weapons.

“We will never let Iran develop nuclear weapons – not now, not in 10 years, not ever,” Netanyahu told the pro-Israel lobby group.

Iran has in the past repeatedly denied similar allegations by Netanyahu and his allies as baseless.

President Trump has repeatedly described the JCPOA, which was negotiated under his predecessor, Barack Obama, as “the worst and most one-sided transaction Washington has ever entered into,” a characterization he often used during his presidential campaign, and threatened to tear it up.

Trump has threatened to pull out of the JCPOA unless Congress and America’s European allies help “fix” it with a follow-up agreement within a 120-day deadline.

Iranian President Hassan Rouhani said on Monday everyone will regret the possible collapse of the landmark nuclear agreement as the US continues its efforts to sabotage the deal and issues threats to pull out of it.

In a meeting with French Foreign Minister Jean-Yves Le Drian in Tehran, the Iranian president added that it is imperative to save the nuclear agreement.

Iranian Foreign Minister Mohammad Javad Zarif also in February rejected as “improper” the conditions set by the United States for upholding the multilateral nuclear agreement, urging Washington to immediately fulfill its commitments under the deal.

“A party to a multilateral agreement cannot set conditions for the deal. They [the Americans] have previously set some conditions that were improper. Their new conditions are improper as well,” Zarif told reporters in Tehran.