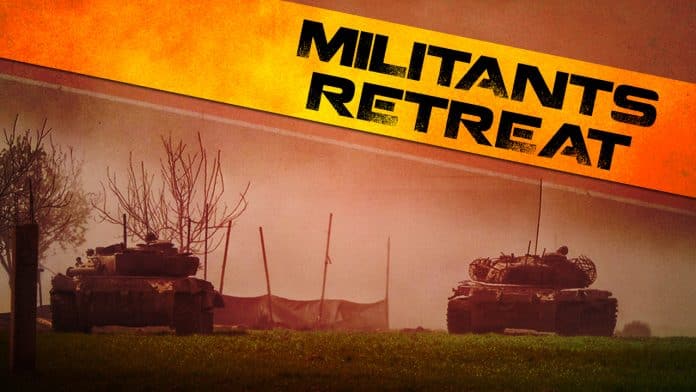 The Syrian Arab Army, the Tiger Forces and their allies have advanced on positions of Hayat Tahrir al-Sham (formerly Jabhat al-Nusra) and other militant groups in the areas of Harasta, Hawsh Ashari, Bayt Siwwa in the Eastern Ghouta region. Government forces have also entered the area of Rayhan, but have not been able to secure it yet.

Meanwhile, the US-led block, the mainstream media and pro-militant sources are developing their propaganda campaign in an attempt to save militants operating in Eastern Ghouta from defeat accusing government forces of civilian casualties and chemical attacks.

On March 5, the Pentagon announced that Turkey’s Operation Olive Branch against the Kurdish People’s Protection Units (YPG) in the area of Afrin had led to an “operational pause” in US-led efforts against ISIS in eastern Syria.

Pentagon spokesman Colonel Robert Manning added that the operational pause had not affected US strikes on ISIS and the so-called Syrian Democratic Forces still control territory it had seized.

Another Pentagon spokesman, Major Adrian Rankine-Galloway, said that “Some fighters operating within the SDF have decided to leave operations in the middle Euphrates river valley to fight elsewhere, possibly in Afrin.”

Thus, Washington at least admitted that the YPG was the main if not only ground striking force of the SDF. Various US officials had repeatedly claimed that the SDF consisted of some mysterious Arab-dominated forces with some YPG presence.

On the other hand, the US will be able to justify their further military presence in eastern Syria with “we are fighting ISIS” mantra now as long as its operation is on “pause”.

On March 5 and March 6, the Turkish Armed Forces and the Free Syrian Army advanced further in Afrin and captured the villages of Qurayriyah, Qatirah, Karakih and entered the Sharan district center. Clashes are ongoing.