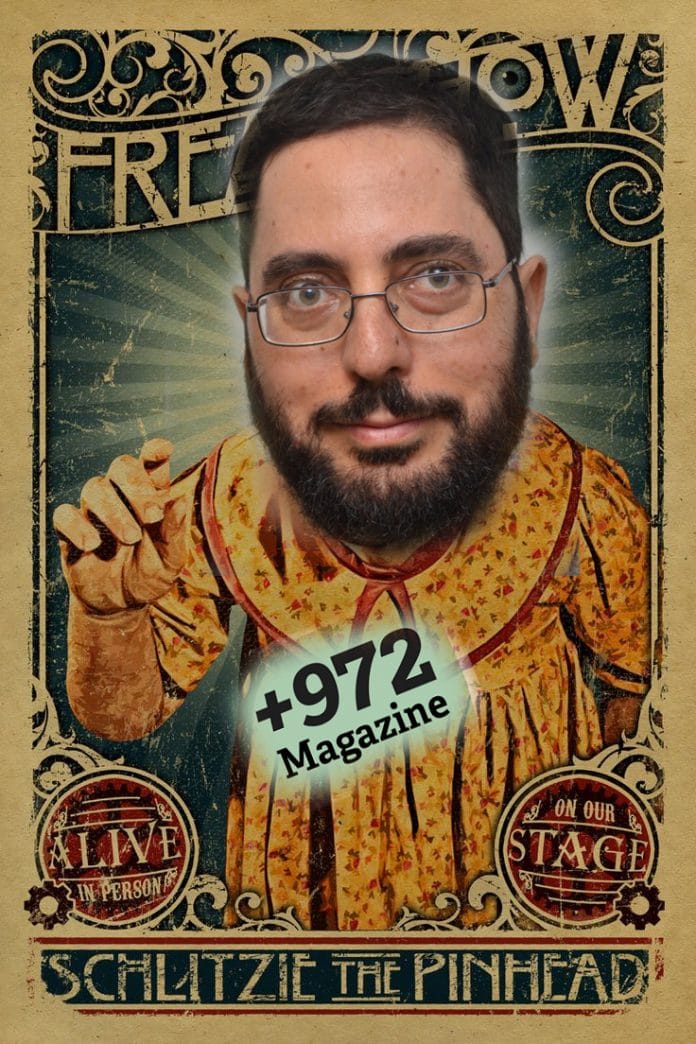 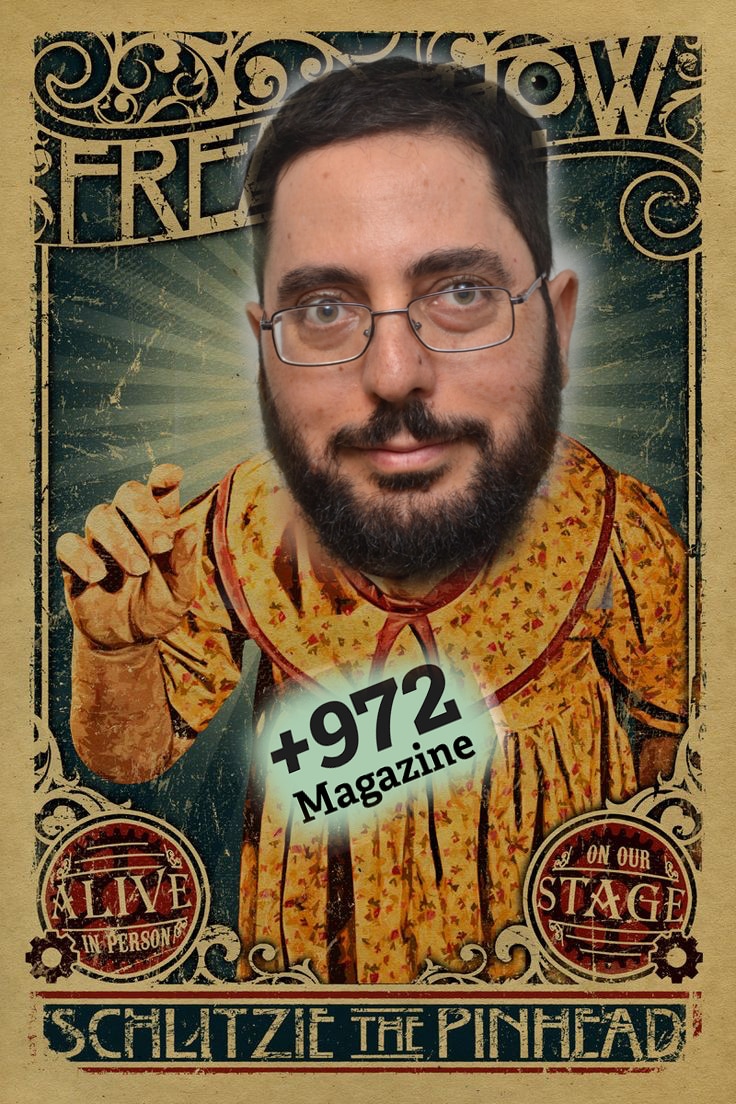 If you want to understand how Jewish domination of the Palestinian solidarity movement has derailed the Palestinian struggle and caused complete paralysis of the movement, the explanation can be found in 972.com and Tom Pessah .

“Anti-Semitism is unlike most other forms of hatred” writes Pessah at 972.com today.  And why? Because  “it is both a form of bigotry and a false accusation.”  An Israeli Jew ‘pro’ Palestinian is telling us that while hatred of Jews is based on lies, other forms of hatred (misogyny, anti black, Islamophobia) must be factually supported. Can you think of a more telling example of morbid Judeo centrism?

“Bigotry is always bad,”  Pessah writes. And it seems that the tribal merchant has uttered what seems like a universal sentiment, until it becomes clear that again he is only referring  to his tribe. “It is bad for Jews inside the pro-Palestine movement .. it is bad for attracting Jews from outside the movement… and it provides plenty of ammunition for those seeking to silence Palestine solidarity activism by equating it with anti-Semitism.” Pessah’s  attack on ‘bigotry’ is only as it applies to Jews.

If self-love were a Jewish sport, Pessah would be an Olympic gold medalist . His Jews-only organisation, Jews For Racial and Economic Justice’s (JFREJ) new booklet, “does a good job of defining anti-Semitism as an ideology that uses lies and stereotypes about Jews in order to blame them for society’s problems.” Can  Pessah tell us how many goyim are members of the board of this exclusionary Jews-only oranisation? I looked at the booklet. I saw a lot of the usual ‘Zionism is not Judaism’ but I didn’t see  any attempt to explain what was meant by Jewishness. There were no references to the Jewishness of the Jewish State. The demography of the Ziocon club wasn’t mentioned in the booklet either.  What the JFREJ offers instead is the usual  lame  solidarity Hasbara — a desperate attempt to conceal the embarrassing fact that Israel defines itself as the Jewish State and is supported by a vast majority of Jewish institutions.

In his article, Pessah, an Israeli Jew who dwells on Palestinian land, attempts to impose boundaries on the Palestinian solidarity movement. It is no secret that Jewish activists feel threatened by the Palestinian Right of Return. In fact, the entire Jewish solidarity project can be seen as an attempt to weaken the Right of Return by diluting its content with as many misleading slogans as possible; For example: ‘End of Occupation, ‘Colonialism,’ ‘settler colonialism,’ ‘Apartheid’ etc. These terms are designed to divert the solidarity movement from the essential Palestinian cause and, in practice, to provide Israel with the right to exist.

To read more about The Jewish Solidarity Spin.

Pessah admits that he was initially concerned by the Palestinian Right of Return. But his anxiety was allayed when some “non-Arab pro Palestinians” explained to him that “Palestinians returning to their homeland didn’t have to mean expelling the current Jewish inhabitants. From then on, I started to make the right of return a central part of my advocacy work.”

And so, once again, we see that Pessah’s ‘solidarity’ is primarily concerned with Jews. It was only when he understood that Israelis would not be affected by the Right of Return that Pessah decided to integrate the slogan into his pro Palestinian phrase-book.

An Israeli Jew is now an authority on the true meaning of the Right of Return? It makes me wonder if Pessah has confirmed that the Palestinians have now given up on their villages, cities, orchards and fields? If this is the case, then please, set up a meeting immediately with Pessah, 972’s editorial staff and Bibi Netanyahu, seal a peace deal and once and for all put this Israeli/Palestinian conflict behind us.

But then, what is the meaning of the powerful Palestinian chant, “From the River to the Sea, Palestine Will Be Free?”  Pessah offers an interpretation. “We meant freedom for everyone.” Apparently the Zionists didn’t buy his nonsense. So Pessah and his ‘solidarity’ group have “promised to stop using this chant.”

Pessah writes, “We had gone out of our way to be sensitive, taking the claim of Jewish safety seriously, while ignoring the politics these (Jewish)  lobby groups were trained to promote.” Precious, isn’t it? The followers of my work know that I contend that the result of Jewish domination within some segments of the Palestinian solidarity movement can be described in very clear terms: The discourse of the oppressed is defined by the sensitivities of the oppressor. Pessah has been stupid enough to bring this devlopment to light.

“When one of our allies confused the terms ‘Jews’ and ’Zionists,’ I wrote a long letter to my colleagues about the differences between the two.” We do not need Pessah  or Ali Abunimah to tell us that Zionism and Judaism aren’t identical. Leibnitz has provided us with the relevant theory. The problem is that we cannot determine where Zionism ends and Jewishness starts. Similarly, it is impossible to determine where Pessah and the AZZs end and Netanyahu begins. All of them care primarily about Jews and their interests, they may disagree on the details.

Pessah proudly informs his 972 Jewish followers how he helped to silence a Muslim preacher, Abdul Malik Ali,  because he had claimed that  (a) “Zionist Jews” were behind a series of violent incidents that were blamed on Muslims, including 9/11, and that (b) these same Jews owned the media. “Since then,” Pessah writes,  “Abdul Malik Ali has never been invited back to speak, and we were taken seriously after demonstrating that we did not conflate anti-Semitism with opposition to Israel’s policies.”

The generally admired Alison Weir is also an “enemy” as far as Pessah is concerned.  Pessah apparently  takes pride in her expulsion from the Leading BDS coalition.

As usual, yours truly is the ultimate enemy. This time I am accused of being “a Holocaust denier and an active proponent of Nazism.”  I guess it really gets under these tribals’ skin that I insist that we stop treating the holocaust as a religion and instead elevate it to an historical chapter subject to the usual open scrutiny. Pessah boasts about the call made in 2012 for my disavowal. As Pessah and others surely know, this call had zero impact on my work or my career. If anything, it confirmed to many much that I have to say about Jewishness, choseness and the duplicity inherent in the AZZ camp. I have never worked closely with any Jewish groups or solidarity bodies dominated by tribal interests. I am a writer. I wrote The Wandering Who, which is, without a doubt the best selling book on Jewish ID politics. The book digs into the corrosive work of Jewish solidarity groups. It explains the tribal ideology that drives Pessah, Mondoweiss JVP, 972 and future Judeo-centric bodies to come.

If Pessah weren’t offended by my work and did not try to discredit me, I  would take it as an insult and consider early retirement.