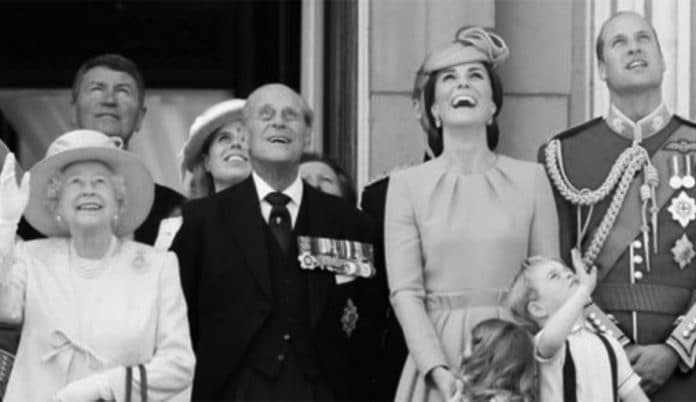 Kensington Palace has announced in a tweet that “the Duke of Cambridge will visit Israel, Jordan and the Occupied Palestinian territories in the summer.”

The visit “is at the request of Her Majesty’s Government.”

The Jerusalem Post reports that the Israeli prime minister Benjamin Netanyahu immediately welcomed the news, saying: “It is a historic visit, the first of its kind, and he will be received here with great enthusiasm.” And President Reuven Rivlin wrote on his Twitter account that Prince William will be “a very special guest” and his visit will be “a very special present for our 70th year of independence.”

Royals are supposed to remain aloof from politics, at home and abroad. The Monarch, for good reason, has avoided any state visit to Israel since the entity established itself in treacherous circumstances back in 1948.

Recruiting Prince William to shmooze the Zionists follows the warm welcome extended to Netanyahu by Theresa May to the infamous Balfour Declaration celebrations in London last November and her earlier speech oozing adoration for Israel. In that speech she attacked the successful BDS campaign calling it unacceptable and warning that her government would “have no truck with those who subscribe to it”.  The Israel lobby meanwhile has agitated furiously for the UK to shut down BDS.

Mrs May was ticked off for her hostility to BDS by 200 legal scholars and practising lawyers from all over Europe who pointed out to her that BDS is a lawful exercise of freedom of expression and outlawing it undermines a basic human right protected by international convention. Any efforts to repress BDS amount to support for Israel’s violations of international law and a failure to honour the solemn pledge by States to ‘strictly respect the aims and principles of the Charter of the United Nations’.

So why is she so stiff-necked about it? After all, Netanyahu is on many a wanted list for crimes against humanity and should, in a sane world, be locked up. What’s more, he is under investigation for corruption in his own country. Israel, as everyone knows, is in flagrant breach of umpteen UN resolutions of the sort that would have brought crippling sanctions down on any other offender.

The international community’s failure to act has left civil society no option but to fill the vacuum with BDS.

All the same Mrs May and the Israel lobby are pressing ahead with their anti-BDS programme and it looks like they’re getting special help from the Royal Family. But if Prince William seeks to undo the efforts of civil society he sets himself against the people.

According to May’s Middle East minister Alistair Burt, the official reason for the royal trip is that it’s “an important and unique opportunity to promote diplomatic and cultural ties in the region”, which is shorthand for enriching big business post-Brexit. So that’s OK then. Don’t let the misery of decades-long military occupation get in the way of new riches, eh?

Kensington Palace’s tweet received this reply from a certain Suzanne Levy, who describes herself as a full-time ‘kook’: “Fantastic news, but please correct your erroneous terminology. The Palestinian Territories are not occupied by Israel – they are under the rule of Hamas and the PA.” As if jumping to her kooky instruction the British embassy in Israel released a Hebrew-language version of the Kensington Palace announcement omitting the words “occupied territories” and replacing them with “Israel and the Palestinian Authority”.

In denying the Israeli occupation Ms Levy, like other hasbara trolls, is at odds with the United Nations, international law, world opinion and documented history. Even the UK Government officially refers to Palestine as the OPT (Occupied Palestinian Territories), so the edit by its own embassy is puzzling.

Unless, of course, it tells the truth and the plan is to prevent Prince William from actually experiencing the Occupied Territories by confining him to the witless ‘Palestinian Authority’. The PA has precious little legitimacy and is led by a ‘quisling tendency’ who have done next to nothing for the Palestinians. Their reward for wasting the nation’s time and wrecking its prospects is a life of comparative luxury, very different from that suffered by the unfortunate people they are supposed to serve. They can be relied upon to give the Prince a suitable skewed view of things.

Here’s acid test number 1. The Occupied Territories include Gaza. So will the Israelis and May allow Prince William to visit there, shoot the breeze with Hamas (whose political wing are not proscribed as terrorists in the UK and who struggle to run the devastated place after 10 years of vicious blockade, almost daily air strikes, repeated military ground incursions and occupation of its territorial waters and airspace by Israel) and to see for himself the true horror of the humanitarian crisis all this has caused? If the answer is no, the entire visit should be called off. But it won’t be.

Acid test number 2 is this. Prince William will likely succeed to the throne one day and become Defender of the [Christian] Faith, a 500 year old obligation. As a true Christian – if that is what he is – he’ll know all about the cry for help issued only months ago by the National Coalition of Christian Organizations in Palestine to the World Council of Churches and the entire ecumenical movement. It was signed by over 30 organisations in Jerusalem, the West Bank and Gaza.

They say: “We are still suffering from 100 years of injustice and oppression that were inflicted on the Palestinian people beginning with the unlawful Balfour declaration…. A hundred years later and there is still no justice! Discrimination and inequality, military occupation and systematic oppression are the rule…. Despite all the promises, endless summits, UN resolutions, religious and lay leader’s callings – Palestinians are still yearning for their freedom and independence, and seeking justice and equality.”

William must be allowed to hear direct the serious concerns of the Christian and Muslim communities and take a robust line that involves consequences for the occupier if those concerns are not properly dealt with.

Prince William’s wife Kate (Duchess of Cambridge) is expecting their third child towards the end of April so he’ll probably make the trip without her. But expect the visit to be accompanied by waves of media rapture over the new arrival, with Israel’s propaganda machine working flat-out to milk maximum PR benefits and subliminally stamp the Royal seal of approval on their apartheid regime.

If Prince William does set foot in the Holy Land his mission must obviously be very different to the one described by Alistair Burt or wished for by Netanyahu and May. If he is seen to lend legitimacy to a grasping, racist enterprise like the Israel Project, which shows no respect for human rights or international law, it will surely come to haunt him.