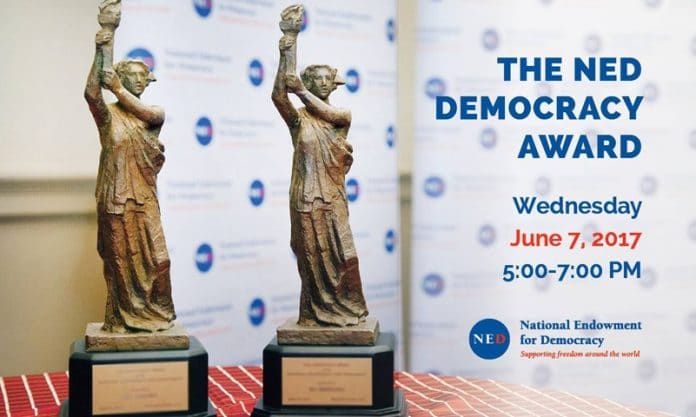 [ Editor’s Note: Well I am shocked to finally find something that Trump and I agree on, albeit probably for different reasons.

Anybody in Washington that does not know that the National Endowment for Democracy is an old pork barrel CIA support group front, for “interfering in the internal affairs of other nations”, things like elections, is the nearest thing to being in a comma.

Sure, it has some warm and fuzzy programs, all part of the cover, but incidentally providing recruitment opportunities to train subversives in targeted countries. So what that some of the countries are not models of humanity.

If you  compare them with the swath of death and destruction that we have left in our wake after 9-11, and even before or course, during the no rules Cold War, who can claim to be lily white and beyond reproach like the NED does?

The real screams will be coming for all the nice cushy patronage jobs that will be lost.  Those with good political connections get cycled through places like this to polish up their resumes for doing some infiltrating themselves.

Watch how Congress opposes this, both Dems and Repubs, as both do love their sacred cow pork barrels. But keep an eye on Trump, per the mention below that the work would be put out for public contract at State, which could be a new division of the ex-Blackwater hoodlums to hoover up all of that pork money.

The State Department by the way has a HUGE intelligence operation capacity, one that gets little public coverage. And it does have a reputation of being able to do excellent work on a good day.

The jobs are highly sought after, pay very well, great benefits, travel, and State gets the pick of the litter. Gordon can follow up with on in this. He saw all of it, starting with presidential security work in the early days… Jim W. Dean ]

The foreign policy establishment in Washington is crying foul after the Trump administration proposed to cut funding for organizations responsible for “promoting democracy abroad,” often in the guise of color revolutions.

The 2019 State Department budget request cuts the National Endowment for Democracy (NED) budget and separates it from the National Democratic Institute (NDI) and the International Republican Institute (IRI).

Funding for the institutes would be moved to the State Department, where NDI and IRI would have to compete with private contractors, according to the Washington Post columnist Josh Rogin, who described the proposal as “an assault not only on their organizations but also on the pro-democracy mission they are dedicated to.”

“If implemented, the proposal would gut the program, force crippling layoffs and the symbolic meaning would also be shattering, sending a signal far and wide that the United States is turning its back on supporting brave people who share our values,” NED President Carl Gershman told Rogin.

“The work our government does to promote democratic values abroad is at the heart of who we are as a country,” Senator John McCain (R-Arizona), chairman of the IRI’s board of directors, told Rogin. The NDI board is chaired by former Secretary of State Madeleine Albright.

McCain actually wrote a letter protesting the proposal to the Office of Management and Budget in December. It was signed by four other senators, including McCain’s close ally Lindsey Graham (R-South Carolina) and Marco Rubio (R-Florida).

His article quickly made the rounds of the Washington establishment circles, where it received praise from former CIA agent and failed presidential candidate Evan McMullin and New Republic columnist Jeet Heer. Nicholas Burns, who served as State Department spokesman under Albright, said the revelations will “make your blood boil.”

The NED was founded in 1983, under the Reagan administration. It is theoretically a non-governmental organization, though the bulk of its funding is provided by the US government and American taxpayers. The status has given NED and its institutes plausible deniability against accusations that the US has been meddling in the politics of other countries.

“A lot of what we do today was done covertly 25 years ago by the CIA,” one of the endowment’s founders, Allen Weinstein, told the Washington Post in September 1991.

One example is the wave of “color revolutions,”starting from Serbia in 2000 to the “Arab Spring”revolts of 2011. Ukraine was subjected to this twice, in 2004 and in 2014. During the unrest in Kiev in November 2004, The Guardian’s Ian Traynor described the process, while heaping praise on the people behind it.

“The operation – engineering democracy through the ballot box and civil disobedience – is now so slick that the methods have matured into a template for winning other people’s elections,” Traynor wrote.

“The Democratic party’s National Democratic Institute, the Republican party’s International Republican Institute, the US state department and USAid are the main agencies involved in these grassroots campaigns as well as the Freedom House NGO and billionaire George Soros’s open society institute.”

Though campaigns funded by all these external actors are more astroturf than grassroots, there were few objections, as it was all in the name of democracy.

Traynor concluded his 2004 story by saying the “places to watch” were Moldova and Central Asia. Sure enough, the former Soviet republic of Kyrgyzstan went through a “Pink revolution” in February 2005, while the “Grape revolution” took place in Moldova in April 2009.

The Washington establishment’s obsession with democracy may also be explained by the belief that any non-democratic government is automatically anti-Western, as Luis Fleischman of the neoconservative Center for Security Policy argued last month.

If the regime is pro-American, however, it doesn’t matter whether it’s actually democratic or not. On Tuesday, the director of the Foundation for Defense of Democracies Mark Dubowitz tweeted that “inclusive authoritarianism” might be a better fit for Middle Eastern countries, as long as they were “tolerant, respectful of individual liberties & minority rights & pro-American.”