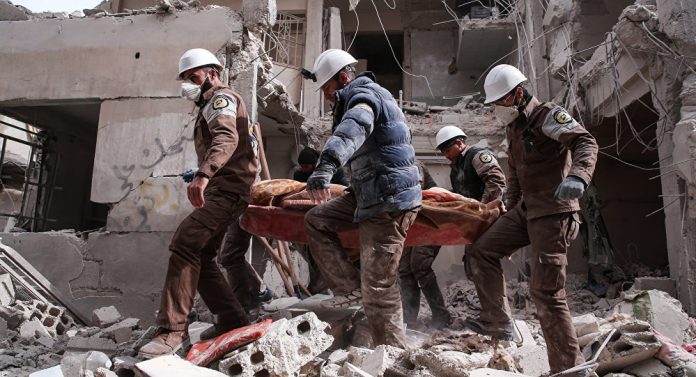 [ Editor’s Note: The White Helmets have their atrocity film crews well-tuned now, but what they have failed to grasp is you can’t keep going to the same well over and over, as you burn up your credibility.

Because Western media has published all of its claims, this has encouraged the White Helmets to keep making their films.

The shame on Western press is that when Aleppo fell it stopped reporting when the citizens began telling the real story of what it was like to live under the boot of the terrorists. The unreported stories shredded the Fake News narrative, which is why their correspondents took off. They feared for their safety in Aleppo.

While the media cowards may think that what really happened has been swept under the carpet, the lies they told to the world are carved into the hearts of the people there.

They know the names of all the correspondents and have archived what they wrote, knowing that some day there would be a day of reckoning. Once a political settlement is completed, I hope to see some aiding and abetting charges filed on the Western reporters most deserving of them.

A message needs to be sent to those in the field now that they do not have sovereign state immunity. Sure, I know they may never go back to Syria, but it’s the principle that counts. Examples need to be set about media terrorists to dissuade others… Jim W. Dean ]

Pictures allegedly showing the White Helmets’ filmmaking studio in Syria’s Eastern Ghouta have appeared on social media, prompting numerous news agencies to assume that the group is producing another “documentary” movie about the “atrocities” of the Syrian government.

Syrian activist Penelope Stafyla posted the footage to her Facebook profile to show the “media industry” and the “Hollywood production” of the White Helmets; the images featured fake human limbs, theatrical grease-paint, a plastic bottle with some substance that looked like blood, etc.

Stafyla suggested that the group was shooting another film to demonize President Bashar al-Assad as well as to accuse the Syrian government of using chemical weapons against civilians.

The pictures also show an assistant director holding a clapperboard standing in front of a woman carrying a child who has allegedly been affected by the chemical gas attack and was powdered to look like a bomb victim.

Reacting to the pictures posted by Stafyla, one Facebook user said that the images were not actually from the brand-new movie by the White Helmets, but were part of a film about the “fake revolution” in Syria, called “Revolution man,” directed by Najdat Aznour and released on February 22.

Another Facebook user commented a host of pictures, imagining what it would be like if US President Donald Trump saw those images, or what his daughter Ivanka’s reaction would be to them, referring to the US attack on the military base in Syria on April 7, 2017, when Ivanka was the one who showed photos of babies allegedly affected by sarin gas used by Bashar Assad, thus triggering President Trump to launch 59 Tomahawk missiles against Syria.

Another Facebook user commented a host of pictures, imagining what it would be like if US President Donald Trump saw those images, or what his daughter Ivanka’s reaction would be to them, referring to the US attack on the military base in Syria on April 7, 2017, when Ivanka was the one who showed photos of babies allegedly affected by sarin gas used by Bashar Assad, thus triggering President Trump to launch 59 Tomahawk missiles against Syria.

On February 25, volunteers from the White Helmets reported that the Syrian government had used chlorine gas against the town of Al-Shifoniya in Eastern Ghouta, which led to the death of a child and “widespread suffocation” among the locals.

What seems interesting is that weeks prior to the report, the Russian center for Syrian reconciliation received information from a local resident that Tahrir al-Sham (formerly known as Nusra Front) terrorists, along with the White Helmets, were preparing to stage a provocation, involving the use of chemical weapons in Eastern Ghouta in order to accuse the government of killing civilians.

This warning was, however, ignored by the mainstream media and the US-led international coalition, who prefer to rely on unverified and, in particular, fake sources.

As for numerous staged clips showing the group’s daily rescue operations, one of the mainstream media outlets today posted an “astonishing” video filmed in the Eastern Ghouta enclave. While the footage shows the volunteers “heroically” saving the live of a baby, retrieving it from the debris, it was not verified and raises many questions if one looks at it more attentively.