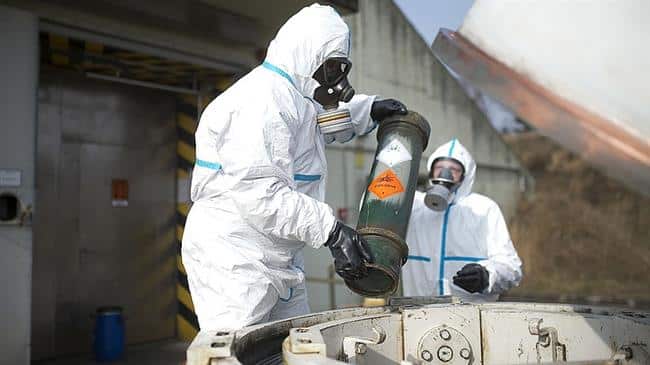 [ Editor’s note: US Coalition supported terrorists are caught red handed with chemical weapons. VT’s sources confirm that virtually all such attacks were the usual US false flag overused tactic because corporate media was always ready and willing to broadcast any and all such claims with their megaphone.

We have seen some evidence where Jihadis used chlorine on the SAA, and it used some back on them. But these were combat military targets between small units.

As to what Assad’s motive would be use chemical weapons on general civilian targets with absolutely no military reason to do so, was a subject media never addressed was it did not fit is their selected version of events.

We should push now for there to be a real independent investigation on US Coalition complicity in the false flag gas attacks in Syria as war crimes … Jim W. Dean ]

The militants holed up in Eastern Ghouta have been raining rockets on the Syrian capital, killing and injuring many civilians over the past weeks.

Most recently, the official Syrian Arab News Agency said terrorists based in the area had attacked the capital’s al-Kabbas neighborhood with rockets, killing two civilians.

On Sunday, though, US Defense Secretary James Mattis repeated Washington and its allies’ allegations against the Syrian government, warning that it would be “very unwise” for it to use chemical weapons in Eastern Ghouta and elsewhere.

Syria surrendered its chemical stockpiles in 2014 under the supervision of the UN and the Organization for the Prohibition of Chemical Weapons. The discovery of the workshop is yet another revelation in a prolonged debate on who used chemical weapons in Syria.

Back in 2012, a video was released showing the terrorists testing a chemical substance on lab rabbits and threatening to use it against pro-government Syrians.

Russia, which is helping Damascus curb foreign-backed militancy in the Arab country, has designated four safe passage routes in Eastern Ghouta after a ceasefire was declared across Syria by the UN Security Council.

The militants in Eastern Ghouta are, however, blocking civilians from leaving the region, using them as human shields in the face of army advances. Late on Sunday, the Russian military said it had managed to evacuate 52 civilians, including 26 children, from Eastern Ghouta after talks with local authorities.

The civilians, inhabitants of the town of Misraba, were taken to a temporary refugee camp, where they were receiving medical aid, the military said in a statement.

Syrian TV also said another group of civilians had left Eastern Ghouta through a corridor established by the Syrian army.

It broadcast footage showing a group of men, women and children who left the town of Madyara on Monday. The town was captured by Syrian troops on Sunday.