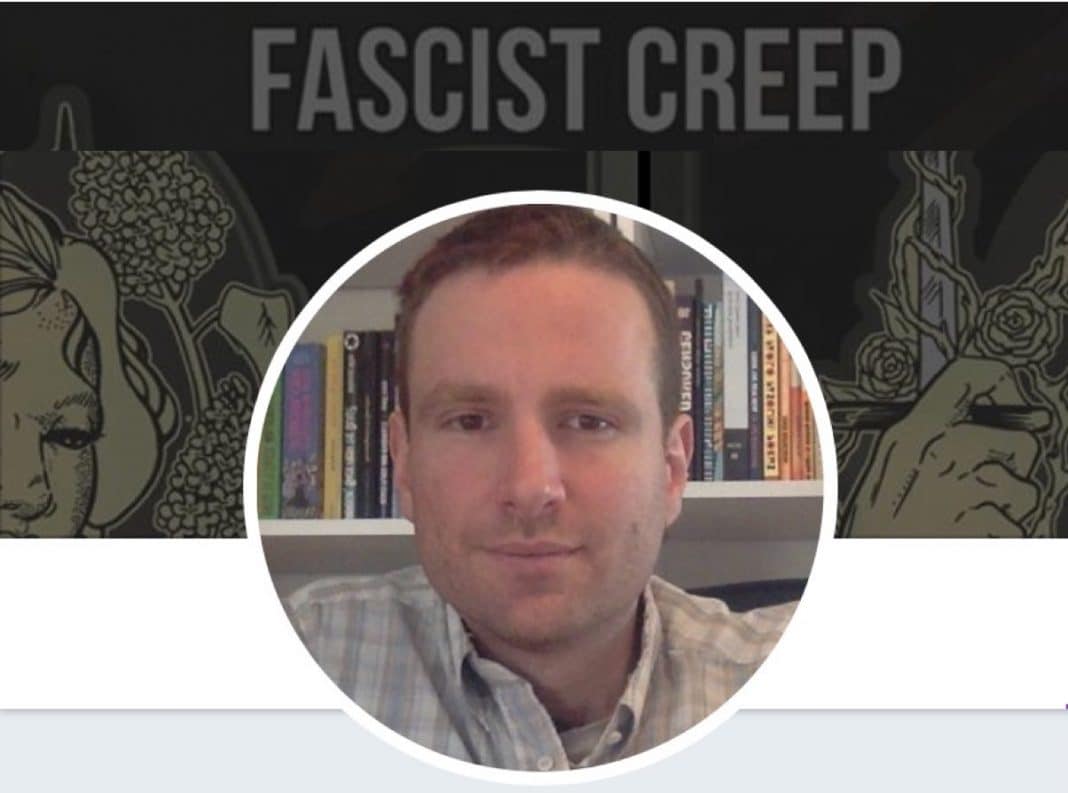 A challenge to Alexander Reid Ross (pictured above), the self-styled Antifa leader who led a lynch mob that terrorized KBOO Radio into canceling my appearance on John Shuck’s “Beloved Community” radio show last Friday: Alex, if you are really opposed to fascism, why are you using fear-mongering, witch-hunting, and ad hominem insults to try to crush the free speech rights of someone you disagree with? Let’s do the real anti-fascist thing: Have a free and fair debate based on logic and evidence. Let’s debate the real nature of the fascist threat in today’s USA. I say it is the neocon-Zionists and their Antifa allies. What say you?

What is the essence of fascism?

Wikipedia calls it “radical authoritarian nationalism, characterized by dictatorial power, forcible suppression of opposition and control of industry and commerce.”

Dictionary.com calls it “a governmental system led by a dictator having complete power, forcibly suppressing opposition and criticism.”

Authoritarianism. Dictatorship. Fascism. Such terms describe a spirit that seeks to prevent debate—censoring opposing voices rather than countering them with facts and logic.

Historically, fascist movements consisted of hysterical mobs and their self-styled leaders overthrowing parliamentary democracy (the ultimate forum for free debate) and crushing all dissent. The philosopher-king of fascism was Carl Schmitt, who pointed out how witch-hunting and scapegoating could be used to incite hysteria, overthrow parliamentary democracy and the free speech associated with it, and install a dictatorship where only one opinion was allowed. And the best way to launch the witch-hunting hysteria, he knew, was to stage a false flag operation (i.e. the Reichstag Fire) that would whip up popular hatred against a scapegoated other, enabling a permanent state of emergency.

Today, by far the biggest and most dangerous fascist movement on earth is Zionism, which staged the 9/11 Reichstag Fire to scapegoat Muslims and create a permanent state of emergency. We currently live under Zionist fascism, not Constitutional democracy.  American democracy ended on September 10th, 2001.

One of Zionism’s most openly, undisguisedly fascist subsidiaries is Antifa. These self-styled “anti-fascists” have a whole lot in common with the brownshirts they pretend to despise, starting with their refusal to countenance free and reasoned debate. For Antifa, only one opinion is allowed—theirs. Anyone who disagrees with them is an f-word, an “anti-Semite,” a “conspiracy theorist,” an unperson. And anyone who points out that we are already living under Zionist fascism, thanks to the 9/11 Reichstag Fire, will be the first one they will try to silence.

Despite all the hype about racist, nationalist, neo-Nazi Trump supporters, I rarely hear about THEM shutting down anyone’s free speech. On the contrary, it seems to be Zionist groups like B’nai Brith, SPLC, and Political Research Associates, and their pet Antifa rabble that are doing almost all of the fascist, authoritarian censorship-by-mob operations in today’s USA. The Zionist groups verbally terrorize people, ruin their careers, launch witch hunts, and generally do everything they can to shut down free speech on “sensitive” topics; while Antifa takes it to the next level by threatening or deploying mob violence against dissenters.

Since 9/11, no real debate or opposition has been allowed in mainstream media, academia, or government.  Now even the internet, and community radio stations like KBOO, are being purged of real dissent.

I appeal to those who genuinely oppose fascism: Please contact KBOO and ask them to apologize for canceling my appearance, and to schedule airtime during which I can debate Alexander Reid Ross or, if he chickens out, another Antifa opponent.