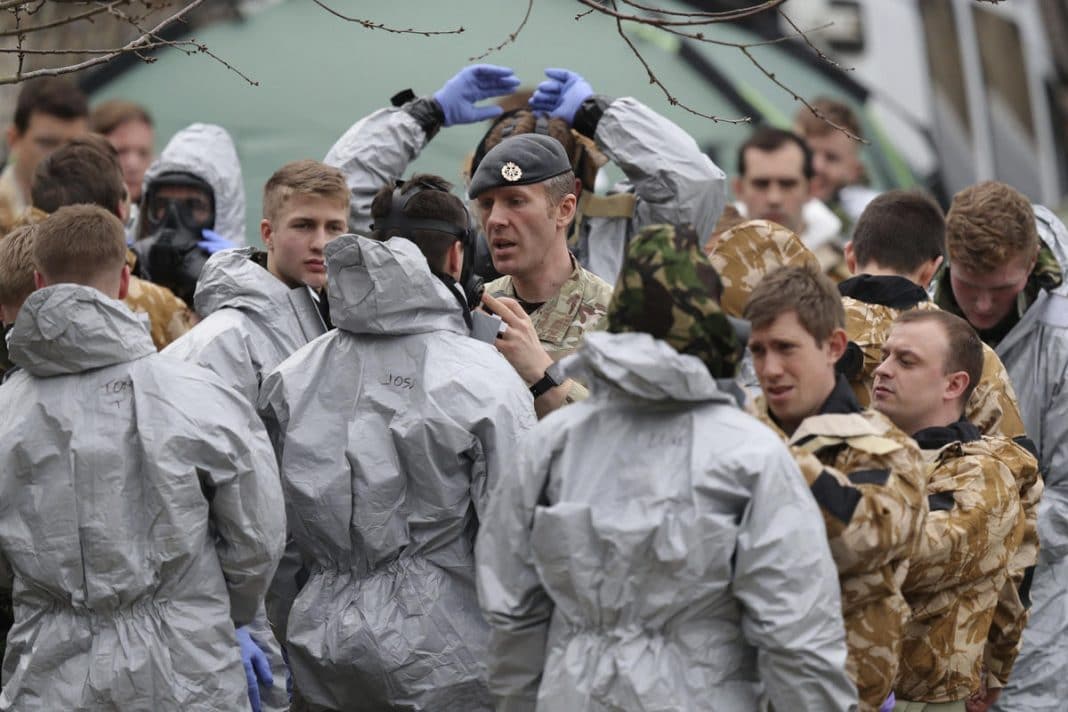 [ Editor’s Note: RT is finally hitting its stride on the nerve agent poisoning, albeit it two days late. We were afraid this might be day number three, but its afternoon postings had some meat on their bones.

We are still mystified at VT how the Brits think anyone is going to believe their cock-and-bull story. On the contrary, we think they are pushing a hoax, based on their publicly making claims they admit not having evidence for.

They are not suffering from stupidity, but are over confident in their ability to bluff their way through it.

I had not known Craig Murray, the former British Ambassador to Uzbekistan was still on the planet. He was one of the bright lights of the sad War of Terror when he blew the story of the terror regime running Uzbekistan.

It used the US war as a smokescreen to round up all of their political  opponents as “terrorists”, to torture and kill, and then fed phony confessions to US Intel that nobody seemed very interested in knowing they were bogus. Murray at the time said 10,000 were murdered.

When Murray passed this gruesome information on to his diplomatic superiors, they were not interested. This current case is another example, as I had warned after 9-11, that if you don’t nail them, they just come back at you later, having no fear of retribution from the public.

VT’s Ian Greenhalgh has a great story up, debunking  the earlier Polonium poisoning of Russian defector Litvinenko and the usual British coverup done there.

Traces of Polonium on the plane seats Litvinenko had flown on proved he had been transporting it, obviously in a smuggling endeavor. Be sure to read Ian’s piece.

As it was worth a few million dollars, VT can assure you the Russians don’t have to spend that much to knock somebody off, even for a defector. Forgive me, but I have to say that is overkill.

The police commissioner says it is a complicated case that will take weeks for a preliminary report, and then British politicians are all pretending to have it figured out, but are keeping how they did that a secret. Gosh, might someone be lying to us? … Jim W. Dean ]

There is no proof of Russia’s guilt in the Skripal poisoning. The case recalls previous allegations of poisoning which turned out to be either unproven or false, writes John Laughland.

Congratulations to Craig Murray for getting there first. The colorful former British ambassador to Uzbekistan, turned anti-establishment dissident after he was sacked from the Foreign Office in 2004, has published on his blog some key texts by authoritative scientists which cast serious doubt on the British government’s claims about what happened to the former double agent, Sergei Skripal, and why.

Murray – and his sources – have unearthed texts from 2016, 2013 and 1995 by, respectively, a scientist at Porton Down, the secret British military chemical weapons installations which is 20 minutes from Salisbury where Skripal was found last week; a scientist at the Organisation for the Prohibition of Chemical Weapons, the statutory body created by the 1997 Convention on Chemical Weapons but which London has ignored and bypassed in its spat with Moscow; and by the Russian defector scientist, Vil Mirzayanov, who is the sole source for the claim that the Soviet Union started to manufacture so-called novichok (“newbie”) nerve agents in the 1980s, allegedly now used to poison Skripal.

Two of these texts, for which Murray does not provide links, are available online here and here. The first two show, long before anyone had heard of Sergei Skripal, that the existence of novichoks has not been confirmed.

Mirzayanov’s 1995 paper says that they could be manufactured anywhere, for instance by any laboratory which can make fertilizer or pesticide, and that the factory where they were allegedly developed by the Soviet Union is in Uzbekistan, a country which has not been under Moscow’s control since 1991 but where the Americans had a military base until 2005.

In other words, even if it is true that Skripal was poisoned by this nerve agent, novichoks are not “military grade“. There is therefore no proof that they are manufactured in Russia and no grounds for claiming, as Theresa May did on March 14 in the House of Commons, that there is “no alternative conclusion other than that the Russian state was culpable for the attempted murder of Mr Skripal and his daughter.”

On the contrary, there are plenty of alternative conclusions available at this stage. The fact that these texts date from long before the Skripal affair only increases their credibility.

We did not need Murray’s revelations, however valuable, to come to this conclusion ourselves. The day before Mrs May made her statement to the House of Commons, Neil Basu, the newly appointed assistant commissioner of the Metropolitan Police for counter-terrorism, who is in charge of the Skripal enquiry, told the press, in a formal statement, that the investigation was highly complex and that it would take a long time, probably “weeks.”

Mrs. May’s statement and that of Commissioner Basu cannot both be true: if the police investigation is still ongoing, there are no grounds even for making allegations, let alone for saying that guilt has been proved.

Mrs. May’s proclaimed lack of doubt is hardly convincing, since it was she who, as home secretary, ordered the Litvinenko enquiry to be opened, seven years after Alexander Litvinenko’s death, and then later instructed evidence given to it by the British intelligence services to be kept secret.

This enquiry, which broke the law under which it was conducted because Section 2 of the Enquiries Act of 2005 forbids such enquiries from ruling on criminal or civil liability, was in turn as convincing as the similar 2004 Hutton inquiry into the death of the scientist David Kelly. The Hutton report was widely ridiculed as an establishment stitch-up, which it was.

The author of the Litvinenko report, a former judge acting on orders from Theresa May, concluded that President Putin ordered Litvinenko’s assassination. Very similar arguments – that only the Russians could have done it because only they have these poisons – have now resurfaced about Skripal.

Moreover, the same toxicologist, the late Professor John Henry of Imperial College, London, was the source of both the theory about Litvinenko’s poisoning and also of the similar theory about Viktor Yushchenko, the Ukrainian politician who stood for president in 2004 and who developed acne during the campaign.

The theory that Yuschenko had been poisoned by his “pro-Russian” rival, Viktor Yanukovich, was widely accredited at the time, even though the clinic in Vienna, on whose premises the original claim of poisoning had been announced, formally denied, in a statement on its website, that it had authorized or approved the diagnosis.

In fact, as I learned by telephoning the medical director of the clinic which published the denial, he had received death threats for questioning Yushchenko’s story.  In five years as president of Ukraine, moreover, with the whole apparatus of the state at his disposal, Yushchenko was never able to find anyone responsible for what happened to him and the affair has now been closed for years.

The whole thing, to put it bluntly, was a load of rubbish. There are no known cases of fatal poisoning by dioxin in the history of medicine, and the Dutch toxicologist who claimed to have found dioxin in Yushchenko’s blood – as I also found out when I rang him too – was in reality a food scientist who admitted to me that he had no way of knowing how it had got there.

He added that the dose was so small that it would hardly have killed a rat, let alone a human being. Yet this ridiculous theory was widely believed to be true, including by professors of medicine, and it served its purpose in getting Yushchenko elected.

So there is a history of such poisoning allegations going back a decade and a half. Such accusations tap into some very deep psychology indeed: Russia plays in these allegations the role attributed to Jews in the Middle Ages, who were regularly accused of poisoning wells or of bearing the plague.

Each of our modern witch-hunts feeds off the previous one and the theory snowballs over time. The unproved allegations of yesterday become the elements of proof for today. Those of us who cried foul back in 2004 may well be proved right about Sergei Skripal – but by that time everyone will have forgotten him and moved on to something else.

John Laughland is a historian and political scientist who has been Director of Studies at the Institute of Democracy and Cooperation in Paris since 2008. He is the author of several books, the most recent of which is ‘A History of Political trials from Charles I to Charles Taylor’.