Stephen Hawking, who has just passed away, was unquestionably a mathematical genius.[1] He and Roger Penrose put the age-old question to rest when they the declare that all the evidence has shown us that the universe began to exist.[2] Other cosmologists such as Alex Vilenkin came to the same conclusion.[3]

But like Isaac Newton before him, Hawking used his position as one of the leading figures in mathematical physics to smuggle in incoherent ideas on the universe itself. E. Michael Jones has meticulously documented that Newton used the inverse square law (which by the way is true) to unleash incoherent ideas onto the universe.[4] Hawking was indirectly following the footsteps of his antecedent.

Hawking posited the claim that “Because there is a law of gravity, the universe can and will create itself out of nothing.”[5] With all due respect to Hawking, this is logically incoherent and therefore worthless. As Oxford mathematician and philosopher of science John C. Lennox notes in his critique of Hawking’s view,

“This is obviously self-contradictory and thus logically incoherent—even if we put X equal to the universe! To presuppose the existence of the universe to account for its own existence sounds like something out of Alice in Wonderland, not science.”[6]

But because Hawking was trying to escape the conclusion that a “super-intellect has monkeyed with physics,” to borrow Sir Fred Hoyle’s phraseology,[7] Hawking had to believe the unbelievable. This was one reason why he was also advocating the multi-verse theory.

Hawking and his coauthor Leonard Mlodinow declared in The Grand Design that M-theory “predicts that a great many universes were created out of nothing. Their creation does not require the intervention of some supernatural being or god.”[8]

Where did these multiverses come from? Hawking and Mlodinow tell us that they “arise naturally from physical law. They are a prediction of science.”[9] Hawking and Mlodinow are locked into this circular reasoning because they obviously did not want to consider the “super-intellect” that Hoyle talked about. 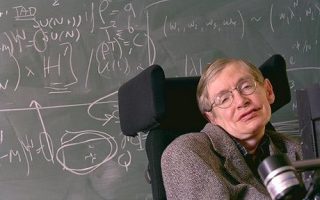 Hawking and Mlodinow could not see that adding an unlimited number of parallel universes will not and can never answer the question of how our universe was created. These arguments are merely smokescreens to deflect attention away from the inherent deficiencies of the “universe create itself” hypothesis.

It was one thing for Hawking and Mlodinow to confidently posit these assertions as axiomatic, but it was quite another to provide scientific foundations for them. If multiple universes arise naturally from the physical law, where did the physical law come from in the first place? If multiple universes are a prediction of science, then science must be able to give us at least some scientific explanation for this. Again John Lennox addresses the underlying flaws of this theory:

“Physical laws cannot create anything. They are a description of what normally happens under certain given conditions…The sun rises in the east every day, but this law does not create the sun; nor the planet earth, with east and west. The law is descriptive and predictive, but it is not creative. Similarly Newton’s law of gravitation does not create gravity or the matter on which gravity acts.”[10]

Because there is no scientific or rational backbone supporting Hawking’s multiverse theory, fellow intellectuals such as Paul Davies and Richard Swinburne completely reject it. Swinburne states, “It’s crazy to postulate a trillion (causally unconnected) universes to explain the features of one universe, when postulating one entity will do the job.”[11]

Physicist Steven Weinberg lamented that multiple universes “are very speculative…without any experimental support” and physicist Lee Smolin called it “a fantasy,” even though he promoted it in his book. Roger Penrose, who is far from thrilled with Hawking’s new book, declares in his response to The Grand Design that “M-theory enjoys no observational support whatsoever.”[12]

Physicist Peter Woit of Columbia University was also disappointed at The Grand Design’s heavy reliance on M-theory, which he sees as sheer speculation.[13]

Because Hawking and Mlodinow jumped on the multiverse idea without first pulling together scientific backing, John Horgan of Scientific American denounces Hawking’s “‘new’ theory” as “the same old crap.”[14] The lack of scientific evidence for M-theory has also been dismissed by physicists such as Frank Close, Jon Butterworth, and Jim Al-Khalili.[15]

Speculation about multiple universes aside, there are basic yet profound questions—such as why human beings matter, why there is a universe after all, and why the laws of the universe seem to correspond to the rational human mind—that science cannot explain. Nobelist Sir Peter Medawar called this the limit of science.[16]

Leaving all this aside, I agree with Hawking that “Speech has allowed the communication of ideas, enabling human beings to work together to build the impossible. Mankind’s greatest achievements have come about by talking, and its greatest failures by not talking.”

Both speech and language, as E. Michael Jones has recently pointed out in his review of Yuval Noah Harari’s Sapiens: A Brief History of Humankind,

“are subsumed under the Greek word Logos. Speech, it turns out, is the main characteristic that distinguishes man from animals. The ancient Greeks understood that man was different from all other animals because of the fact that he could speak. The word they used for rationality was “logos,” which is also the word for speech, discourse, language, and other related concepts.

“Logos is “the word or that by which the inward thought is expressed”; it is equivalent to the Latin words “ratio,” “vox,” and “oratio,” or “that which is said or spoken.” It is frequently translated as “word,” “language,” or “talk,” as in a saying or statement, or maxim, or maxim or resolution. It can also be translated as speech, discourse or conversation as well as the power to speak. From these more basic ideas flows the idea of rationality itself.

“Logos means both thought and reason. When Democritus says that something is “kata logon,” he means that it is “agreeable to reason.” Logos becomes, therefore, the distinguishing feature of a human being. “En Andros logo einai” means “to be reckoned as a man.” “Ho Logos” comprises both the sense of thought and word when it is used in the New Testament.

“After meditating on the by then thousand-year-old concept of logos, the medieval scholastic successors to the Greek philosophers coined the term “rational animal” (animale rationale) as the essential definition of man. Unlike angels, man had a body similar to the bodies of other animals. His distinguishing characteristic, however, was the fact that he could speak and reason, terms subsumed under the Greek term logos.”[17]

In short, language and speech inexorably show that logos is at work in the universe. This also shows that the universe is comprehensible and meaningful. The universe is not meaningless, as Steven Weinberg and others have propounded. If it is meaningful, then perhaps we need to find out its metaphysical meaning and purpose.