[ Editor’s Note: The dust has settled a bit on the Tillerson firing. The consensus is that Trump felt overshadowed by Tillerson, who had a wealth of foreign wheeling-and-dealing experience over Trump.

Tillerson also was competitive with Trump when it came to microphone commenting, where Trump prefers the public to hear only one opinion, which is his. Trump brought Tillerson in as cover for his lack of international business experience, since Donald’s prior interest in international affairs had supposedly been hookers.

When it came time to hands-on dealing with North Korea, Trump wanted to run the show like a reality TV show, where he is the star…and no one else. But there is another reason not mentioned in the press, and that is Trump’s inferiority complex, knowing what he really is, and is not.

He is savvy enough to know that new people in a top slot want to bend over backwards to make a good impression and please the boss, so the last thing they are going to do is disagree with him. They will be “yes” men…to start.

But once they get their feet on the ground and see some of the craziness going on, they start to get more independent, and that Trump does not want. With musical chairs constantly going on with the staff, Trump feels more secure.

It keeps everyone off balance, with fear of a misstep always simmering in the background. Whether that is better for the country, I don’t think the man really cares. He’s been a hustler all of his life.

There is a downside to letting Tillerson go, like if he writes a book and does so quickly. A man of his business stature could slice Trump to ribbons like no one else. Remember that Tillerson never publicly denied that he made the “moron” comment, which of course was true.

In an Exxon boardroom environment, Trump would have been shining shoes. Trump knows that, and it’s why he has the classic inferiority complex around people who are not faking it … Jim W. Dean ] 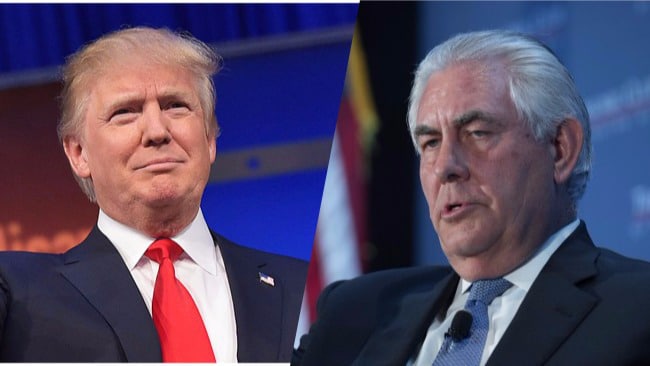 US President Donald Trump has fired Secretary of State Rex Tillerson after a series of public rifts over issues including Iran, Russia and North Korea, replacing his top diplomat with CIA Director and former congressman Mike Pompeo.