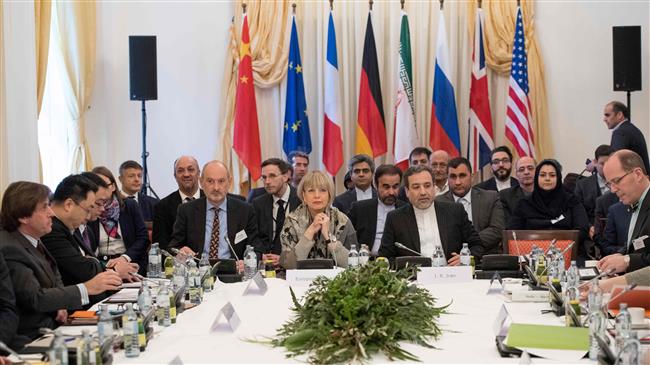 [ Editor’s Note: The EU is still holding tight ranks against Trump’s attempts to kill the Iran agreement. The US is already in violation, as it has refused to remove all sanctions to doing business with Iran, when that had been agreed to.

Iran is not about to let a foreign body have veto power over its military defense, including missiles. “Mutually assured destruction” is their only defense against a preemptive attack, which by the way, both the US and Israel hold themselves free to do at their pleasure.

The JCPOA was a nuclear weapons deal, and the exclusion of missiles was carefully written into the deal, as the other parties knew Iran would never agree to that. The JCPOA’s main focus was pulling the uranium stockpiles down, and having more inspections to lower tensions by knowing that Iran neither had nuclear weapons nor was working them.

And do not forget that Iran did not demand that Israel and Saudi Arabia be brought under the same restrictions at this time. The ten-year length of the agreement left time for de-nuclearizing the Mideast to begin a few years prior to the JCPOA running out.

Nuclear warheads were the focus, so the missiles had nothing to do with that, as Iran would have no nukes to put on them. There have been no claims that Iran has or is working on such.

And the last been thing, which Iran has pointed out: If someone wanted to really renegotiate the deal, something would have to be given back to Iran, to swap for the new stuff the US wants, which the US has no intention of doing.

Agreeing to that would make fools of Iran, so they would be better off with a broken deal so they could nuke up, and then everybody could look to Trump as the cause of that. As to a major strike on Iran, no US politician could survive that.

US and Gulf State military and oil infrastructure would go down with Iran’s. Their economies would collapse, massive loan defaults, with a ripple effect all over the world, and where everyone getting wiped out would know who had caused it.

And that would not be Iran. I would not want to be an American living in any of those countries. Would Trump be crazy enough to do this? The answer is yes, of course.

And you can see him replacing staff with yes men now, who will do his bidding; while on the other hand, the legal noose slowly tightens around Trump’s neck, which will push him closer and closer to a war powers option to save himself.

The only salvation would be a coup to remove Trump, which would require coordination between the Republicans, Congress and the military, a tricky piece of business. But when it gets down to the lesser of two evils, a real possibility… Jim W. Dean ]

Signatories to Iran’s 2015 nuclear agreement with world powers have held a new round of their periodic meetings to review its implementation amid US threats to kill the multilateral accord.

Representatives from Iran, the US, Russia, China, France, Britain and Germany convened in the Austrian city of Vienna on Friday for a meeting of the so-called Joint Comprehensive Plan of Action Joint Commission, or JCPOA.

One European diplomat said representatives from Europe were desperate to save the JCPOA from a possible collapse, which could be the case due to policies adopted by US President Donald Trump.

“We need to make sure that we don’t throw out the baby with the bath water, so we keep the nuclear agreement and we act on the rest in parallel,” said the diplomat.

The meeting comes ahead of a May 12 deadline for US President Donald Trump to extended waivers of economic sanctions on Iran.

He vowed in January, when he last extended those waivers, not to do so again unless the Europeans meet his demands to fix what he calls “flaws” in the deal.

European Union foreign ministers are expected to affirm that they believe the deal with Iran is good, and work to discourage Trump from pulling out of the deal in May.

Ahead of the talks, a senior Iranian Foreign Ministry official has ruled out speculation that Iran could accept a side deal to the JCPOA, saying the international document is basically not re-negotiable.

Speaking to the IRNA news agency on Friday, Abbas Araqchi, who serves as the deputy foreign minister for political affairs, said renegotiating the deal, officially called the Joint Comprehensive Plan of Action (JCPOA), or similar ideas like adding an appendix to it do not basically exist in Iran’s approach to the document.

“The JCPOA is a product of long negotiations and a package of exchanges which have (already) taken place,” Araqchi said, adding that Iran has fully observed its commitments under the agreement and expects the other side of the deal to do the same.

Araqchi said, however, that the United States, as a party to the JCPOA, has adopted a subversive approach toward the JCPOA over the past 14 months.

“Frightening and threatening the world’s business and economic communities not to work with Iran constitute a clear violation of different articles of the JCPOA,” said Araqchi in reference to Washington’s policy, under Trump, toward the Iran deal.

Under the JCPOA, Iran halted some of its peaceful nuclear activities in exchange for the removal of nuclear-related international sanctions.

Many of those sanctions, including those that used to target Iran’s banking system, have been technically lifted but companies still refrain from engaging in major deals with Iran as they fear a US reprisal.

Trump has repeatedly designated the JCPOA as a deal that harms US interests and should be either cancelled or repaired.

Other parties to the nuclear agreement, namely Russia, China, Britain, Germany and France, have all criticized Trump’s views on the deal, saying the agreement is sound and has proven to be functioning.