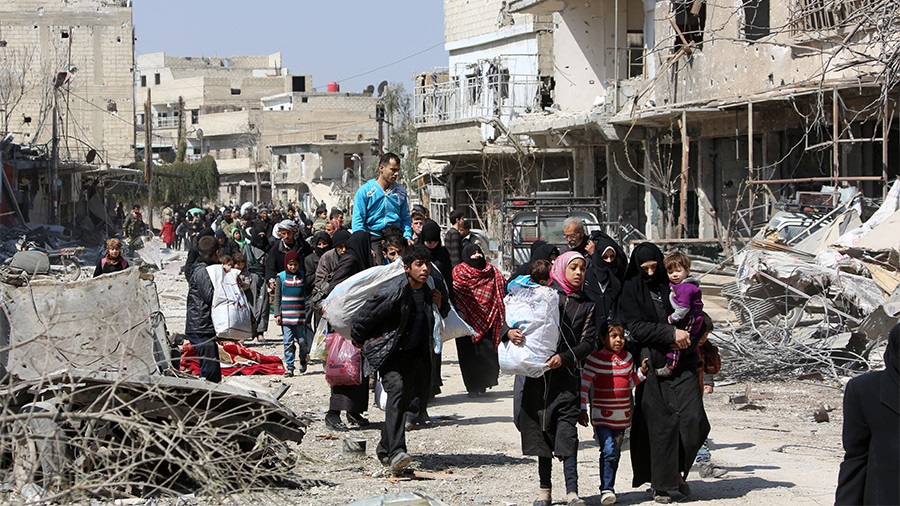 Assad to US Coalition: Let my people go!

[ Editor’s Note: Big numbers of civilian PoWs are pouring out of East Ghouta now, hence the word Exodus, not only for the symbolism of their coming out of the jihadi desert, but out of the bondage of the US-backed terrorists.

This news will tend to decrease the chances of a US attack. Just breaking is the Ghouta jihadis formally asking for a ceasefire, thus removing the US coalition excuse to attack Syria to save its terrorist brigades in Ghouta.

I just did a search to see what western media has been saying about the stories from the Ghouta civilians about their living under the jihadis, and I found nothing other than Alternative media. We call this a blackout, which includes VT of course.

What I did find is a major BBC story, professionally done with state-of-the-art infographics, in which the focus was “Assad bombing East Ghouta and its people”. I could smell the British Intel stench coming from the story.

I recommend you take a nausea pill and wade through this article as a perfect example of why Intel agencies are embedded in major national media.

A normal run of the mill, pre-conditioned Brit would believe every word of this fairy tale, and as my search shows, the chances of them even seeing our alternate version is slight.

Russia says more than 20,000 people left Eastern Ghouta on Sunday, using one of the four humanitarian corridors set up to enable safe passage out of the Syrian capital’s suburb.

The Center for Reconciliation in Syria which is run by Russia’s Defense Ministry made the announcement, saying the evacuation took place in the town of Hammouriyeh, Interfax news agency reported.

Since humanitarian corridors were set up, more than 68,000 people have left Eastern Ghouta, the center added.

Russia has set up the passageways with Syria’s help to contribute to a United Nations Security Council resolution, which came into force last month mandating a ceasefire in the Arab country.

Syria and Russia have cornered foreign-backed militants in the countryside as part of their campaign to liberate civilians holed up there and end militant attacks from the suburb on Damascus.

During their advances in the area, Syrian forces have uncovered workshops used to make chemical weapons. The Syrian military has also intercepted several arms and ammunition cargoes heading to Eastern Ghouta.

One man, who had fled the suburb to the al-Duweir camp near Damascus on Saturday, said a lot of children suffer from malnutrition because militants are stealing the aid.

On Friday, civilians fleeing through the Hush Nasri corridor described in an interview with AFP news agency how militants were preventing them from leaving the area and using them as human shields.