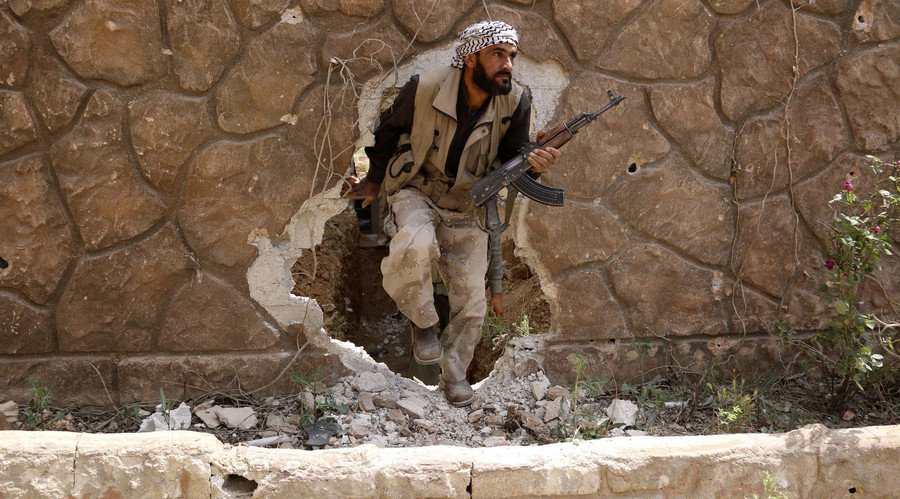 [ Editor’s Note: This could be a big break. Once fighting stops with this surrendering group the SAA can shift more forces onto the remainder. It will allow the civilians being held by this break away group to exit while not under fire.

These developments are changing the landscape for any justification that the US had planned for major airstrikes on Damascus. Assad’s coming out into the daylight to mingle with his combat troops in Ghouta was a show of confidence.

We are hearing rumbles of negotiations going one behind the scenes with the US, but no details. With Afrin falling today, due to the YPG Kurds pulling out and leaving their ammo dumps behind, that also has the US distracted.

Where did the Kurds go, and where will Turkey want to go next? It does not take a military genius to describe this as a fluid situation. But I can feel the relief of tension in Damascus, all the way here to Atlanta.

On the home front Senators Jeff Flake and Lindsey Graham told Trump via news interviews on firing Mueller, that “he can’t go there”, “we can’t in Congress accept that”. I am sure that spoiled Trump’s day. The Democrats are all smiles … Jim W. Dean ]

Militants from radical groups Faylaq al-Rahman have cut their ties with the Tahrir al-Sham terrorist organization with the aim to leave Eastern Ghouta. It is also reported about several clashes between militants of the two groups.

The decision to split was taken after a number of demonstrations in the town of Kafr Batna. According to local sources, citizens of the town who have been suffering from the war every day demanded jihadists to leave the region. Many of them believe that terrorists’ withdrawal will finally bring peace to Eastern Ghouta.

To prove their readiness the radicals in this regard have made a joint statement from Eastern Ghouta as Faylaq al-Rahman Corps, Jaysh al-Islam, and Ahrar al-Sham. They all describe themselves as members of the Free Syrian Army (FSA) and emphasize a remarkable affirmation.

The radicals confirm readiness to conduct negotiations in Geneva with the Russian side under the auspices of the United Nations, to discuss the mechanism and procedures for the implementation of Security Council resolution 2401, which demands a cease-fire.

Inside Syria Media Center publishes their release below. 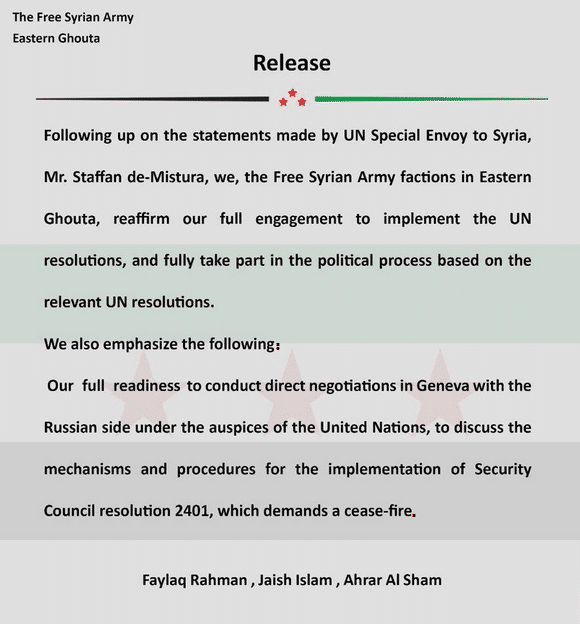