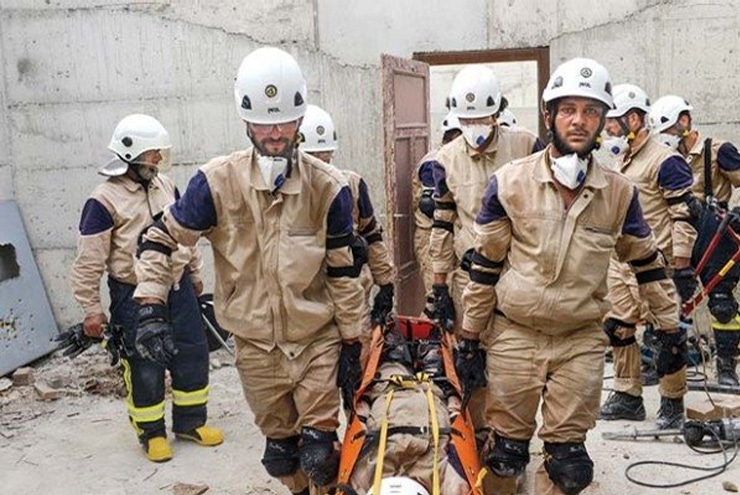 [ Editor’s Note: A lot has happened since Gordon sent this to New Eastern Outlook magazine two days ago. Around 70,000 Ghouta civilians have come out through the escape corridors, and none are condemning the SAA or Assad for bombing and killing them for five years.

They blame the US-backed terrorists – imagine that. I can’t wait to see how the Trump spokespersons are going to spin this Monday morning. That could be a standup comedy event.

There is a big sigh of relief in Damascus today. One of the big jihadi groups in Ghouta is suing for peace. This means the Syrian army may not be tied down for months of street fighting in Ghouta.

That said, even if Ghouta is cleared, the Palestinian camp in Yarmouk is waiting for the SAA next, another one of those underground bastions and a tough nut to crack. But Damascus must be cleared of mortar and rocket fire to assume its roll of leading the peace process, and to eventually redeploy the army to Idilb.

After that, Syria will be dealing with the Kurds who, with the Turks chewing on their tails, might be more open to reconciliation with Damascus. The US and Turkey’s presence will be wildcards in all this.

Anything can still happen. Monday will show how Trumpland will respond, at least for that day’s news cycle. Trump is ranting on about the Mueller investigation, looking like the Israelis with their spies have already passed along some bad predictions for the Donald.

Trump is making himself look like he is guilty, but of what we can’t be sure. It could end up not to be Russian collusion, but something entirely different. And it might even involve his family. It is apparent that Trump is looking more and more worried… Jim W. Dean ]

This isn’t the first time. As this is written, the US, according to the Russian Ministry of Defense, is bringing carrier battle groups into both the Red Sea and Mediterranean to attack both Syrian and Russian Forces inside Syria. 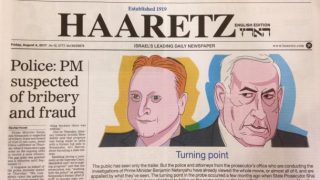 According to a March 16, 2018 article in Israel’s , Israel is preparing for Russia as well and expecting mass casualties.

Russia has warned the US and Israel that it will retaliate on any platform that launches attacks on Syrian Arab Army or Damascus government defense centers which are all shared with Russian personnel.

This simply means that American ships are subject to obliteration and Russia is more than capable of doing so. Why have we come to this point. From Israel’s Haaretz, dated March 16, 2018:

“The army conducted an exercise this week which simulated a multi-front war in which Russia intervened to prevent Israel from attacking Syria.

‘Throughout the exercise, we examined various implications of the Russian presence’ in Syria, a senior Israel Defense Forces officer said.

“We practiced everything that could be coordinated with the Russians and also what couldn’t be, how we would operate without harming their interests in the region, and on the flip side, scenarios in which the Russians made trouble’ for instance, by sending a message that Israel was undermining their regional interests”.

To understand, we can go to news stories from March16, 2018 and statements made by the Russian government. From Sputnik News:

The American and British press refused to carry this statement or any of the others though the general public has every right to know their lives are being played with.

Many of us who work in journalism or the intelligence and security sectors say it is “about time” that someone called out the White Helmets and their role in killing civilians on behalf of Western intelligence agencies. Then these statements came from Russia Today, same date:

“Russia’s Defense Ministry says “US instructors” are training militants to stage false flag chemical attacks in south Syria. The incidents are said to be a pretext for airstrikes on Syrian government troops and infrastructure.

‘We have reliable information at our disposal that US instructors have trained a number of militant groups in the vicinity of the town of At-Tanf, to stage provocations involving chemical warfare agents in southern Syria,’ Russian General Staff spokesman General Sergey Rudskoy said at a news briefing on Saturday.

‘Early in March, the saboteur groups were deployed to the southern de-escalation zone to the city of Deraa, where the units of the so-called Free Syrian Army are stationed’

‘They are preparing a series of chemical munitions explosions. This fact will be used to blame the government forces. The components to produce chemical munitions have been already delivered to the southern de-escalation zone under the guise of humanitarian convoys of a number of NGOs.’”

Russia has warned that the US media is part of this ploy, fully complicit and that media assets working with the CIA but mostly under control of the Israel lobby, which seems to be the driving force behind Trump’s foreign policy.

Further complicating the situation and showing the depth of what is clearly a plan to provoke war is the situation with Britain over the alleged killing, and there is no evidence presented of any kind, of a former Russia agent, that British Prime Minister Theresa May blames on Russia.

Veterans Today editor, Gene Khrushchev, a former Colonel in the Soviet and Russian military and Russian diplomat had the following to say on this in a May 16 article in Veterans Today, in particular tying Ukraine and a desire to fight Russia over Crimea to the situation in Syria:

“The revelation of UK-OUN unsavory liaison was helpfully revealed by British prime-minister during her harangue, when she connected the dots between perpetrators’ joint motives with oh-so-sincere concern about Crimea reunification, which had been, mind you, a deep cover deal in the works before 2014 to sell out the true-blue Russian peninsula – with 90% plus of deep-rooted Russian population – for NATO entrance ticket. Read my lips –no more and will never be at stake again, fat chance, the hell or high water!

If I may to paraphrase Theresa May, I’d say it’s “highly likely” that Mother of all poisonous provocations against Moscow, English style, has been upstaged this time by London in cahoots with Lvov extremists in Kiev:

• Decades of clandestine partnership in crime, sealed by Waffen-SS genocide legacy and Cold War subversive collaboration against the USSR.”

It is not unreasonable to see the Mueller investigation of alleged Russian interference in the US elections as part and parcel of a broader smear campaign against Russia and that, rather than being an attack on Trump, is actually an oblique attack on Russia by forces willing to push the US and Russia to war on behalf of a yet unnamed “third force.”

Will the East Ghouta offense in Syria lead to war? A major US built chemical weapons facility has already been discovered and filmed but those films are censored in the West and censored from the internet by Google Corporation and Facebook.

Similarly, evidence that the White Helmets and news agencies like Reuters, Fox and CNN fabricate reports of chemical attacks as well are censored.

Now Russia is offering evidence that US backed NGO’s using the pretext of “aid convoys” is smuggling chemical weapons to terrorists. Such evidence has existed since 2012 and has been offered to investigative agencies under UN control repeatedly to no avail.

It is known, however, that former US Secretary of State Kerry personally viewed evidence of US complicity in gas attacks on Syria and stopped a Pentagon attack, this was 2013.

This postulates that within the US there is a divergence of command, where rogue operators, allegedly under Israeli or “other” command, are able to stage provocations, even influence policy, outside of normal procedures.

Veterans Today editor, Colonel James Hanke, former Military/Diplomatic liaison to Israel and former chief intelligence officer of the US nuclear command in Europe, has stated repeatedly that that US Army is largely infiltrated with “rogue operators”.

He also says that several top commanders have been “off the reservation” for years. Hanke has cited that the Pentagon has seized policy initiative from both the State Department and Presidency on several occasions.

This leaves us with some broader questions:

Beyond this, does the public have the right to know what is really going on and that the term “fake news” in itself is a deception. We have been well beyond “fake” for some time and too many, it seems, even those capable of starting wars that can kill us all, no longer know what is real and what is not.