Peace is a frightening thing for New World Order agents, Neocon ideologues, and Zionist puppets. They freak out whenever they hear nations are dealing with their differences peacefully, respectfully, and diplomatically.

New World Order agents want bloodshed, death, pain and suffering virtually all over the world, most particularly in the Middle East. They want the destruction of families, nations, and livelihood. This is not conspiracy theory at all. Listen again to one of the most leading lights of the New World Order, Michael Ledeen:

“Creative destruction is our middle name, both within our own society and abroad. We tear down the old order every day, from business to science, literature, art, architecture, and cinema to politics and the law.

“Our enemies have always hated this whirlwind of energy and creativity, which menaces their traditions (whatever they may be) and shames them for their inability to keep pace.”[1]

According to this view, New World Order agents like Ledeen cannot live without “creative destruction.” If there is no destruction, then they have to invent one under the umbrella of “democracy” and “freedom.” Keep also in mind that Ledeen is one of the Jewish Neocons who helped create destruction in Iraq.

Ledeen is known for writing propaganda books like The Iranian Time Bomb: The Mullah Zealots’ Quest for Destruction. He is a former scholar at the American Enterprise Institute, a Neoconservative think tank where he worked with “Prince of Darkness” Richard Perle, and for over twenty-five years was actively involved in “the Jewish Institute of National Security Affairs (JINSA), an activist group that promotes a strategic alliance between the United States and Israel.”[2]

Central to Ledeen’s thesis in The Iranian Time Bomb is that Iran is responsible for September 11th. Not only that, Iran has always sought “to destroy or dominate” the United States![3] Moreover, for Ledeen, Iran is “the mother of modern terrorism.”[4] He believes the best way to destroy “the mother of modern terrorism” is through war. In fact, Ledeen has been a proponent of the idea that peace can come through violent war. “I don’t know of a case in history where peace has been accomplished in any way other than one side winning a war [and] imposing terms on the other side.”[5]

Ledeen also maintains that Iran was the chief mine of terrorism, proven, says Ledeen, by court documents (even though he never tells where to find the court documents or what they actually said); in the same article, Ledeen even implied that the quicker the U.S. invaded Iran, the better.[6]

By invading Iran, Ledeen argued, the U.S. would eventually bring down “the mullahcracy, for they will keep killing our people and our friends.”[7] It is not surprising that Ledeen has been described as “one of the most dishonest and ludicrous jokes on the political scene.”[8]

As the United States moved toward war against Iraq, Ledeen claimed that countries that did not fully support the United States were allying themselves with terrorism. “The Franco-German strategy was based on using Arab and Islamic extremism and terrorism as the weapon of choice, and the United Nations as the straitjacket for blocking a decisive response from the United States,” he wrote, claiming that both France and Germany should be treated as “strategic enemies.”[9] Not only that, he further stated that both France and Germany had “struck a deal with radical Islam and with radical Arabs.”

Although Ledeen admits that the theory “sounds fanciful, to be sure,” he was clear that if it happens to be correct, “we will have to pursue the war against terror far beyond the boundaries of the Middle East, into the heart of Western Europe. And there, as in the Middle East, our greatest weapons are political: the demonstrated desire for freedom of the peoples of the countries that oppose us.”[10]

In response to this, Jonah Goldberg proposed the “Leeden doctrine,” which simply is that “every ten years or so, the United States needs to pick up some small crappy little country and throw it against the wall, just to show the world we mean business.”[11]

Once again we are back to perpetual wars, not only in the Middle East, but wherever neoconservatives like Ledeen want them. As Ledeen himself declared, the level of casualties in the Iraq War are “secondary. It may sound like an odd thing to say. But all the great scholars who have studied American character have come to the conclusion that we are a warlike people and that we love war.”[12]

This is not the first time Ledeen had turned to blatant fabrication in order to promote an ideology—he was one of the people who promoted the falsehood that Saddam Hussein had bought uranium in Niger.[13]

Ledeen later denied any involvement in the matter.[14] Neoconservatives such as Mark R. Levin have stood up for Ledeen, saying things like the “Left’s narrative” has produced a libelous accusation against Ledeen when he had nothing to do with the forgery.[15] 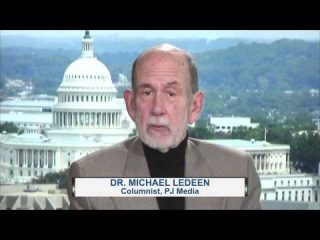 Has Ledeen stopped inventing things over the years? Has he refrained from making one crazy statement after another? Has he repented from perpetuating lies and fabrications in order to drink the blood of people he doesn’t like?

He has recently declared that “there is an anti-American alliance among the world’s leading tyrannies,” and these include Russia, Iran, China, North Korea, etc.[16] Those countries, said Ledeen, “aim to destroy us, as they say with tedious monotony, but hardly anyone here seems to notice.”[17]

Ledeen is mad and sad because he has noticed that people aren’t paying attention to the voice of destruction anymore. He moved on to say: “I ask the pundits ‘what do you think ‘death to America’ means?’ They give me a funny look, as if that was the first time they’d thought about it. And the notion that we face a global enemy alliance seems fanciful to them.”[18]

Well, they ought to give you a funny look, Mr. Ledeen. Why do you think they say “death to America”? Is it because they hate decent Americans so much? Or could it be that the Zionist machine, the New World Order ideology, and Neoconservative pundits have continued to demonize Iran, manipulate Americans, and engage in covert operations to destroy the country?

Ledeen is obviously desperate because he sees that the Neocon plan isn’t really working in the Middle East anymore, specifically in Syria. He lamented:

“Look at Syria, where Assad is currently winning.  Why?  Because of Iranian fighters and their proxies.  Until recently, that wasn’t good enough to save the Syrian dictator.  Now it is, because the Iranians begged Putin to help them.  Which he did.”[21]

Then Ledeen moved on to produce this categorical lie: “As they fight on in Syria, they are preparing to tackle us in the near future. There is extensive evidence of enemy infiltration of the United States, and our hemispheric neighbors.”[22]

The source for this crazy theory? Ledeen cited PJ Media, a thoroughly Zionist and Neoconservative website, which also cited Adm. Kurt Tidd who reported to the Pentagon that Iran is dangerous.

Ledeen is obviously one of the greatest jokers in the history of the Neoconservative ideology. He wants decent American soldiers to give their blood for Israel,[23] while he and his brethren are enjoying a lucrative and influential career. At this current moment, the national debt is $21 trillion![24]