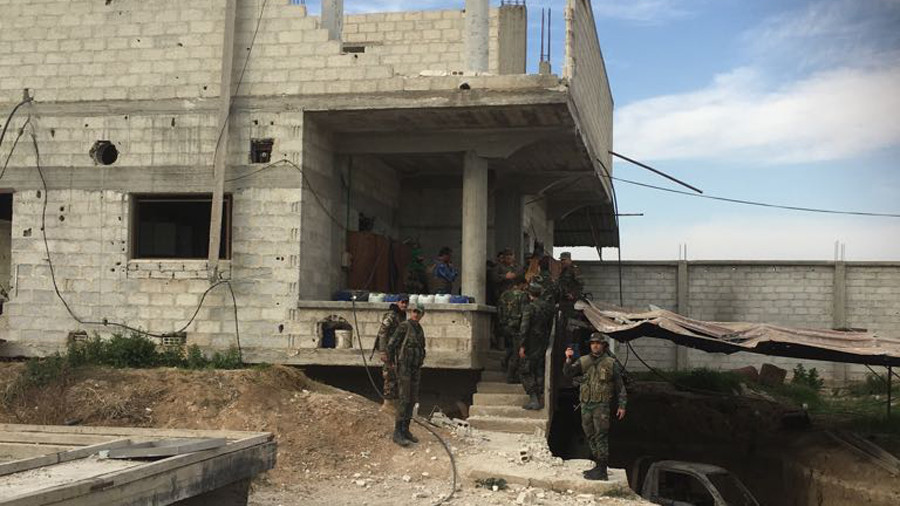 © Sharmine Narwani
The battle of narratives over the use of chemical weapons in Syria has been raging ferociously for years. But a chemical lab discovered in Eastern Ghouta this week is set to change the parameters of the discourse.
Editor’s note:  The company whose equipment was found at the Saudi financed chemical weapons facility was Hill Rom, a US medical supply company with facilities in the UK that supply the Saudis.  This is their management team.  We strongly suggest someone ask them what they know about how their equipment is used: Last December, at a US military hangar near Washington DC, UN Ambassador Nikki Haley showcased an over-sized metal pipe as evidence of Iran’s military collusion with Yemen’s Houthi rebels. That picture hit every front page in the western hemisphere, drowning out the many objections that a big pipe on an American stage proves nothing.

This week, the Syrian Arab Army (SAA) liberated some Eastern Ghouta farmlands between Shifouniyeh and Douma and discovered a well-equipped chemical laboratory run by Saudi-backed Islamist terrorists. Not a single Western reporter showed up to investigate the facility. 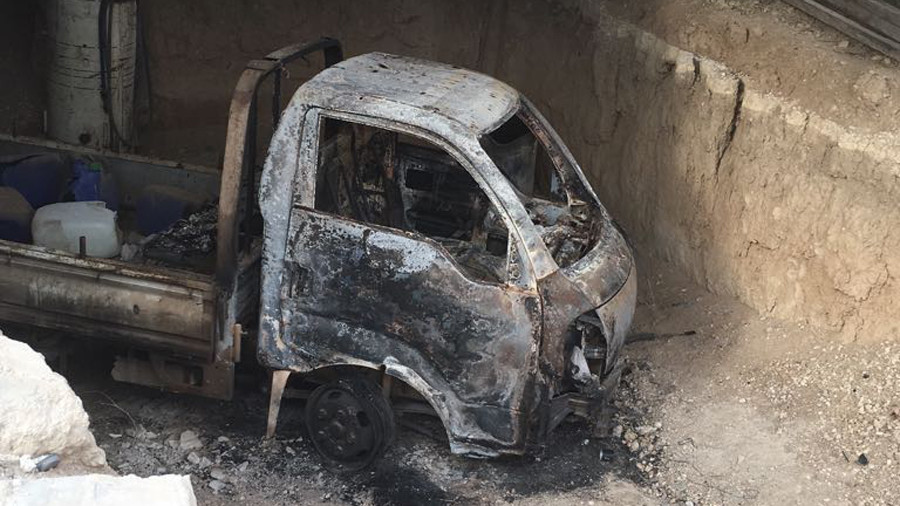 The media disinterest is strange, given that US officials appear poised to green-light military attacks against Syria, which they claim has used chemical weapons (CW) against civilian populations. This charge remains unproven and highly contentious, with other parties arguing that anti-government militants are employing CW munitions to provoke a US military intervention against Syria.

So perhaps it’s not so strange that a chemical lab discovered right at the epicenter of a major strategic battle over Syria is being ignored by one side. In the end, it is likely that only one side is right about who is using CWs in Syria. Which is why one side went silent when this lab was revealed.

The chemical facility lies only a few dozen meters away from the current military frontline and was liberated as recently as Monday. The lab is surrounded by farmlands – the last place one would expect to find this stash. I see fields of wheat, green peas, beans and chickpeas scattered liberally in a conflict area Western media dubs a “starvation siege.” The building itself is shell-pocked and littered with debris, like so many of the structures I pass in Shifouniyeh and other towns in Eastern Ghouta where war rages. 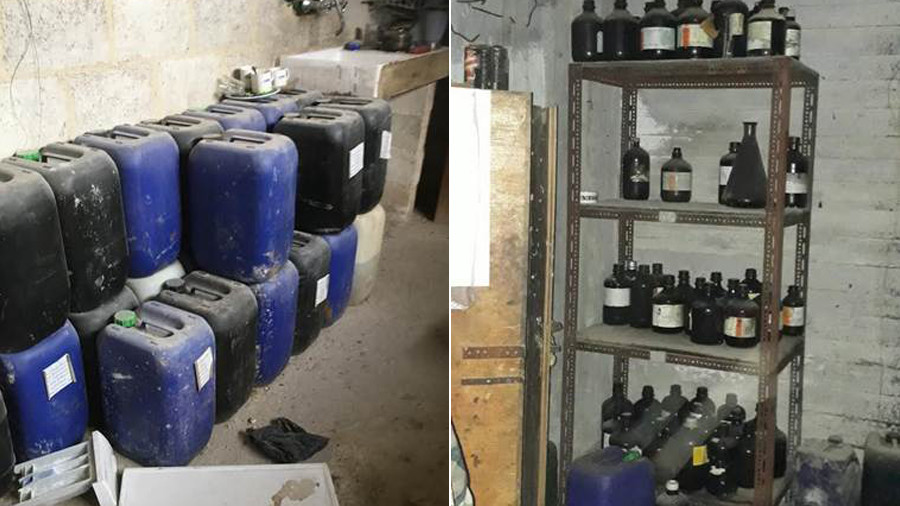 According to the SAA, these canisters lined up against the walls in several areas of the lab, contain chlorine / Shelves and cupboards of chemical substances are dotted around the facility’s upper floor © Sharmine Narwani

But the sight inside is astounding. Upper rooms packed with electronic hardware, basements outfitted with large boilers, shelves filled with chemical substances, corners heaving with blue and black canisters (reportedly containing chlorine), chemistry charts, books, beakers, vials, test tubes and all the paraphernalia familiar to the average student of science. And then, in several corners, piles of pipe-shaped projectiles – clear munitions of some sort.

There’s one real standout in an upper room of the facility. It’s a newish looking piece of equipment with “Hill-Rom Medaes Medplus Air Plant” written on its front. A cursory Google search pulls up several interesting facts immediately – the machine is some kind of air or gas compressor, it’s a US-manufactured product, and Saudi Arabia put out tenders for this device in 2015. 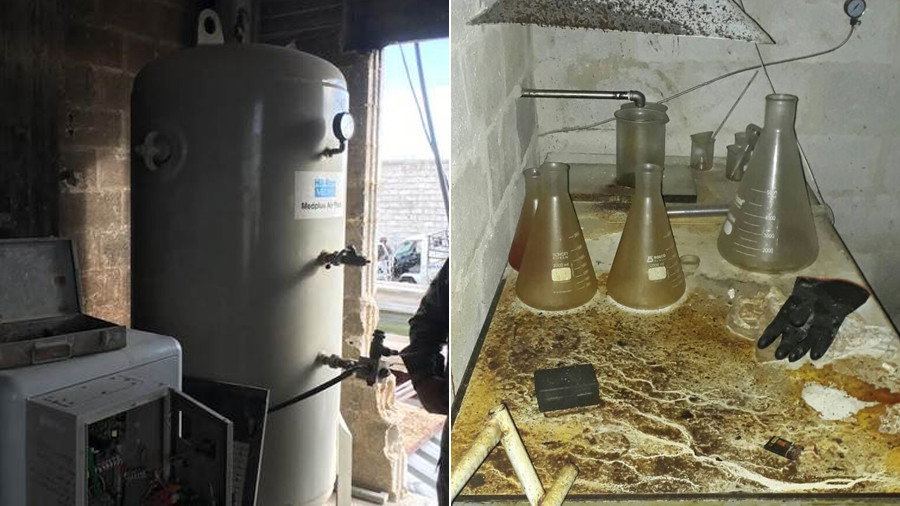 A list of numbers and phone extensions taped to the wall confirms that this area – and the lab – was controlled by Jaysh al-Islam, a Saudi-backed terrorist group whose political figurehead Mohammad Alloush was once invited to head up the opposition delegation at UN-sponsored Geneva talks.

The Saudis have been caught out many times during this conflict for diverting equipment and weapons to the Syrian battlefield – purchases that were intended by the seller to be used only by a Saudi end-user. The Hill-Rom compressor, like most Western scientific equipment, would have been banned for sale to Syria under tight sanctions laws. Even if not created for military purposes, many such products are viewed by US officials as featuring “dual-use” technologies.

The Syrian officers on duty at the lab site could do little more than point out the obvious items of interest in the facility. They had only been there 24 hours and had not yet fully deciphered its intent. They had examined the blue and black canisters and discovered chlorine – a substance that has repeatedly been used in small quantities on the Syrian battlefield and has drawn widespread international censure.

Is this a chemical weapons lab? Or simply a chemical lab manufacturing a substance used in warfare – like explosives?

Even if no banned chemical munitions are found to be produced at this lab, its discovery is a game-changer in the chemical weapons blame-game. It is now indisputable that Western-backed and Gulf-financed Islamist militants have the capabilities to produce the chemicals of war inside the battlefield – and not in the makeshift way that media suggests. This lab demonstrates that militants can amass foreign-made equipment, create production lines and procure difficult-to-obtain components.

It can no longer be argued that militants lack the ability, connections and skill-sets to manufacture chemical munitions. 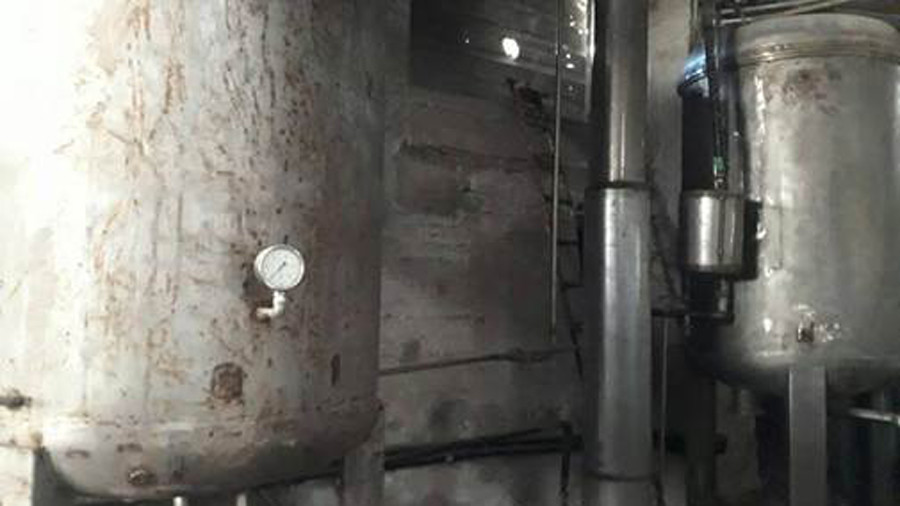 There is ample evidence that terrorists have been using low-grade and unsophisticated CWs in the Iraqi and Syrian military theaters.

The use of the nerve agent Sarin in Improvised Explosive Devices (IEDs) by insurgents in Iraq has been documented by the media since 2004 – and in detail by the CIA, which links the substance to lost or pilfered stock from Iraq’s old chemical munitions program.

Chlorine IEDs were also first used in Iraq that same year, but it was in 2007 that an aggressive chemical war was launched in Anbar province and other parts of the country by Al-Qaeda in Iraq (AQI), which used chlorine bombs in suicide attacks.

Fast forward a decade or so. In 2016, the UK intelligence analysis firm IHS Conflict Monitor issued a report saying that Islamic State (which evolved out of Al-Qaeda in Iraq), has used chemical weapons, including chlorine and sulfur mustard agents, at least 52 times in both Syria and Iraq.

In Syria, the trouble began in December 2012 when the Al-Qaeda-linked Al-Nusra Front (a former IS ally), took over the country’s only chlorine manufacturing plant, a joint business venture with the Saudis located east of Aleppo. Damascus issued an immediate warning to the UN: “Terrorist groups may resort to using chemical weapons against the Syrian people… after having gained control of a toxic chlorine factory.” 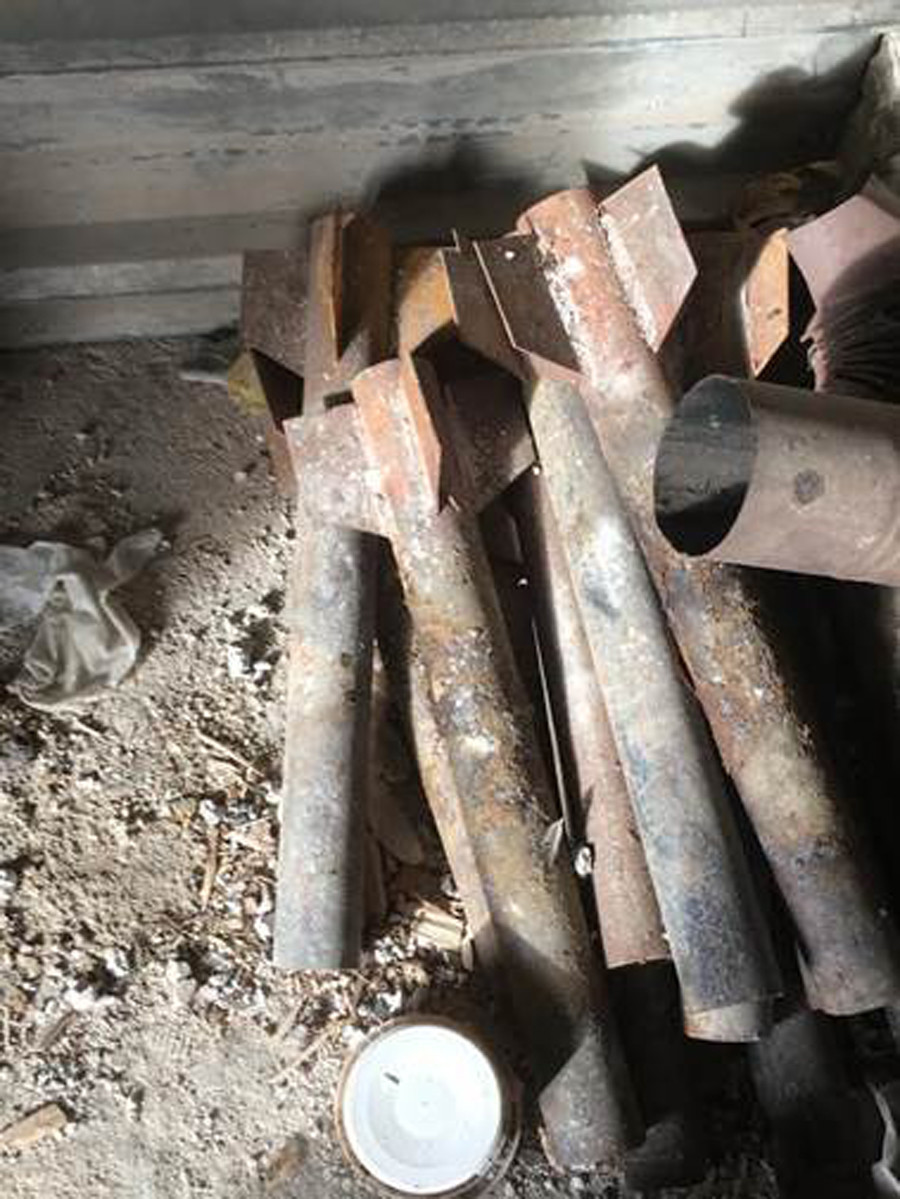 Three months later, in what is viewed as the first real CW incident of the Syrian conflict, 26 people – the majority of them (16) Syrian soldiers – were killed in the village of Khan Assal in Aleppo in a reported chlorine attack. The next day, the Syrian government requested that the UN investigate the attack. A few days later, there was another alleged chemical incident in Adra, northeast of Damascus, followed by a reported attack in Saraqeb, and then in Ghouta in August – the CW incident that almost triggered US military strikes. A Jordanian reporter on the ground in Ghouta interviewed witnesses who said the Saudis had provided militants with chemical weapons and that some had been detonated by accident.

In May 2013, Turkish authorities captured 12 Nusra Front militants with 4.5lb of sarin gas. Turkish media carried varying reports about the terrorists’ goals – one of them was that the group was planning to take the materials back to Syria, Nusra’s home base.

In June, members of an Al-Qaeda cell were apprehended by Iraqi authorities who raided two Baghdad factories that were used to research and manufacture sarin and mustard agents. Authorities said that the AQ militants had precursor chemicals and formulas necessary for the production of the deadly CWs.

And so on and so forth. But back to the lab in Eastern Ghouta.

The lab’s occupants, Saudi-backed Jaysh al-Islam, publicly admitted in 2016 to using toxic agents in mortar attacks against Kurds in the Aleppo neighborhood of Sheikh Maqsood. “During the clashes one of the Jaysh al-Islam brigades used [weapons] forbidden in this kind of confrontations,” the group said in a statement about the chemical attack, in which it claimed the perpetrator would be held accountable.

The statement is relevant in only one way. It confirms the group has chemical munitions. 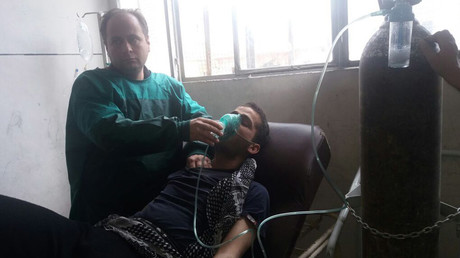 Who benefits from CWs?

In mid-2012, the Syrian government confirmed for the first time that it had chemical weapons, but stated these were only for use against “external aggression” and never against the Syrian people.

This statement could be viewed with the same skepticism as the one by Jaysh al-Islam, except for one thing: chemical weapons in no way, shape or form – neither politically nor militarily – benefit the Syrian government in this seven-year conflict. It’s why the Syrian government unilaterally admitted to its CW program and was so willing to relinquish it under US and Russian supervision.

The amount of CWs used on the Syrian battlefield is negligible in comparison with the scope and violence of the war. Why use a highly provocative weapon that kills only a few dozen people when you can use conventional munitions that can do a cleaner job?

And why risk the ire of the entire international community – and further isolation – when what you want most is to avoid foreign military intervention that can take out your military bases in mere days?

It’s telling that throughout Syria’s conflict, “massacres” and “chemical attacks” have taken place mostly when militants are facing setbacks or stalemates – or when important events like UN Security Council meetings loom.

What better opportunity to galvanize the international community to condemn, sanction, punish or bomb your enemy than with gruesome scenes of bodies convulsing and children gasping for air?

It really doesn’t matter what is found in the chemical lab at al-Shifouniyeh farms. The occupants of the lab, whether Al-Nusra, Jaysh al-Islam or IS – two of which are currently militarily active in Eastern Ghouta – have provided the last piece of the chemical weapons whodunnit puzzle. They always had the motive to stage chemical warfare in Syria, but now we can see they have the means and capabilities too. 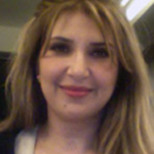 Sharmine Narwani is a commentator and analyst of Middle East geopolitics. She is a former senior associate at St. Antony’s College, Oxford University and has a master’s degree in International Relations from Columbia University. Sharmine has written commentary for a wide array of publications, including Al Akhbar English, the New York Times, the Guardian, Asia Times Online, Salon.com, USA Today, the Huffington Post, Al Jazeera English, BRICS Post and others. You can follow her on Twitter at @snarwani