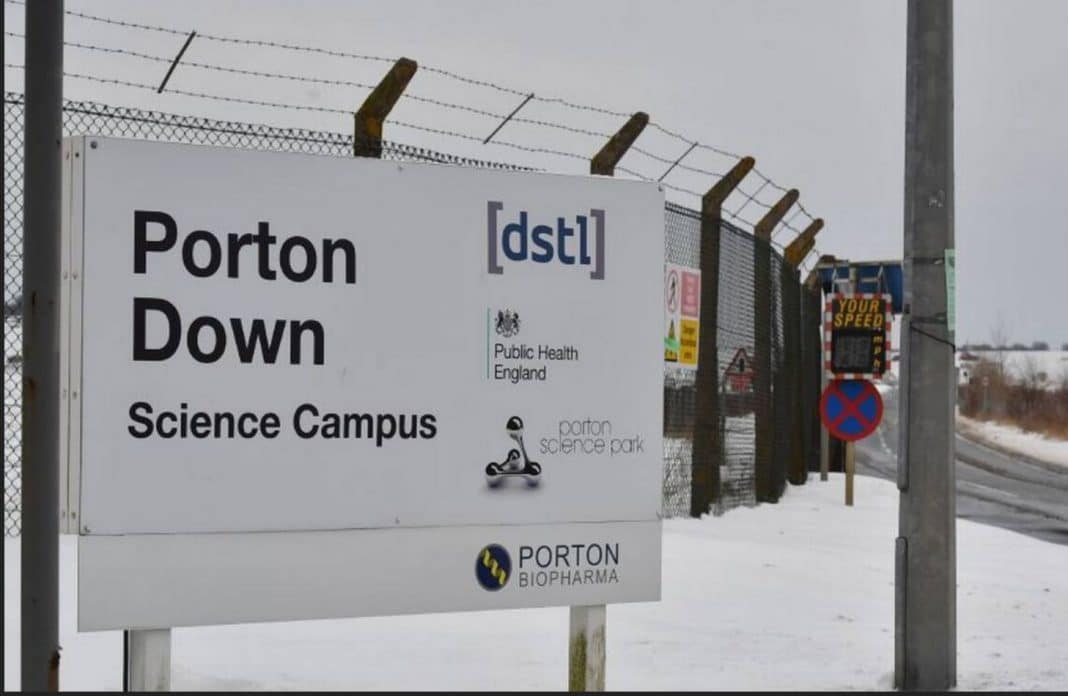 [ Editor’s note: Russia is claiming that Britain staged the Skripal attacks themselves. For those unfamiliar with this “tempest  in a teapot” story, two people got sick  sitting on a park bench.  Nobody knows how sick.

Britain and Trump is/are claiming that the Russians did it with a special secret gas only they make that is 100% fatal. Then again, the US and Britain have been caught over and over staging gas attacks inside Syria and blaming others as well.

Thus far the evidence is overwhelming:

Trump  is a moron working for  the Kosher Nostra. Britain is corrupt to the core. The mainstream media is totally controlled and its war with Trump  is as fake as Trump himself. This story is boring the hell out of me… Gordon Duff ]

The Russian Foreign Ministry and Russian Defense Ministry have jointly delivered a statement after a meeting with foreign envoys amid the scandal surrounding the poisoning of ex-spy Sergei Skripal.

According to Vladimir Ermakov, head of the non-proliferation and arms control department at the Russian Defense Ministry, “either the British authorities are unable to protect from a terrorist attack on their territory or staged the attack themselves.”

“Russia owes nothing and can bear no responsibility for the actions or lack of actions on British soil,” Ermakov added.

The attack on the Skripals is a “gross folly,” which is not beneficial to Russia, he stated.

“Two Russian citizens were attacked on the territory of Great Britain. We ask to give us all the information about this, we believe, terrorist act against Russian citizens on the territory of Great Britain. But we don’t get anything,” Director of the Department for Nonproliferation and Arms Control at the Russian Foreign Ministry Vladimir Yermakov said at a briefing on Skripal case for foreign diplomats in Moscow.

“Moscow’s list of questions for London regarding the Skripal case is growing,” Vladimir Ermakov added.

Russia isn’t satisfied by the UK’s answers about the Skripal case and the British have left the most important questions unanswered.

“If the subject of the investigation has not been determined reliably, and all facts are being intentionally hidden, and real evidence may have already disappeared, which has happened in the United Kingdom many times, then it is not clear what issue the UK side has,” Ermakov told a briefing.

“We took one more step forward. We suggested that the British conduct a joint investigation to identify the perpetrators of the Salisbury incident. For this, naturally, we requested access to all the case materials being investigated by Scotland Yard. Without this, it is simply impossible to get a clear picture of what is really happening,” Vladimir Ermakov said.

READ MORE: Nerve Gas in Skripal Case ‘Could Have Easily Been Done by Brits’ — Developer

Earlier, the OPCW confirmed that Russia had preliminarily destroyed all chemical weapons in its arsenal, the official said.

“The West is ready to use any means it can to discredit Russia, incidents in Khan Sheikhoun show that,” Vladimir Ermakov said.

The UK’s closest ally is the only state having the biggest chemical weapons’ arsenal in the world, he added.

Russia is interested in seeing that there are no questions between Moscow and the West regarding Skripal; from the British side there is no such approach, Ermakov said, adding that Russia is “shocked by statements made by UK politicians.”According to a British Embassy representative, London wants explanations whether Russia produced a substance dubbed “Novichok.”

For his part, the Russian Foreign Ministry official emphasized that Moscow had repeatedly asked for a joint probe into the Skripal case and for access to the relevant materials, including the poisonous substance.

“In conclusion I would like to stress that we are closely following the developments of the Skripal case… I am sure that in time, the culprits and participants of this provocation will be punished… I would like to additionally stress that Russia does not accuse anyone of anything,” Ermakov told a briefing.

As Russia has not produced any unrepresented chemical substances under the OPCW convention, there are no such reserves in Russia. Russia did not accuse Sweden of anything in the case of poisoning of former Russian spy Sergei Skripal in the United Kingdom, Vladimir Ermakov said Wednesday.

When asked by the deputy Slovak ambassador to Moscow about the statement made by Russian Foreign Ministry spokeswoman Maria Zakharova, the ministry official stated that “Slovakia was mentioned as a [former] part Czechoslovakia.”

The Russian Defense Ministry has commented on allegations of Damascus’ use of chemical weapons. According to a ministry official, the Syrian Foreign Ministry had informed Moscow that tons of poisonous substances had been found after the liberation of territories from militants.

Busted chemical provocations in Syria “destroyed the coalition’s plans to launch a strike” against Damascus, according to the Russian Defense Ministry.

“It is obvious that the uncovering of the provocations which were being prepared derailed the US-led coalition’s plans to deliver strikes on key Syrian objects,” Kirillov told a briefing.

“It seems that Britain is afraid to conduct an unbiased investigation” into the Skripal case, the Russian Defense Ministry representative added.

The UK has presented no proof that the gas allegedly used to poison Skripal was made in Russia, he added. The United Kingdom first synthesized the VX nerve agent in 1962, according to the Russian Defense Ministry.

The formula of the substance dubbed “Novichok” was published by scientist Mirzayanov, who is working for the US government, according to the Russian Defense Ministry.

The ministry suggested that Mirzayanov, under US influence, could have written the formula of the poisonous substance in his book, allegedly used to poison Skripal.

“It is a gross violation of the Convention on the Prohibition of Chemical Weapons,” Russian official said.

According to the ministry, Britain “was and is one of the states that have been implementing a program on the development of new chemical weapons since 1970s.” He added that the Porton Down lab in Britain is used to conduct experiments, involving the use of chemical weapons.

The patent for the British-developed toxic substance was later sold to the US, the Russian Defense Ministry representative stressed.

Russia has questions about the UK sending about 50mln pounds to the Porton Down laboratory and whether they are trying to destroy Novichok there, the Russian Defense Ministry representative added.

Russian Foreign Ministry spokeswoman Maria Zakharova said that all foreign ambassadors to Russia had been invited to attend a meeting on Wednesday. While EU ambassadors, except Britain, have agreed to attend the meeting, the US envoy hasn’t taken part in the talks.

Earlier, UK Prime Minister Theresa May said that it was “highly likely” that Russia was responsible for the Salisbury incident.

Yesterday, Russian diplomats had to leave the UK, as British Prime Minister Theresa May announced a batch of anti-Russia measures in wake of the poisoning of ex-Russian intelligence officer Sergei Skripal, which was blamed on Moscow.

The Russian Foreign Ministry denied all the allegations and requested the UK to allow a joint investigation into the case.