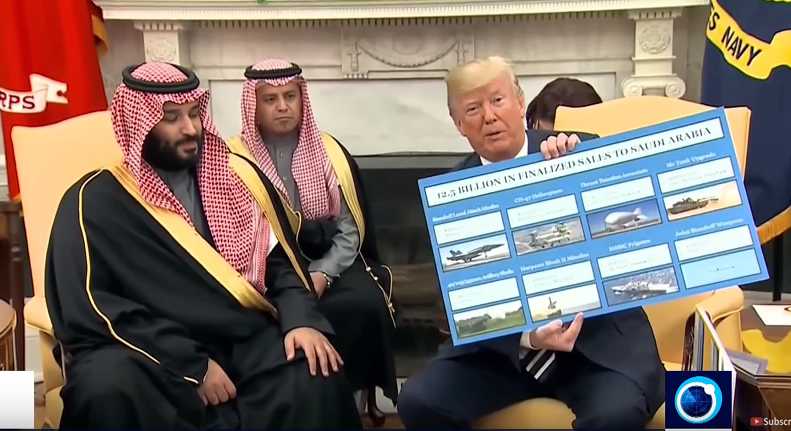 [ Editor’s Note: It been a pleasure to have done these Debate Shows for a number of years, and even moreso when one draws a nice meaty topic, which Crown Prince Salman’s three week “Coming to America” road trip certainly is.

It gave me a wonderful opportunity to use some of my best material on the too young prince, and the not so wonderful country that he represents.

But I did look for some openings that no one else was touching. I found one big one in his attempt to raise tens of billions in US investment capital will of course be tens of billions that will not be invested here to rebuild American and increase jobs.

Will the Democrats be smart enough to jump on this, after they struck out on not backing the tax cuts, which boomeranged on them? This would be a chance to redeem themselves on the front end of midterm elections.

Or will Trump pull this off by pitching that if we expect the Saudis to spend billions on US weapons why not let them divert a chunk of the US returning foreign capital, which by the way is creating dollars shortages in EU banking, and take it right back off-shore again, in Washington merry-go-round fashion?

I predict that Trump’s weapons order cue card could end up competing with Bibi and his bomb chart the bombed so well ad the UN. You just can’t make this stuff up.

It was a joy to be able to talk about Saudi Arabia being a fake country, and that if they gave women the right to vote and work they could end up running the country a hell of a lot better than the men, who seem to avoid work like the plague.

We might even see a “women’s coup”. Oh what a joy that would be, especially the executions, to see of they changed what they cut off … Jim W. Dean]

In this edition of The Debate, Press TV has conducted an interview with Jim W. Dean, the managing editor of Veterans Today from Atlanta, and Brent Budowsky, a columnist of The Hill from Washington, to discuss the consequences of Saudi Arabia’s Crown Prince’s recent visit to the US.

This is what we call a “contrast video”. A view of immigrants from another time, unlike the one the Saudis have now. This is Neil, singing America last year, a good bit older from it debut, but still able to do it. We hope we should all be so lucky.