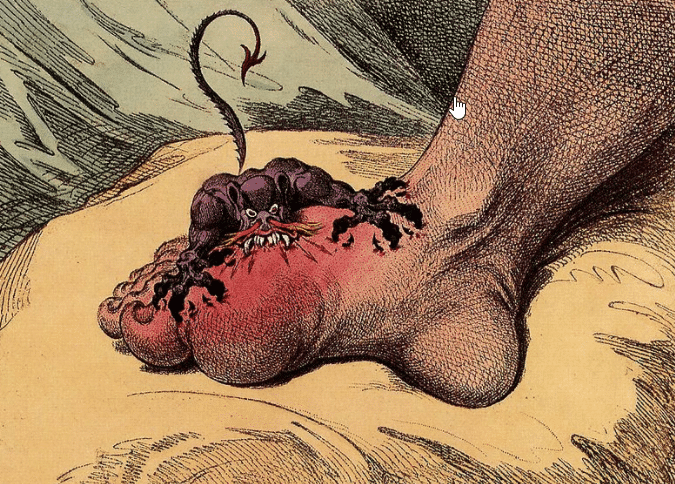 Health Editor’s Note: Several years ago I wrote an article about recognizing and treating gout. That article is located at:

Since the numbers of those who are diagnosed with gout are rising exponentially, I thought it would be a valuable health lesson to once again look at this disease.

Supposedly, Henry the VIII greatly suffered from gout. Gout has been plaguing mankind for centuries and the numbers of gout sufferers has steadily risen as the human diet has become richer. Gout is a disease found in developed countries who have the resources to grow/produce food which are rich in purines. Gout is one of the forms of arthritis and thus becomes a chronic ailment with occasional flare-ups from time to time…..Carol

Gout gets a bad rap as a dietary disease rather than the complex, chronic inflammatory disorder that is ineffectively treated in many, according to a perspective article in the Journal of the American Medical Association.

The author and experts interviewed believe that the pipeline of new drugs for gout will fuel the future of evidence-based care and more informed lifestyle instruction.

Gout affects about 4% of adults in the U.S. The growing number of older adults, who are more likely to have gout, is expected to increase the need for gout care.

“The disease of kings” is clearly a misnomer as gluttony and excess seldom stand in the way of better care. Sadly, many with gout fail to recognize it as a form of arthritis, A 2016 online survey showed that 71% of patients didn’t know gout, and that half with gout were embarrassed by their condition.

Although diet is often implicated, evidence proving the benefits of strict avoidance are limited. While red meat, alcohol, sugar-sweetened soft drinks, and seafood have been implicated, the American College of Rheumatology (ACR) guideline suggests that avoidance of purine-rich organ meats (liver), shellfish, and sardines may only improve serum uric acid levels by 10% to 18%.

Many experts have noted the limitations and pitfalls found with a dietary approach to gout.

A real problem are the differing treatment approaches and understanding of gout by primary care physicians (PCPs) and rheumatologists, exemplified by their contrasting guidelines. The 2012 ACR focuses on a a treat-to-target approach with the goal of a uric acid levels below 6 mg/dL, and the use of urate-lowering medications long-term with frequent monitoring.

Yet the 2016 American College of Physicians (ACP) guideline only has a treat-to-symptoms approach emphasizing the use of anti-inflammatory medications to control flares and reserving uric acid-lowering therapy for patients with frequent flares.

Discrepancies between the guidelines may be hampering patient care, and hopefully upcoming meetings between the ACR and ACP may resolve these differences. The ACR’s gout guideline is scheduled for release in 2020.

Emerging evidence suggests that a chronic disease care model for gout, which simultaneously addresses uric acid levels, lifestyle, and dietary factors, may improve management and outcomes for patients with gout.

Jack Cush, MD, is the director of clinical rheumatology at the Baylor Research Institute and a professor of medicine and rheumatology at Baylor University Medical Center in Dallas. He is the executive editor of RheumNow.com. A version of this article first appeared on RheumNow, a news, information and commentary site dedicated to the field of rheumatology. Register to receive their free rheumatology newsletter.

Journal of the American Medical Association