For a heretical (i.e. truthful) view of current events, watch False Flag Weekly News above, and click HERE for this week’s stories.

We are obviously on the brink of World War 3. Twice this month, panicked phone calls between top US and Russian military leaders have staved off nuclear annihilation. But with John Bolton and Mike Pompeo in charge, the odds of putting it off much longer don’t look too good.

So millions of people are demonstrating against their leaders’ plans to turn them and their loved ones into radioactive embers…right? Wrong. The big demonstrations grabbing front-page MSM headlines are demanding that the people should be disarmed—while the psychopaths planning to murder most of humanity should have a complete monopoly on increasingly lethal weapons.

As Kirk Douglas says in Paths of Glory, “There are times I’m ashamed to be a member of the human race. And this is one of those times.”

Below are the highly apropos comments of two False False Flag Weekly News fans, the brave and insightful sisters Cathleen and Colleen McGuire. (You can also listen to Cat McGuire explain ecofeminism on my radio show.) 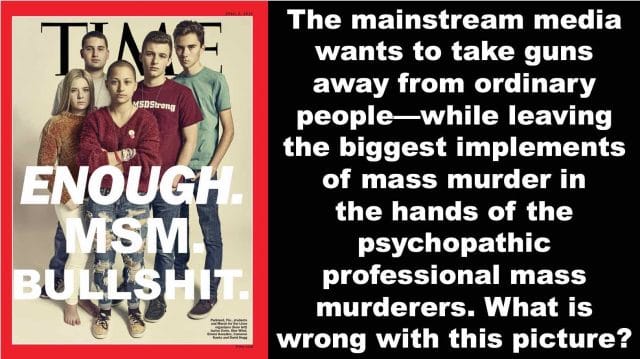 Who are the largest segment of people actually getting killed by guns in America?

​White students?  Hell No.   African Americans by far.   Oh, but Time redeems itself by putting the just barely dark woman front and center in their Enough cover story.  And in the upper right there’s the FBI’s son doing his Deep State internship.

Where is a march for the bigger guns?   I’m talking about the 26,171 bombs dropped by US military in 7 countries in 2016 alone causing deaths to hundreds of women and children of color.    Far bigger and far more destructive guns causing deaths in our name . . .but no one in U.S. organizes a march about that.   Shameful.

Thoughts on the “March Against Gun Violence”

Where is our antiwar movement?  We’re 5 seconds away from WWIII and what are people galvanized by?  They’re begging the government to take away our second amendment right to defend ourselves against a tyranical government.  Really?

Don’t people know that every dictatorship in the past has been preceded with disarming the citizens by taking away their guns?

I actually had to go past Columbus Circle on Saturday and saw thousands of people lined up to march. I also saw dozens and dozens of people (in blue) at the march packing guns, but curiously none of the marchers clamoring for gun control seemed to notice or care.

An every bigger irony was that there was a Parkland march in Tel Aviv. Israel is gunning down hundeds of palestinian children every year in their own back yard, but oh, no, let’s all mourn the deaths of school kids thousands of miles away in a whole other country.

And why are these marches for gun control happening all over the globe anyway?  Since when did other countries have a gun problem comparable to that of the violent USA?  I guess if you have the template and big bucks, why waste a good psyop on just one country?

Bottom line, I’m for gun abolitionism!  Until the marchers include gun control for the police state as well, count me out on this march the 1% has brilliantly orchestrated mass-psychology-of-fascism style.

Nothing like being whipped into a protesting frenzy. Who knew staged school shootings could usher in such a massive power grab by the police state?

O glorious police, make us safe from these psychotropic-addled young men. We want only you, brave gladio gladiators, to be the sole shooters. O powerful protectors, our march is your gain. Forgive us for ever having called you “pigs.”

We want you to get ever more armed to the teeth with recycled Iraq War weaponry.  We beg you to patrol our schools and turn them into child-safe paramilitary fortresses.

Who cares if we don’t yet understand the consequences of this big gun control march we haven’t thought through beyond our nose. Who cares if we accept at face value what they’ve told us about the shootings and not looked into the forensic evidence ourselves. We’re fired up and we’re going to make sure they confiscate every single gun owned by every single private citizen.

Oh, this isn’t about taking all the guns? This isn’t about massaging the laws boiling-frogs-style to yield ever more fascist control? This isn’t about preemptive detainment that authorizes police with zero psychiatric training to assess someone’s social media posts as “dangerous,” come to their home, and haul them into a mental facility for who knows how long?

I guess I should just stop worrying my pretty little head over all that fine print in the anti-Constitution laws being written in multiple states as we speak — all under the mandate of “gun control” of course.

Who paid for this whole march extravaganza anyway?  Those two neoliberal billionaires both named George, uh?  Well, they sure got us a lot of professional-level branding. And check out that publicity! Since when did grassroots activists ever get on the cover of Time?

What else could these super-organized teenagers lead the way on?  Hey, let’s have them get the government to chip us all for free!! Yeah!  Great idea!  Let’s start with babies!  Let’s have a Million Moms March on Washington, all mothers bring their babies to DC to get chipped gratis on the spot.

Wow! Now that we’re in bed with the Establishment, there’s just a multitude of marches to goosestep at while our elite marionetteers crank up the Mighty Wurlitzer.  Woohoo!  Power to the People, post-911 style.