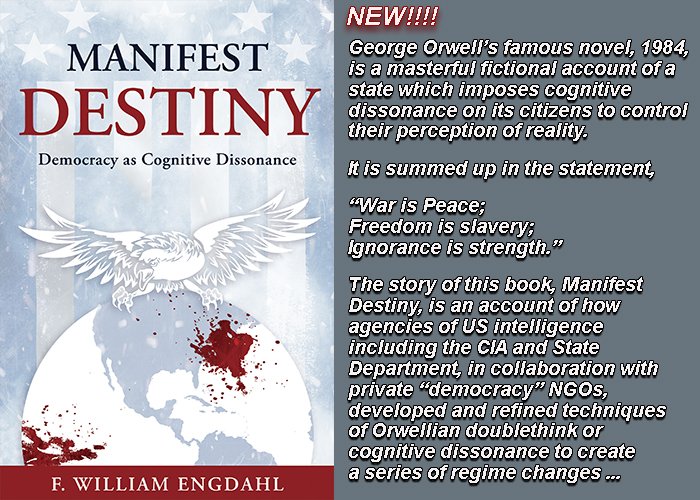 Leading geopolitical analyst William Engdahl discusses his new book Manifest Destiny: Democracy as Cognitive Dissonance: “I decided to write this book because every spot in the world where there’s a regime that doesn’t click their heels and bow down on their knees to Washington—to George W. Bush, Obama, or the Trump Administration—they get targeted for regime change. They get targeted for destabilization and destruction (supposedly for the sake of ‘democracy’)…So I decided to do an in-depth analysis of what this fake democracy monster is.”

The book covers the Empire’s rape of Russia and China, its bust-up of Yugoslavia, its sponsoring fake “color revolutions” in Georgia, Ukraine, and elsewhere, and its genocidal annihilation of the Middle East—an assault that includes the phony, empire-orchestrated “Arab Spring.”

We discuss the amazing fact that the most famous (in the West) event in the past 40 years of Chinese history—the supposed Tiananmen Square massacre—never happened!  (What does that tell us about the credibility of Western journalism and historiography?)

Since William Engdahl is one of top experts on the geopolitics of oil, we also discuss how global “energy wars” are behind some of the conflicts that are usually presented in ideological disguise—such as Qatar’s pipeline-driven participation in the Empire’s war on Syria.