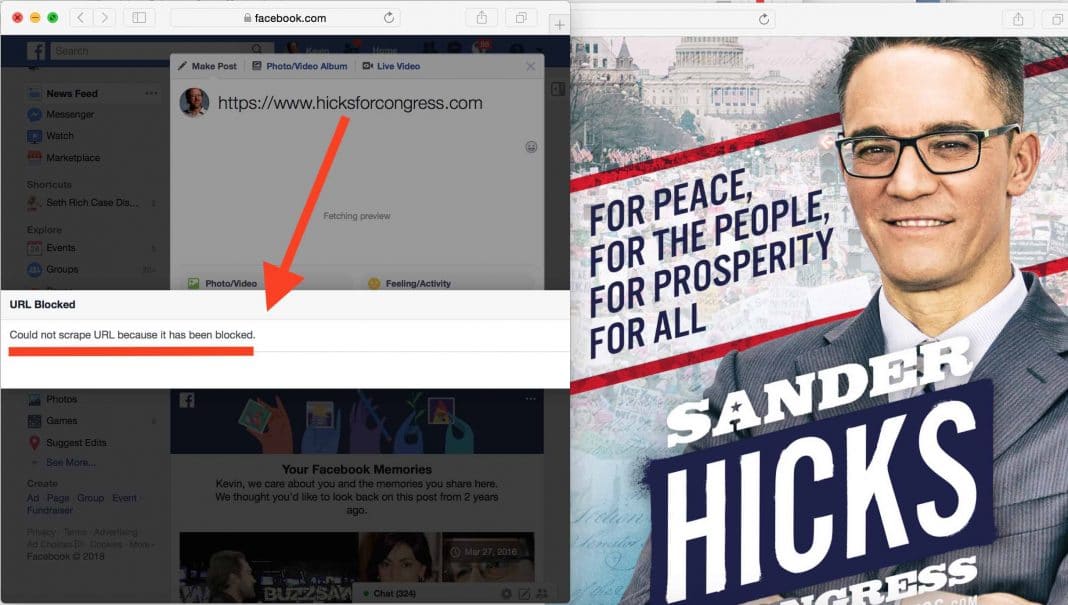 In an outrageous act of political censorship, Facebook is preventing people from sharing the website www.HicksForCongress.com. The censorship has been ongoing at least since last Friday, when Sander Hicks broke the story on my radio show.

“Hope that everyone…can make a contribution, of whatever you can spare, to http://www.hicksforcongress.com

“We have some big rich enemies, but we have something else on our side: the truth. This is David Versus Goliath.
“Yes, it’s true that our site can’t be linked to from Facebook now, ever since I said this to “Town and Village” newspaper:

“In the Middle East, we are on the wrong side,” he said. “We back an oligarchy, the monarch of Saudi Arabia, which cuts off people’s heads and doesn’t let women drive. We back Israel, which is responsible for international war crimes for settlements in the West Bank. That’s not Israeli land. I know this is a sensitive issue. I know my opponent, Congress Member Maloney, is extremely pro-Zionist. This does not mean I’m anti-Israel or that I want to cut off all aid.”

His last statement was in response to a request for clarification of a statement on his website that could indicate as much.

On it, he writes, “There has to be a new path to peace in the Middle East. Remove the massive funding for the war machine and its support for Zionist aggression. Fearlessly expose Israel and the CIA’s role in 9/11/01. End the demonization of Islam and grant full statehood and human rights to Palestine.”  https://town-village.com/2018/03/12/sander-hicks-maloney/

Given its immense power and de facto monopoly on social media, Facebook has an obligation to be politically neutral. While I personally think supporters of Israel are guilty of crimes against humanity, including propagandizing for genocide and conspiracy to commit genocide, I also respect the Bill of Rights, and would be outraged if Facebook blocked Congressional candidates like Hicks’ opponent Maloney who support the genocide of the Palestinians and want to force US taxpayers to pay for it. Maloney should definitely be arrested and tried for crimes against humanity. But she should not be blocked on Facebook! Such censorship is treason, another capital crime, against the First Amendment of the US Constitution.

Facebook should be seized and run as a public utility. As such, it would have to maintain absolute political neutrality and respect the Bill of Rights.