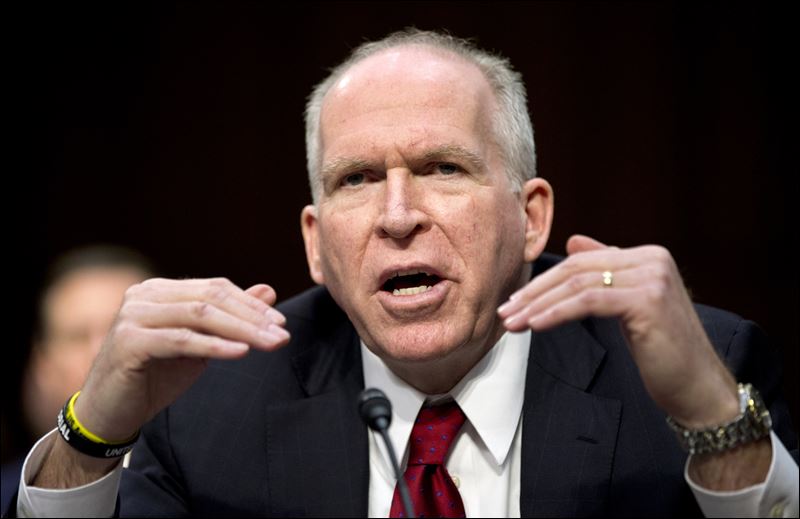 [ Note: Trump has blood in the water now, his own and some left over from Obama, with the jihadi chemical-weapons factories and the 40-ton stockpile found in East Ghouta, much of that is from his watch, and an addition to his presidential library.

The White House’s jumping onboard the British nerve agent scam is going to blow up in its face, especially if I am right that the Brits ran this whole operation themselves in a desperate play to take public focus away from things like the Cambridge Analytics Brexit scam, along with the history of its election-rigging efforts.

Unreported so far is that Cambridge Analytics is the tip of the iceberg in such activity for the British government, which has been “influencing elections” as long as the US, but with a smaller budget.

VT exposed all of this at the Damascus Counter-Terrorism Conference when Gordon put the whammy on the conference that all the ongoing wars were neither country-level nor religiously driven, but had international crime rings at the helm, where the countries involved are just lieutenants, making the chump taxpayers foot the bill.

After I sent this in to NEO, and they were hacked, we had the letter advocating the US remaining in the JCPOA, signed by a hundred Who’s Who list of top former and current US officials – military, diplomatic, political and prominent civilians – a broad constituency.

This is the leadership stepping out on point to encourage others to follow that I editorialize about from time to time. Few dare to go where no one has tread, but feel able to do so when the path forward has been beaten down for them.

We shall now pray that more follow behind the efforts of the National Coalition to Prevent an Iranian Nuclear Weapon. I don’t endorse this group, as I find they have no interest on doing the same with Israel. They are not anti-nuke, but for maintaining the hegemony of the only one that does have them – a policy that Gordon and I would love to debate them on … Jim W. Dean ]

Well the gloves have certainly come off now. No former top security government official has even made such damning statements about a sitting president as ex-CIA head John Brennan did last week. And this was not a Trump-style off-the-cuff tweet, but an MSNBC feature news interview.

Brennan would have certainly prepped his own kitchen cabinet for feedback before taking such a major step. The unsaid was that he was literally hanging a target on Trump, that he must be removed from office as a security risk.

Ex-CIA directors have a small circle they hang out with to discuss current events, so what Brennan said here is not just his opinion. He made this big splash by putting it out so publicly, indicating that there is a following in the US top Intelligence echelons who feel this way.

It comes as no surprise to us at Veterans Today, even though oldtimers in the Intel community from the Cold War days were in shock when Trump won the election, since he had no experience in government, military, or geopolitical affairs.

We assumed he would make up for that by faking it, which he has done all his life, having started by building his real estate business with the help of the New York Italian mob and his “fixer” lawyer, Roy Cohn.

Brennan did not literally call the President a national security risk. Saying that would have undermined his point, making him look vindictive. Sometimes you can have more impact with the public by taking them 98% of the way there, and letting them figure out the last two percent.

There are many Republicans in Congress who feel exactly the same way, but have to bite their tongue to maintain their fragile hold on majority power, with the Democrats eager to begin regaining control in the midterm elections, and where Trump and his chaos problems might possibly help them.

Brennan and his fellow sympathizers have been careful in their timing to make such a criticism of a sitting president. If anything, they are experienced at knowing when to strike when it can have the most effect.

And Trump was on one hell of a roller coaster ride last week. Russia-Gate is morphing into Ivanka-Gate, with Special Prosecutor Mueller’s investigation looking at both daughter Ivanka and her husband Jared Kushner for profiteering off of their White House positions.

The Kushner family has needed to roll over a huge amount of debt on their real estate properties this year, and have $850 million in refinancing deals after meetings said to have taken place in Jared’s office in the White House.

Other presidential relatives have used a White House family relationship to boost their businesses, but not doing it at the White House site. One of the most famous was Lyndon Johnson’s huckster younger brother,, who was a constant problem looking for money and favors all the time.

One night he called the White House to contact Bill Gulley, the military affairs liaison and legendary White House fixer. Sam was having a party on a big yacht in the New York Harbor and wanted the port lights turned off for better mood-lighting. Such was a typical request from the pestering brother.

Gulley had a job where saying no was never an option, so he called the harbor master and, on presidential authority, asked for the lights to be turned off. In the morning, all hell broke loose as it turned out that the yacht was actually one being held in a customs seizure, and it had “escaped” during the night in the blackout, and inquiries were being made as to White House involvement.

It seems LBJ-brother Sam had taken a contract to get the boat out of US jurisdiction to make some quick money and he did. This is not a tall tale, as I have Bill Gulley’s wonderful book in my library.

Mueller got General Flynn to take a plea because Flynn was stupid enough to bring his son in to the influence-peddling business with him from his modest former occupation. Mueller had put a prosecutor on Flynn with a long record of going after family members with felony charges to get the principle to plead.

It did not take long for the dot connectors to suspect that the same route might be happening with the Trump family. There have been more than a few rumors going around that Trump’s aggressive foreign policy has been used to shake down a number of foreign entities.

They would include those looking to buy weapons technology and nuclear technology, or whoever might think it was a good idea to partner with the Trump sons in large real estate business deals. Saudi Arabia rolled out the carpet not only for Trump, but also for Ivanka.

The flip side of that is when funding the right business deals might get Daddy Trump off someone’s back. More than a few people think Trump would not be above this, thinking that with all the presidential power at his disposal, no one could lay a glove on him.

But the irony in this story is what we say in the southern US, “the pot calling the kettle black”. While many of us would agree that Trump is certainly a national security risk, Brennan is not squeaky clean by any means. He was a national security risk to millions of innocent civilians for his overseeing much of the US proxy terror war, where the CIA was in it up to its eyeballs.

The arms running is well known within the community and even documented, particularly the Soviet-era arms that came out of the Balkans, and especially from Ukraine where everything was for sale.

Who is Logistically Supporting Terrorism Efforts?

Many describe what Obama and Brennan inflicted upon the world as an ongoing 9-11, with victim countries that could only wish they had just 3000 dead.

Vietnam Veterans who served honorably, even if unhappily, are appalled at what they are seeing now in America’s forays abroad, to the point where they don’t encourage young family members to go into the military.

For instance, in Iraq and Syria, the US military handled the logistics work supporting the terrorists, which provided cover for the US moving forces into both countries to fight the same terrorism that it and the Gulf States had created.

The military people who did the dirty work in these wars have a big surprise waiting for them, as older veterans fully aware of what they did are not going to be honoring them for aiding and abetting a terror proxy war.

Yet, these people will probably not care, as we see them eventually going into the private contract mercenary business that is growing, and laughing all the way to the bank with the big money to be made there. It is an industry known for being able to create work when business is slow. We are seeing multi- national corporations, even the big tech companies, building their own paramilitary branches, like Google for example.

All this silly aggressiveness has many traditional security senior people concerned about the lack of accountability. The public seems to not care a bit as long as their family members don’t come home in body bags. No politician is running for office with a platform of standing against the US using proxy terrorism as a regime-change tool.

The US has openly declared that, in pursuit of its unipolar, full-spectrum global dominance plans, no previous agreements that it has signed will impede its goals. It has gone from the fairy tale of spreading freedom and democracy to “join the team or be put on the target list”. However, that does not give me a warm fuzzy patriotic feeling in my tummy.

I am embarrassed by these deceptive foreign policies, as I come from an old military family going back to the American Revolution, with many honored with burial in national cemeteries; and I recently buried my mother in Arlington National Cemetery.

Mother was a WWII widow at 16 years, and is now buried 100 yards away from my brother, an Army Ranger Colonel, who died of Agent Orange exposure complications in 2005, from his one year in the Vietnam Conflict. We never wanted to be a part of the nonsense we are seeing play out on the current geopolitical stage.