The Wall Street Journal has spilled the beans by reporting that Jared Kushner played a central role in bringing in Neocon hotheads like John Bolton in the White House.

“In talking with friends,” the Wall Street Journal reported, “Mr. Kushner has joked about the hawkish Middle East views of Mr. Bolton, who has said he opposes a two-state solution for achieving peace in the region in favor of Egypt and Jordan absorbing the Palestinian territories.”[1]

Kushner played a central role in the firing of Rex Tillerson, who, as the Journal put it, “was unhappy about what he considered to be Mr. Kushner’s freelancing: straying into foreign-policy matters that are the State Department’s realm.”[2]

One can understand why Tillerson did not belong to Kushner’s ideological orbit. Tillerson wanted to preserve the Iran deal. He said last year:

The Iran deal was fair, reasonable and defensible. Tillerson had every right to defend it, and some even gave him credit for doing so.[4] Kushner, as a representative of the Israeli regime and the Neocon ideology in the White House, wasn’t going to buy it. That obviously was one reason why he helped fire Tillerson. Trump proved that point. He declared:

“Rex and I have been talking about this for a long time. We got along, actually, quite well but we disagreed on things. When you look at the Iran deal; I think it’s terrible, I guess he thought it was OK. I wanted to either break it or do something and he felt a little bit differently.”[5]

Bolton, as we have argued elsewhere, is one of the worst political whores and prostitutes to ever walk on the political platform. His bosses are essentially in Israel. Former UN ambassador Dan Gillerman declared when Bolton was in the White House during the Bush administration:

“John Bolton got in touch with me, calling to say, ‘You have to call your prime minister and tell him that Condi Rice sold you out to the French.’”[6] 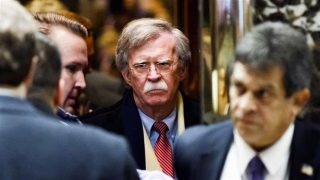 Bolton was so bad that Jimmy Carter had nothing good to say about him. In fact, Carter solemnly warned:

“Maybe one of the worst mistakes that President Trump has made since he’s been in office is his employment of John Bolton, who has been advocating a war with North Korea for a long time and even an attack on Iran, and who has been one of the leading figures in orchestrating the decision to invade Iraq. A disaster for our country.”[7]

Carter rightly said that his first advice to Trump would be that he needs to “fire John Bolton.” Why? Again Bolton is a complete mess. Take it from the Spokesman Review:

“Ford described how Bolton tried to bully, intimidate and fire an analyst after he refused to sign off on a speech asserting that Cuba had biological weapons, a conclusion unsupported by intelligence. Never mind that twisting supposedly policy-free intelligence is downright dangerous for America. It was Bolton’s way or the highway.

“In another incident, a former government contractor testified that in 1994, Bolton threw a tape dispenser at her, made offensive comments about her weight, shouted threats, chased her down a Moscow hotel hallway, pounded on her door and ‘generally behave(d) like a madman.’”[8]

While Bolton is still advocating for more wars in the Middle East, schools in Colorado are trying to have a four-day school week “because of funding issues.” For Bolton, educating the next generation in America isn’t really as important as killing innocent men, women and children in the Middle East. In other words, Israeli ideology should always come first; America is just an afterthought.

So Carter is right: in order for political progress to take place, Bolton needs to be fired. To be quite blunt, someone needs to “drain the swamp” in the White House.