The biggest story this week broke just a few hours too late to be included in yesterday’s False Flag Weekly News: On the 50th anniversary of the assassination of Dr. Martin Luther King Jr., The Washington Post, tied with the New York Times as America’s newspaper of record, broke the media blackout on the Deep State operation that killed Dr. King. 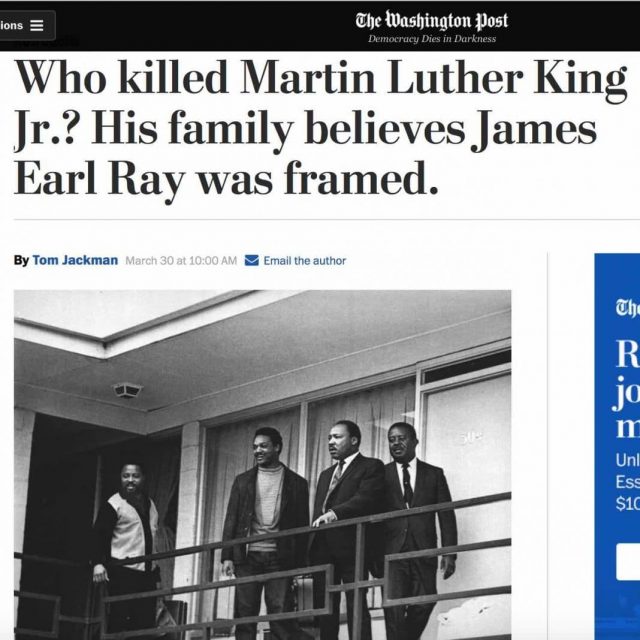 Will the Washington Post, whose motto is “democracy dies in darkness,” commit significant investigative resources to verifying the facts uncovered by King family attorney Dr. William Pepper? Or will they let sleeping dogs lie and let Jackman’s story serve as a limited hang-out, giving the MSM plausible deniability to obfuscate its participation in the 50-year-old cover-up (and the cover-ups of other SCADS including the Kennedy assassinations and 9/11)?

The media dikes holding back oceans of truth are beginning to burst. The day after WaPo re-opened the MLK investigation, a jury found Omar Mateen’s widow Noor Salman “not guilty” of conspiring with her husband to shoot up the Pulse Nightclub, where the gay Mateen was a regular. The verdict was presumably driven by a last-minute revelation that the government had concealed its knowledge that Mateen’s father Seddique Mateen, a CIA-linked Afghan, was also a longtime FBI asset. Worse, the FBI covered up its knowledge that Seddique Mateen had engaged in suspicious money transfers (of Deep State cash rewards from his handlers?) to Afghanistan and Turkey during the run-up to the attack. Keeping in mind that suspected false flag patsy Omar Mateen worked for G4S a.k.a. Wackenhut, whose specialty is “jobs too dirty even for the CIA,” it seems that Noor Salman’s defense, and the jury, figured out that Salman was being scapegoated to cover up yet another Deep State Gladio B false flag operation.

Another huge “truth is leaking out” story this week was US District Court Judge George Daniels’ decision that Saudi Arabia must face lawsuits over its role in the 9/11 attacks. Though the Saudi role was limited to supplying “hijacker” patsies to be falsely blamed for the 9/11 operation, the ongoing lawsuit will give the Saudis a chance to defend themselves by proving that there were in fact no hijackings on 9/11 and that none of the 19 patsies was even on board any of the alleged attack planes.

Another false flag on the verge of MSM exposure this week is the Las Vegas shooting. The Los Angeles Times, which has done good work exposing the Las Vegas Police and FBI coverup, pointed out that there are Nearly 750 hours of video and 2,000 calls to 911 in Vegas shooting. Almost all of it remains unseen and unheard.

And then there is the ongoing exposure of the Trump-Kosher Nostra ties discussed in VT, as well as by Wayne Madsen and others. Will this scandal take Trump down before he can launch the Kushner-Bibi war on Iran? When will the MSM go beyond Trump-Russia and expose the real issue, Trump-Israel?

Newsweek, like WaPo owned by Jeff Bezos, exposed another Deep State scandal this week: U.S. CREATED ISIS TO DISTRACT WORLD FROM ISRAEL, IRAN SAYS  Has Bezos taken the red pill, and offered a supply to his stable of journalists?!

If the truth leaks keep gushing like this, maybe some day MSM journalists will all start doing their jobs, and my role at False Flag Weekly News will become obsolete. (Not an unwelcome prospect!) But given the MSM’s past record, I’m not exactly holding my breath.