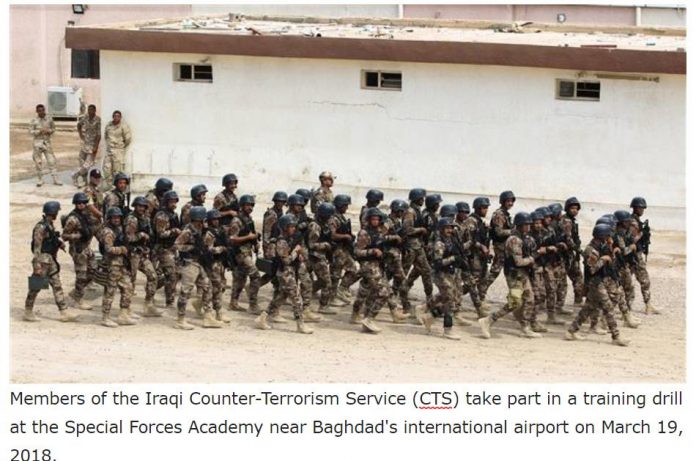 Iraqi security forces have launched a counter-terrorism in the desert region of the western province of Anbar, and killed a high-ranking member of Daesh Takfiri militant group as government troops and allied fighters from Popular Mobilization Unions are purging the country of the last remnants of the terror outfit.

Intelligence sources, speaking on condition of anonymity, told Arabic-language al-Sumaria television network the top-brass militants, identified by the nom de guerre Abu Taha al-Tunisi, was killed along with nine companions during an offensive.

Al-Tunisi was notorious for carrying out acts of beheading and mass killings, and therefore known as “Daesh butcher.”

The development came a day after Iraqi Interior Ministry spokesman, Brigadier General Saad Maan, announced in a statement that police forces had arrested nearly a dozen Daesh remnants during an operation in the eastern flank of the strategic northern city of Mosul, located some 400 kilometers (250 miles) north of the capital Baghdad.

Maan said the operation was launched in Tal Roman district, and 11 Takfiris, whom arrest warrants had previously been issued for, were detained as a result.

On December 9, 2017, Iraq’s Prime Minister Haider al-Abadi declared the end of military operations against the Daesh terrorist group in the Arab country.

“Our forces are in complete control of the Iraqi-Syrian border and I therefore announce the end of the war against Daesh,” Abadi told a conference in Baghdad then.

On October 5, Abadi said Iraqi armed forces had liberated Hawijah, driving Daesh Takfiris out of their last bastion in the oil-rich northern province of Kirkuk.

On July 10, Abadi formally declared victory over Daesh extremists in Mosul, which served as the terrorists’ main urban stronghold in the conflict-ridden Arab country.

In the run-up to Mosul’s liberation, Iraqi army soldiers and volunteer Hashd al-Sha’abi fighters had made sweeping gains against Daesh.

The Iraqi forces took control of eastern Mosul in January 2017 after 100 days of fighting, and launched the battle in the west on February 19 last year.