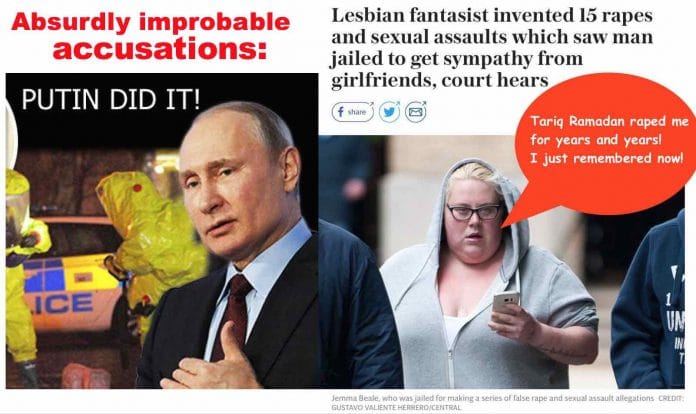 Author’s note: Former “Post Office employee” Gordon Duff has reminded me of two facts that need to be stressed: (1) Nobody EVER murders their swapped spies—never happened, never will. It would put one’s own swapped spies in danger, and destroy one’s credibility. (2) Nerve gas either kills you quickly, or you quickly and fully recover. “Long term hospitalization for nerve gas” makes no sense.  -KB

If the Brits had chosen today to launch their “Putin poisoned Skripal” claim, everyone would have assumed it was an April Fool’s joke. As The Saker writes in his latest piece:

Does anybody sincerely believe that “Putin” (the collective name for the Russian Mordor) really attempted to kill a man “Putin” himself had released in the past, who presented no interest for Russia whatsoever who, like Berezovsky, wanted to return back to Russia, and that to do the deed “Putin” used a binary nerve agent?

The answer, of course, is that “not a single major western decision maker sincerely believes any of that nonsense.” Even New York Times readers are not quite that stupid/brainwashed, which is why America’s newspaper of record had to publish a piece admitting that obviously Putin didn’t do it, but that it was his fault anyway because the killers must have been Putin’s “activists and proxies” who “set out independently, trying to do what they think would please Mr. Putin.” (These activist proxies must be both geniuses at obtaining or whipping up obscure forms of nerve gas, and idiots who think that handing the neocons a pretext for an anti-Russia demonization campaign by killing a harmless swapped spy in a way meant to implicate Russia would “please Mr. Putin.”)

The accusation against Putin (or his alleged activist proxies) is self-evidently absurd. But that hasn’t lessened its effectiveness. Again quoting the Saker:

“Let’s look at the situation just a few months ago. The US was defeated in Syria, ridiculed in the DPRK, Trump was hated in Europe, the Russians and the Germans were working on North Stream, the British leaders forced to at least pretend to work on Brexit, the entire “Ukrainian” project had faceplanted, the sanctions against Russia had failed, Putin was more popular than ever and the hysterical anti-Trump campaign was still in full swing inside the USA. The next move by the AngloZionist elites was nothing short of brilliant: by organizing a really crude false flag in the UK the Empire achieved the following results:

“This is an ambitious plan and, barring an unexpected development, it sure looks like it might work.”

How can a self-evidently absurd accusation be so effective? A good place to start is Hitler’s famous notion of the “big lie”:

“…in the big lie there is always a certain force of credibility; because the broad masses of a nation are always more easily corrupted in the deeper strata of their emotional nature than consciously or voluntarily; and thus in the primitive simplicity of their minds they more readily fall victims to the big lie than the small lie, since they themselves often tell small lies in little matters but would be ashamed to resort to large-scale falsehoods.

“It would never come into their heads to fabricate colossal untruths, and they would not believe that others could have the impudence to distort the truth so infamously. Even though the facts which prove this to be so may be brought clearly to their minds, they will still doubt and waver and will continue to think that there may be some other explanation.”

An absurdly implausible accusation, like the Skripal claim, short-circuits rational thought. It works on “the deeper strata of their emotional nature.” Emotionally, people have been conditioned to FEEL (not think) that Putin is bad. Poisoning people with nerve gas is also bad. Therefore bad, bad Putin (or his bad, bad agents) must have done the bad, bad deed.

Let’s look at some other absurdly improbable accusations that have worked, at least for awhile. Consider the poster girl for false rape accusations, Jemma Beale. As the London Telegraph reported:

A fantasist who invented rape and sexual assault allegations against 15 men to get attention from her girlfriend has been jailed for ten years. Jemma Beale, 25, claimed she had been raped by nine men and seriously sexually (sic) by six in four different encounters over the space of three years, causing one man to be wrongly jailed. 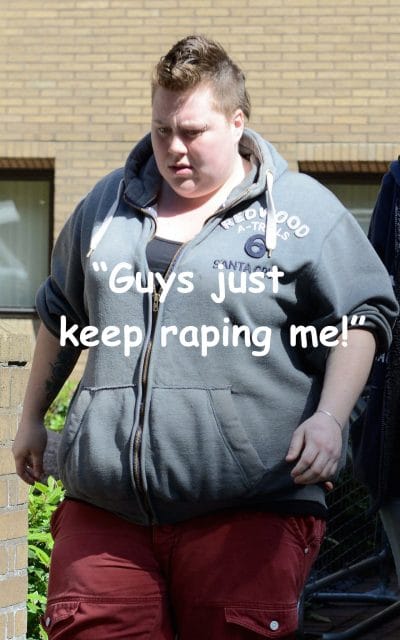 Jemma Beale’s stories, especially the second, third, and fourth, cannot have been terribly plausible. Yet the police and courts kept on believing her…for years.

“She claimed she was groped by a complete stranger, Noam Shahzad, in a pub in Hounslow, west London, in July 2012, before he took part in a vicious gang rape on her in the car park of a nearby medical centre. CCTV later showed that Beale had attacked him in the pub before walking home alone. Forensic tests also showed she had cut herself with a hanging flower basket to make it look like she had been attacked with barbed wire. Mr Shahzad skipped bail and fled the country after being charged with sexual assault.”

Maybe the cops should have looked at the CCTV footage (or the person making the accusation) before jumping to conclusions. As with Putin-Skripal, emotional conditioning—”women good men bad,” “homosexuals good Muslims bad” and so on—apparently short-circuited rational thought, leading police, courts, and the public to believe Beale’s increasingly preposterous accusations.

Essentially the same thing is happening in France right now, as Oxford professor Tariq Ramadan, Europe’s leading voice of moderate Islam, has been imprisoned and abused based on stories from accusers that appear to be even more self-evidently absurd than those of Jemma Beale.

For the details, listen to my interview with Dr. Sami al-Arian, and read Alain Gabon’s article “The Tariq Ramadan Case: A Comprehensive Review.” Briefly, these accusers claim, without any evidence whatsoever, that they were repeatedly raped, in one case over a full year and a half, and kept coming back for more:

“At no point were the judges interested in some frankly surprising declarations by alleged victims Henda Ayari and ‘Christelle’—especially their own admissions (reiterated to the press and now proven further by documentation including e-mails) that long after the alleged rapes, they pursued Ramadan with great insistence on Facebook. They also traveled from conference to conference seeking encounters with Ramadan.”

In other words, the accusers fanatically and fruitlessly stalked the man they claimed was terrorizing them. Does this scenario remind you of Jemma Beale assaulting a guy in the pub, then making up a horrific rape story?

One of Ramadan’s accusers claims he tortured her in a hotel room then casually left to give a lecture. According to the accuser, she waited in the room for Ramadan to return and rape her. The implausibility of such a story is as grotesque as Jemma Beale’s fantasies.

But just as the Skripal poisoning story fits the “bad, bad Putin vs. goodie-two-shoes West” grand narrative, and Jemma Beale’s rape fantasies fit the “bad, bad Muslim immigrants vs. good homosexuals” grand narrative, in like manner the bizarre tales “coached” by Fourest and Venner fit the prevailing French grand narrative of “bad, bad Muslims vs. sacred French secularism.” The moral: No matter how preposterously insane your lies, you will be believed as long as your flaming BS supports the emotional substructure of the grand récit du jour. In that sense, not much has changed since the witch hunts of a few centuries ago. Obviously Jean-François Lyotard’s famous postmodern obituary for grands récits (grand narratives) was premature.

In conclusion, I would be remiss to end an article on the efficacy of absurdly implausible accusations without mentioning 9/11. Rather than rehashing the details, I will give the last word to my esteemed colleague James Corbett: