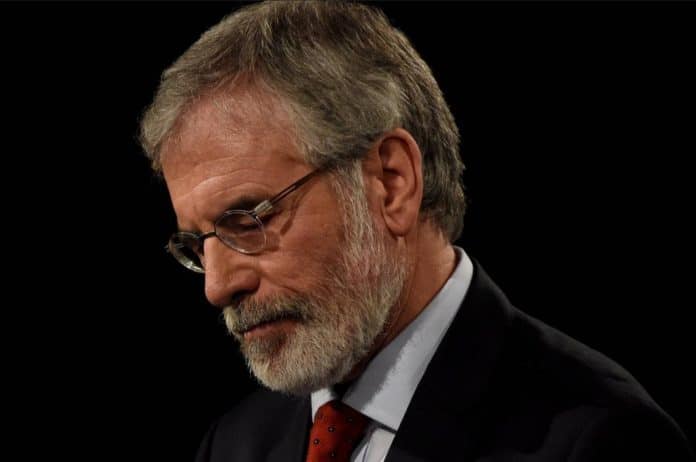 [ Editor’s note:  Outside the US and a few other mob run dictatorships, Israel is considered an apartheid state compared to Nazi Germany.  Terrified of being called an antisemite by the fake Jewish Europeans who are raping the Middle East, too many are silent.

There are almost NO Jewish “semites,” a word describing mostly Arabs.  There is no real history or archeology supporting any biblical crap, the whole thing is wild mythology peddled to the illiterate by the unscrupulous.  Grow up, grow a pair and fight back... Gordon Duff ]

Deputy Adams, who holds a seat in the Irish parliament, hit out at the actions of Israeli security forces during Friday’s ‘Great Return’ protest in Gaza, which left 16 Palestinians dead and more than 1,400 injured.

“There can be no justification or excuse by Israel for the calculated slaughter by Israeli military snipers of unarmed Palestinian protesters on the Gaza border with Israel,” Adams said.

READ MORE: ‘A message to the world that Palestinians didn’t forget their land’ – Hamas official on Gaza clashes

In a strongly worded statement, the Republican politician labeled the treatment of the Palestinians by Israel “a dark stain on the reputation of the international community” and urged both the European Union and the United Nations to involve themselves in the peace process.

“I am urging the EU and the UN to take a stand against Israeli violence. I would especially urge the Irish government to expel the Israeli ambassador as a first step in formally and officially recognizing the state of Palestine. The time for excuses is long over,” Adams said.

Adams formed part of the Sinn Fein leadership that negotiated the Good Friday Agreement in 1998. The groundbreaking deal helped establish a power-sharing executive between loyalist and nationalist political groups in Northern Ireland. The agreement is seen as a potential blueprint for peace in other trouble spots around the globe.

“The Irish government has an opportunity to give leadership on this issue to the international community by taking decisive decisions that reflect the widespread abhorrence of Israeli actions by the Irish people and by acting in solidarity with the Palestinian victims of Israeli aggression,” the statement concluded.

Violence erupted on Friday as thousands of Palestinians took part in a march to mark Land Day, a historical show of opposition towards Israeli settlement in the region. The protest turned violent along the border with Gaza with Israeli troops using live fire, rubber-coated bullets and tear gas to disperse crowds that had flocked to the border fence.

READ MORE: ‘There would be no killings if Hamas told protesters to stay away from border’– Israeli PM spokesman

A spokesman for Benjamin Netanyahu told RT that the deaths were the fault of Hamas. David Keyes, the Israeli prime minister’s foreign media chief, said the protests were the “opposite of peaceful.”

“The aim of this event is to swarm into Israel and overwhelm it, and it’s a part of a long track record by Hamas of waging war against Israel, launching tens of thousands of missiles, conducting suicide bombings against cafes, against civilians and in buses,” he said.