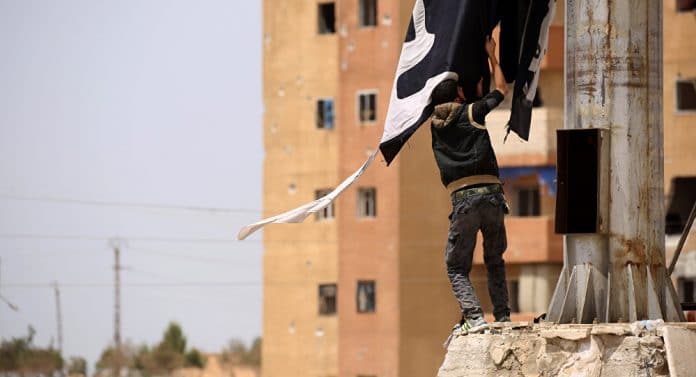 [ Editor’s Note:  Carefully note that Sputnik avoids mentioning that Barrett is an editor at Veterans Today. There is a long story there and not a pretty one as Sputnik gets way too much wrong way too often.  Not this time though …Gordon Duff ]

Sputnik/Moscow: US President Trump had earlier announced that Washington is going to pull out of Syria “very soon” and that “other people” will continue their job, not specifying who exactly. Sputnik has discussed the peculiarities of US foreign policy with Dr. Kevin Barrett, political scientist and Middle East expert.

Sputnik: Russian Foreign Ministry has already started taking action, ordering the expulsion of several diplomats. What will be the immediate fallout of this?

Kevin Barrett: Well, we are living in the time of chaos and it is really mainly the result of the neo-conservatives, who have been in power one way or another since their coup d’etat here in the United States on September 11, 2001.

They believe in transforming the world through chaos. Some of them are former Trotskyites actually. And they believe that the interests of Israel are served by destabilizing the Middle East. That’s underlying reality that has been driving the less than rational US policies during the past decade and a half.

READ MORE: Fight Against Daesh at Stake: US vs. Turkey in Syria’s Manbij

Now we have Trump, whose instincts are very much those of a nationalist, who wants to rebuild the US, first and foremost, and is skeptical about American exceptionalism and American Empire and yet he is surrounded by people, Kushner and many others, who are pretty much part of the neo-conservative party.

And I don’t think Trump really has a clear idea of what his program is, what he wants to accomplish. But this has led to the kind of situation we just saw where Trump said we are getting out of Syria very soon and the rest of the American establishment immediately in a panicked way tried to contradict him, right in the middle of this crisis with Russia, with the diplomatic expulsions and the absurd allegations of poisoning that led to all of this. […]

Sputnik: It seems that Trump’s statement contradicted a lot of the statements that were made by other top US officials, including Rex Tillerson, who is no longer a top official. What can you make of the fact that his statement contradicts and who should we be listening to when we try to understand what the US policy will be on keeping troops in Syria?

Kevin Barrett: I wish I could say we should take Trump at his word. Unfortunately there are many reasons why that’s not the case. We do have an extensible system here in which the president is the commander-in-chief and as Harry Truman said “the buck stops here,” so theoretically, if Trump were to order withdrawal from Syria, it would happen.

READ MORE: Trump: US to Leave Syria ‘Very Soon’ to Let Others Take Care of It

However, unfortunately, he have seen the encroachment of the “deep state”, which is linked to the military industrial complex and a complex of the intelligence community, the national security council, organizations like the Council on Foreign Relations and so on.

We have these mechanisms of elite guidance of the US policy and the US policy has gone off the rails, because, as I said the neo-conservatives and some others, who have been convinced to go along with that party line, have taken it off the rails. […]

Sputnik: How would you define the end-goal of the US in Syria? Is it just to oust Daesh* and other like organizations or militants or is there something else that US is hoping to achieve in Syria?

Kevin Barrett: No. The US is not fighting an honest war on terror in any way, shape or form. This is simply the ideological excuse for imperial meddling. In fact, the US largely created Daesh, just as it created Al-Qaeda* back in the days of the Soviet Union in war in Afghanistan.

Daesh was yearned for openly in international security council document saying that our allies and us were hoping to see the emergence of Salafist principality in Iraq and Syria.

READ MORE: US, France May Have Reached Responsibilities Transfer Deal in Syria — Academic

That smoking gun document, released by WikiLeaks, shows that well before Daesh emerged in its current form that the US policy makers wanted it to and al-Baghdadi spent a lot of time in US prison camp, presumably being trained.

He had to run of the camp. He was organizing Daesh while he was there in the camp. Then they have lied he was there only for year, he was actually held under US custody for close to five years, according to numerous witnesses.