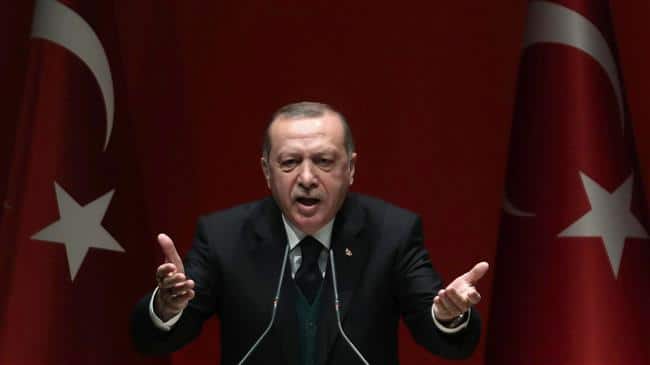 [ Editor’s Note: Erdogan might be painting himself into a corner by going after Israel as an occupier. He has effectively occupied NW Syria for some time, using Turkmen minority militias as cover, to which Turkish army and special forces were added as needed, simply by changing uniforms.

Turkey has prosecuted journalists who have exposed its providing arms, ammo and equipment to both Syrian insurgents and terrorists, and yes, running training camps for them inside Syria.

The refugee camps in Turkey were a steady source of supply for Free Syrian Army manpower, people who also changed uniforms as needed based on better pay offers or deals they could not turn down, like “Join us or we will wipe you out.” And yes, they handed over their TOW missiles, or sold them, when they changed sides.

Erdogan has said all the right things about supporting Syria’s territorial sovereignty, but does not seek Damascus’ permission to move its forces in. The magic fairy dust trick is to simply say “anti-terrorist operation” and it seems you can do whatever you want if you have the military muscle to do so … Jim W. Dean ]

“Hey Netanyahu! You are occupier. And it is as an occupier that you are on those lands. At the same time, you are a terrorist,” Erdogan said in a televised speech in Adana, southern Turkey, on Sunday.

He added that what Israel does to the “oppressed” Palestinian people “will be part of history and we will never forget it.”

“We are not guilty of any act of occupation,” Erdogan said. [Editor’s note: Erdogan has been occupying NE Syria with Turkman, FSA and terrorist proxies whom he has continually supplied, just as the US had done with the Kurds and ISIS, the US-controlled part that just puts on PDF or YPG informs when needed to take over Syrian oil and gas fields with US air cover…Jim W. Dean ]

On Friday, at least 17 Palestinians lost their lives and more than 1,400 others sustained injuries when Israeli military forces opened fire on thousands of protesters who had flocked to a sit-in near the Gaza border.