Sadly, there are more reports of the massacring of innocent Afghan civilians. Bilal and Bashir’s mother prepared her boys’ new white clothes for their graduation at the school in the Dasht-e-Archi District in Kunduz Province. They were too young and did not know how to wear their turban hats.

They were under ten years old. She sent them to school. Soon after she heard the planes and the bombing. Her boys’ white clothes were red with blood when her boys were returned to her on Monday, April 2, 2018. The boys’ grandfather was killed by the Soviet invaders in the 1980s.

Those responsible for these war crimes must be prosecuted in lawful tribunals. There must be justice for Bilal and Bashir and the thousands of Afghan villagers killed by the U.S. and its agents in this illegal war and occupation. Afghan/Pashtun lives matter. 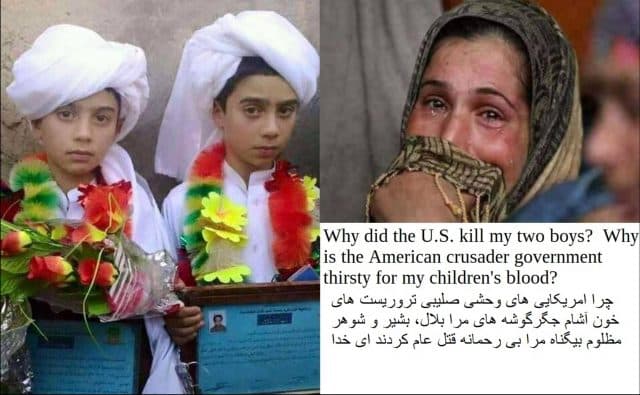 On April 2, 2018, the U.S. bombed a school in the Dasht-e-Archi District in Kunduz Province and civilian homes killing 250 Afghan/Pashtun children/students, teachers and villagers. These war crimes are occurring everyday in Afghan/Pashtun villages.

On February 24, 2018 the U.S. and its agents bombed a school and civilian homes in the village, Bala Buluk, Gang Abad, Farah Province killing 10 civilians including children. On November 20, 2017, Afghan villagers reported that 21 students, many children, were massacred by U.S. special operation forces along with forces from the Afghan Puppet Administration in Maidan Wardak Province.

These villagers also reported that the teachers at this religious school were seized by these forces. On November 21, 2017, it has also been reported that many Afghan villagers/civilians were killed in by U.S. bombs in the Districts of Musa Qala and Dishu, and many other locations in Helmand Province.

The majority of these bombings are all occurring in Helmand Province, where the known vast deposits of Rare Earth Elements (REEs) are located. These Afghan villagers are seen as the only resistance to the control and exploitation of the REEs by the United States and the war profiteers.

Although U.S. General Niocholson tells the media and the American people that these are drug labs that the U.S. is bombing, it is really about the control of the REEs and not terrorism. The United States just continues to hide the facts. The innocent Afghan villagers continue to suffer. 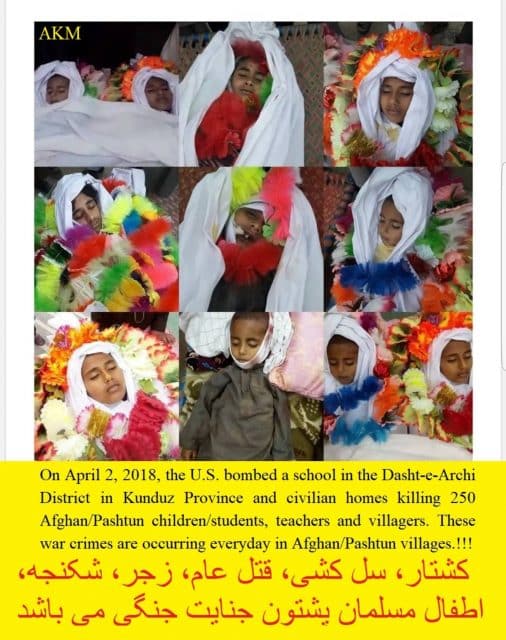 The United States is bombarding the Afghan villages, innocent civilians, using uranium -tipped weaponry, illegal bombs with radioactive materials and other new types of bombs and weaponry. With Russia and Iran still in Syria supporting the criminal dictator, Asad, the United States has lost and cannot defeat him. It cannot win there.

The war mongering U.S. generals are moving the troops into Afghanistan and focusing their anger and revenge onto the Afghan villagers, because they along with Trump so desperately want to win. Everyday the United States, NATO, its mercenaries, and its selected Afghan administration puppet have shown that they cannot fight the Afghan villagers on the ground.

When the U.S. forces lose the battle on the ground they bombard the Afghan villages. In November 2017 one day in Kunduz Province, in Chardara District, the U.S. and its cohorts dropped 216 bombs on villagers destroying 46 villages. Please see the attached videos, which have been posted on Facebook by Afghan villagers documenting these crimes. 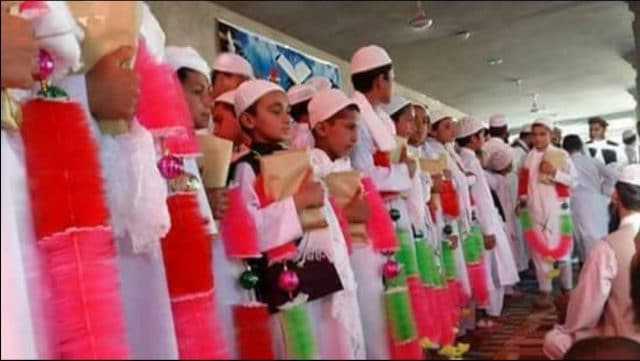 I believe the new U.S. Trump strategy in Afghanistan is genocide- the intentional killing of the Afghan/Pashtun villagers, who are the only roadblock to the Trump administration’s exploitation of the Rare Earth Elements (REEs).

At one of his media events in the fall of 2017, Trump himself boldly stated that he wanted the United States to “exploit” the REEs His friends, Michael N. Silver of American Elements, a company that specializes in mining REEs and his adviser, billionaire friend, Stephen A. Feinberg of Dyncorp will benefit from this exploitation. 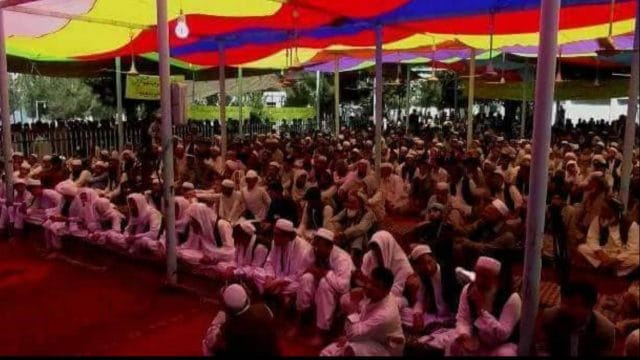 The United States under the command of Trump and ultimately under the command on the ground of General Nicholson is cowardly attacking the Afghan/Pashtun villagers using phosphorus and other chemical bombs against them. On August 28, 2017, thirty five (35) Afghan villagers, many women and children, were killed in Shindand District in Herat Province.

This killing of Afghan villagers/civilians is happening throughout Afghanistan every day-mostly unreported by the media. It is escalating under Trump’s new strategy of genocide of the Afghan /Pashtun villagers, who are the road block to his exploitation of Afghanistan’s mineral wealth. 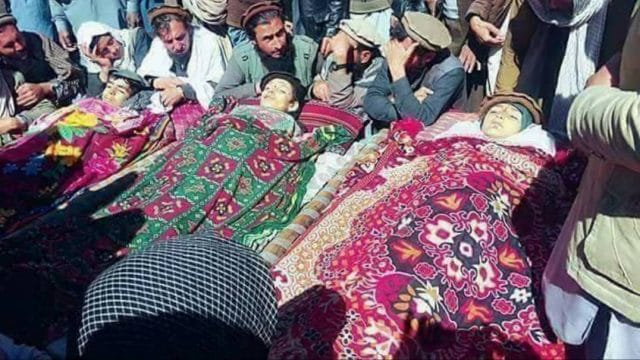 This illegal targeting, bombardment and killing of Afghan villagers children needs to stop. Those responsible for these war crimes must be indicted and prosecuted in lawful tribunals. 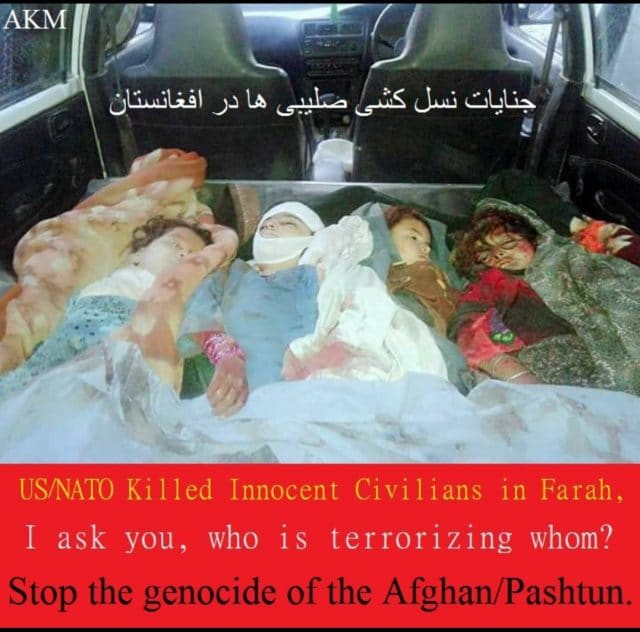 Peace not war is the answer. Sincere talks not bombs dropped on Afghan villages is the path to peace. If there ever will be any peace or peace process in Afghanistan the United Nations does not need to be involved.

These past seventeen years have shown that the UN is a puppet on U.S. string. I realized this earlier in my journey for peace. On September 30, 2012, while I was in Afghanistan when I met with Dr. Talatbek Masadykov, Director of Political Affairs for UNAMA (United Nations Assistance Mission in Afghanistan), he told me that his agency cannot do anything without the United States’ approval.

Now, the UN is watching as the Trump administration escalates its war crimes against the Afghan Pashtun villagers. It did nothing about the mother of all bombs being dropped on the Achin District or the current massacring of Afghan Pashtun villagers in the Helmand Province and other Pashtun areas. The United Nations has no business to speak on behalf of the Afghan villagers about peace when its inaction and actions show otherwise.

The UN Security Council is the voice of the United States, other superpowers and the war profiteers. Only after Trump learned from the Pentagon about Afghanistan’s rare earth elements (REEs) deposits worth trillions did he decide to stay in Afghanistan- a war the U.S. has lost.

Now, while the U.S. under the Trump Administration and NATO escalate the war against and the massacring of Afghan/Pashtun villagers in Helmand and other mainly Pashtun areas where the super majority of the Rare Earth Elements (REEs) are located, the UN holds a meeting on January 19, 2018 to talk about the future of Afghanistan and peace.

The UN, the superpowers, Afghanistan’s greedy Central Asian neighbors and the Afghan puppets and other war profiteers talk about peace and security, because they want a piece of the REE pie. They all want to exploit the Afghan/Pashtun villagers’ REEs and other mineral wealth. The only roadblock to this successful exploitation is the Afghan Pashtun villagers in the Helmand Province, where almost all of the vast untapped REEs worth trillions are located.

They are fighting to defend their homeland, their families and their mineral wealth from being exploited by superpowers, greedy neighbors, other war profiteers and northern alliance warlords. The Afghan Pashtun villagers are the native, indigenous people of Afghanistan. It is their is their land especially the REE rich Helmand Province. Its all about control over and exploitation of these REEs.

Where is the justice for the Afghan villagers especially Afghan/Pashtun children such as Bilal and Bashir, who are the victims of the U.S. government’s savage war in Afghanistan? Why isn’t the western media reporting on these war crimes?

I may be reached at (269) 353-7044. I hope your newspaper starts reporting on these war crimes being committed in Afghanistan by the United States. The American people need to know what is truly happening in Afghanistan. Thank you.

Please see the attached photos and videos of an Afghan children and villagers who were killed for REEs. How shameful!