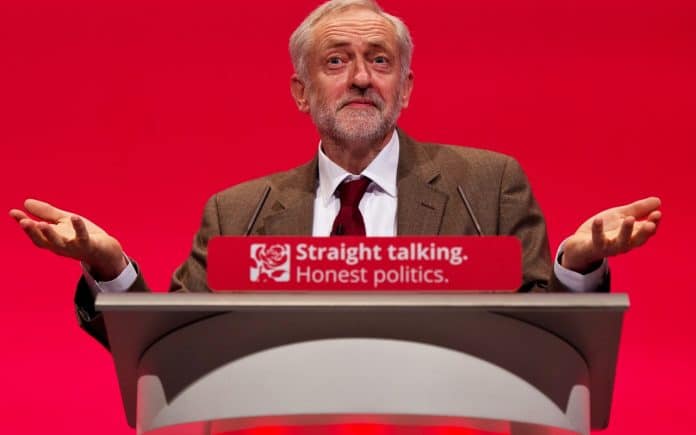 [ Editor’s Note: This incredibly cheap shot on Jeremy Corbyn by the Jewish KKK equivalent may signal that it is time to call Jewish political terrorism for what it is, nothing more than a modern form of lynching. ISIS also believes in terrorizing all non-believers.

But one must pick the timing of such an event carefully, and the Passover Seder group dinner that he attended with his constituents has provided such with their standing up to the Jewish hatemongers (defined as anyone who disagrees with the Jewish lobby on anything) by denouncing the anti-Semitic smear lynching attempted on Corbyn.

Corbyn is standing on the shoulders of these righteous Jews so his neck did not get stretched. It is time now to rethink and re-tag which groups are really a disservice to Judaism, the extremists of course, who are similar in their thinking to the Saudi Wahhabis, who feel that all non-believers should be put to the sword or enslaved.

The political support that these extremists Jews have created for themselves has never been revealed for what it is, an election rigging effort at its core, that all power structures should be made to support a “Jewish agenda”, and anyone objecting punished, with all tools available, including cheap smears.

The timing of this attack is obvious, as we know Corbyn will support an independent investigation of the latest slaughter of unarmed Gazans protestors. So the Jewish terrorists are trying to make an example of Corbyn, as their strangle hold on British politics is something they want to maintain by beheading Corbyn as Labor leader.

The Jewish Lobby has its fingers into the Labor Party, also, and those hounds were let loose under the guise of fighting anti-Semitism in Britian when such a claim is a bad joke. This is all about knocking off anyone politically not with the Israeli Lobby … Jim W. Dean ]

After having anti-Semitic accusations hurled at him, Jeremy Corbyn is now being slammed for spending time with Jews. He attended a Passover celebration run by left-wing group Jewdas, copping ire from other Jewish groups and MPs.

Corbyn stopped by the Passover Seder in his home constituency of Islington, and – according to one of the attendees – he stayed for four hours and was an active participant in the event’s rituals. A representative of Corbyn said he had not attended the function in his capacity as Labour leader, but in a personal capacity.

Jewdas last week accused the Jewish Board of Deputies, Jewish Leadership Council and Jewish Labour Movement of“playing a dangerous game with people’s lives” after they took aim at Corbyn, claiming that he supports anti-Semitic values. Jewdas also described last week’s protests against the Labour leader as “faux-outrage greased with hypocrisy and opportunism.”

A Corbyn spokesperson has insisted that the Labour leader has contacted the Jewish groups to set up a meeting to discuss their issues. “He wrote to the Board of Deputies and Jewish Leadership Council last week to ask for an urgent formal meeting to discuss tackling anti-Semitism in the Labour Party and in society,” the spokesman said.

In a piece for the pro-Labour website, LabourList, the party’s youth women’s officer Charlotte Nicols penned an open letter explaining why she was grateful to have Corbyn attend the Passover event.

“Last night, I attended a Seder to celebrate the Jewish festival of Pesach (Passover), held in Islington by a group called Jewdas. Before the fourth cup of wine had even been drunk, a story appeared on the right-wing Guido Fawkes blog, painting those who attended as extremists and the Twittersphere went into meltdown. Why? Because Jeremy Corbyn came to celebrate with us.

“Many of last night’s attendees are absolutely part of the ‘mainstream community.’ It is untrue to say that there is any one narrative, political or otherwise, within Jewdas. It is a collective space where we can have uncomfortable conversations – what unites us all is the fact that we are Jewish,” she said.

“It is not for non-Jewish people, in criticizing Corbyn’s attendance, to determine what is and isn’t a legitimate expression of the Jewish faith. For those in the community who want to paint Jeremy’s attendance as an act of provocation, rather than an attempt to listen, engage, and share our festival with us, it’s actually just alienating many young Jewish people further and validating Jewdas’ very existence.”

Jewish comedians David Baddiel and David Schneider said MPs and others should not immediately dismiss Jewdas as a far-left group.

“‘Boo! Corbyn needs to get out and meets some Jews!’ (Corbyn spends Passover with some Jews at Jewdas) ‘Boo! Not those Jews!'” Schneider added.

Momentum’s Jon Lansman spoke to BBC’s Radio 4 Today, defending Jewdas. “I think this group, unlike other groups you might describe as far-left, fringe, Jewish group, are orthodox, they’re embedded in their synagogues and communities,” he said. “They are part of the community.” Lansman then added: “It was his night off, his office didn’t know he was there.”

The group has come under fire after a Twitter account linked to them, @geoffreyjewdas, described Israel as “a steaming pile of sewage which needs to be properly disposed of” in December last year. The same account tweeted on Tuesday that the Jewdas website has been flooded with traffic, and has crashed as a result.

The Campaign Against Anti-Semitism described Corbyn’s involvement in the Passover meal as “a very clear two-fingered salute at mainstream British Jewry.”

“It is hard to imagine how this duplicitous man can claim to be remedying anti-Semitism within the Labour Party. The party must consider the message that is sent to British Jews and other minorities by him remaining as leader,” it said.

Labour MP and consistent critic of Corbyn, John Woodcock said his attendance at the Passover celebration was “irresponsible and dangerous” and was “deliberately baiting the mainstream Jewish community days after they pleaded with him to tackle anti-Semitism.”

Fellow Labour MP Angela Smith labeled the Labour leader’s attendance “as a blatant dismissal of the case made for tackling antisemitism in Labour.”

The Twitterverse lashed out at Woodcock and Smith, with some slamming them for using the antisemitism row for politician gain.