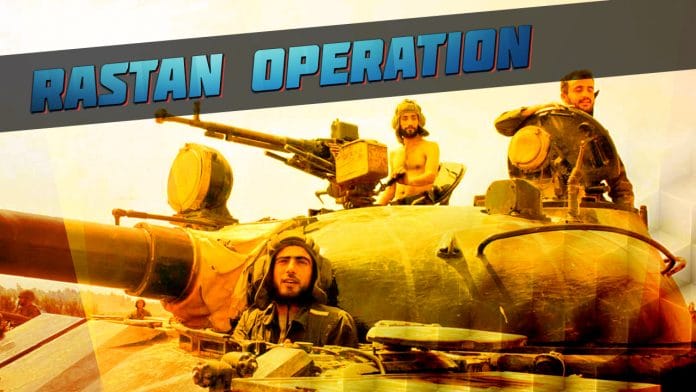 On April 2, government forces established control of the town of Taqsis and the villages of Zour Abu Dardah, Jamaqiliya, al-Mishyah, Imarah in the Rastan pocket in northern Homs. These villages had been controlled by local militants under the influence of Hayat Tahrir al-Sham (formerly Jabhat al-Nusra, the Syrian branch of al-Qaeda). However, the SAA reached an understanding with the locals and was able to enter the area without fighting.

In March, reports repeatedly appeared highlighting the growing tensions between the SAA and local militants in the Rastan pocket. Armed groups had rejected a proposal to reach a full reconciliation agreement and to allow government bodies to operate in the area. In response, the SAA reportedly threatened militants with a direct military action.

With the inevitable liberation of Eastern Ghouta, the Rastan pocket, the Eastern Qalamoun pocket and the Yarmouk Refugee Camp area become obvious targets of the military and diplomatic efforts of the Syrian-Iranian-Russian alliance.

The elimination of these pockets will be an important part of the wider effort aimed at challenging other, much bigger threats to the territorial integrity of Syria.

In Eastern Ghouta, 1,065 militants and their family members were evacuated from the Douma district under a deal between Jaish al-Islam and the Syrian government, the state-run news agency SANA reported on April 2.

According to SANA, these people were evacuated using 20 buses. Their destination is the town of Jarabulus in northern Syria, which is occupied by Turkish forces.

According to some sources, the evacuated persons are former Jaish al-Islam fighters as well as sick and injured people. However, the scale of evacuation indicates that the group’s leadership are just attempting to avoid a public declaration that it has surrendered.

The Iraqi military has plans to launch a cross-border military operation to combat terrorists in Syria, Iraqi Prime Minister Haider Abadi told media during his weekly press conference on April 1.

Currently, the main area of ISIS activity is the Syrian-Iraqi border. Thus, according to some experts, Syrian and Iraqi forces may indeed launch some coordinated effort to end the terrorist group’s presence there.

However, the area north of al-Bukamal is the cause of serious concern. This part of the Euphrates bank is occupied by the US-led coalition through the so-called Syrian Democratic Forces (SDF). Over the last few months, the coalition and the SDF have done very little to combat ISIS there. At the same time, Washington is threatening to attack Syrian forces if the cross the Euphrates River.