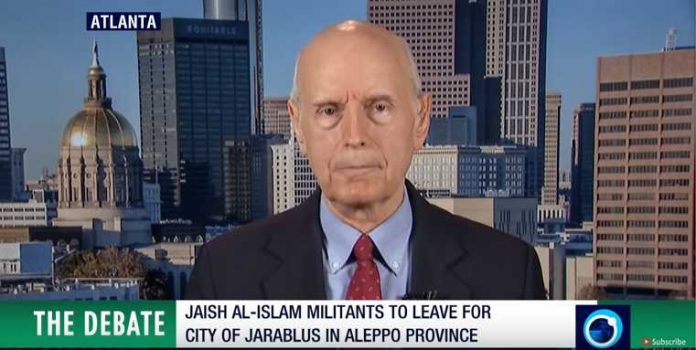 [ Editor’s Note: With as much time as we have put into the East Ghouta battle, it was nice to catch a Debate Show doing a retrospective. I have been on with Jonathan Frye, and he is a solid independent guest.

But it was a challenge getting to the studio as I had a dead battery for the first time, one that had been fine the day before.

Easter Sunday was a good day for the low traffic drive to the studio, but not for catching a cab or even Uber, who could not pick me up until the show was over.

As a last ditch effort, I crashed into the post-church service meeting downstairs (yes, I live over a small local church in Atlanta) and threw myself on the mercy of the court with a $100 incentive to ask someone to drive me over, and the Pastor actually volunteered, after we were not able to get my car’s dead battery jump-started.

Between the studio cost and the satellite uplink, Press TV lays out $1300 or so to book the time, so a guest has to get there any way possible, a throwback to the old “show must go on” mantra.

I got there around nine minutes into the show, and they slid me smoothly in. AAA put in a new six-year battery for me Monday morning, and I will start cranking up the car an hour before show time from now on.

I got to chat with the pastor all the way and had a raspy voice which you will see, but we “got ‘er done”. These Debate Shows are the only news feature that we have. Neither Fox News, CNN, or even NPR has discovered us 🙂 … Jim W. Dean ]

Another victory is on the horizon for the Syrian people and its army. This, as another terrorist group has agreed to be evacuated from Eastern Ghouta.

The Saudi-backed Jaish al Islam militants have agreed to leave Douma in Eastern Ghouta and will pave the way for a more secure capital Damascus, as no longer will terrorists be able to send mortars from this suburb of the capital.