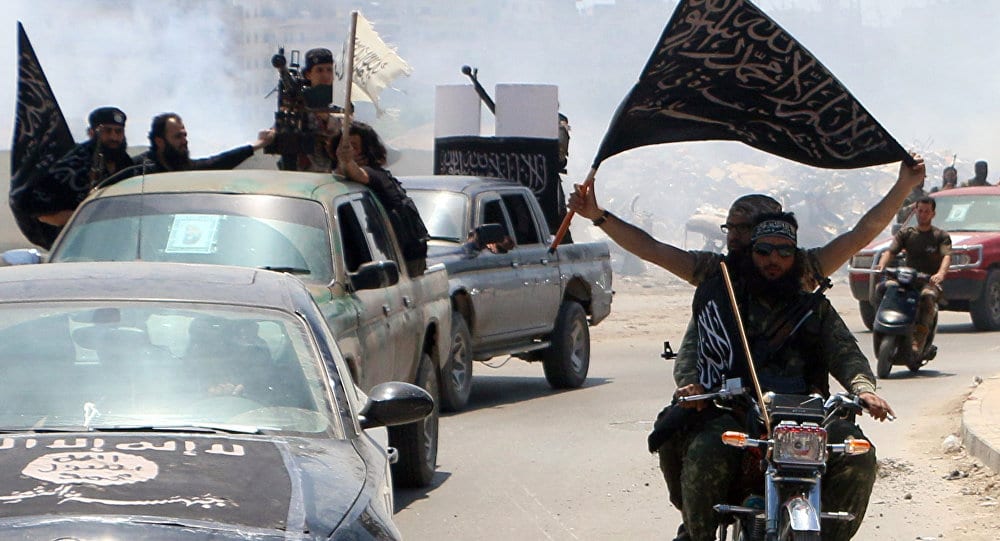 [ Editor’s Note: I don’t quite know what to think about this guy. Roaming around Syria as an independent journalist just screams “spy” to many if not all of the combatants. To be Jewish and roaming around made him even more of a kidnapping target.

Grabbing hostages for ransom was a major and widely known source of income from the jihadis. Captured pro-Damascus people were tortured on the phone with their relatives listening to encourage them to pay up.

On Syrian election day in 2014, the van with my international group of election monitors going up to Homs had two security vans with a half dozen AK-47 wielding soldiers in each one. “Roaming around” was widely discouraged.

If he was an FBI asset, then he has more of a beef. I say that because only assets are “sometimes” promised “rehabilitation” if they are caught and have a bad time. This guy did not get his head chopped off, nor is there a word about ransom demands for him.

If he was really working for the Israelis, then that is another twist. If he was an adventurer looking to gain some notoriety, to score some media when he got home, then he joins a long historical army of those behind him proving that not all turn out to be a Hemingway.

His one initial interview shows the market was already flooded with photos on the Syrian war, despite his 6000 photos, with the Jihadis out publishing everybody, and giving it all away. He should be lucky to be alive, when so many are not. He could have been nailed to a cross.

He has played the victim, even using the aspect of having to pay the State Department back for his flight home. When you are working on your own in a war zone, you do not have the taxpayer tab as your reserve fund. Unless you are on official government business, you do not get a free ride home. He must have known that.

He also was not “bush savvy” enough to have people at home involved in a plan on what to do when he was not in touch with them (or when he was, using code words that it was him), and his account was running down. You give a relative a Power of Attorney to be able to step in and protect your funds. This is not rocket science.

For each guy like this there are dozens that a lot worse happened to that we will never hear anything about. He does not replace them in my book, not hardly … Jim W. Dean ]

Matt Schrier, a US photojournalist who spent over six months in the hands of terrorists in Syria, has concluded that US intelligence agencies milked his situation to try to collect useful information about al-Qaeda plots instead of trying to secure his release and helping him to rehabilitate.

Traveling to Syria in the early days of the civil war, Schrier was captured by al-Nusra Front, al-Qaeda’s franchise in Syria, in late 2012, and spent 210 days in captivity before escaping. During his captivity, his identity, social security number, and bank account information were stolen and used by the terrorists to make purchases of everything from computers and tablets to car parts, sunglasses and cologne.

In an exclusive interview with Fox News’ host Martha MacCallum, Schrier laid out how, instead of helping him, the FBI focused on details of possible new al-Qaeda terror plots gleaned from the purchases made using his accounts. According to the ex-detainee, the intelligence agency stonewalled inquiries from his concerned parents, insisting for almost the entire duration of his captivity that he was the one who made them.

Schrier’s problems didn’t end there, he said. After escaping, returning to the US and beginning the process of trying to rebuild his life, he was unable to obtain credit cards, open new bank accounts or get a lease for an apartment. The FBI offered little assistance, with Schrier’s case manager even suggesting that he temporarily live in a New York City homeless shelter.

The Schrier case was formally the responsibility of then-FBI director Robert Mueller, now serving as special counsel to the Department of Justice investigation into alleged Russian meddling in the 2016 election. In September 2013, the case was handed over to James Comey after he took Mueller’s job as head of the FBI.

But according to Schrier, neither FBI head seemed to show much concern over his predicament, and this is something that deserves public scrutiny. “Not every FBI agent is bad. Some are very good people,” he said. “But the ones that are bad need to be weeded out. And the ones who let them be bad, and who turn their head, need to be exposed,” he added.

Frustrated by the FBI’s indifference to his situation, Schrier stressed that he has “all the evidence,” and has “made one attempt after another to have this investigated so that the people responsible can be held accountable…[Yet] nobody will return my calls, nobody will investigate this, despite all the evidence.”

Insisting that he had given the FBI and the CIA “more information than probably 50 informants could’ve given ’em,” Schrier noted that he deserved a new social security number, decent healthcare, and respect.

“I gave them more than anyone in my situation has ever given them. I can say that definitively. And what I got in return was lies, betrayal, nothing,” he concluded.

The CIA had no comment on Schrier’s case. The FBI told Fox News that its investigation remains open, and that it could not discuss “investigative details surrounding this case.”