Author, Richard Franks sheds light on real war events that occurred while serving in Vietnam in his novel, FLC Legal: The War In Vietnam That Was Never Reported.

The story begins by introducing a band of young trial lawyers, who spent close to a year in training to become Marine Corps infantry officers. Following their training, while serving in Da Nang, Republic of Vietnam, they encountered several trying court cases including a racially inspired grenade throwing where one Marine was killed and 62 were injured.

In the face of adversity, these eight young men did their jobs remarkably well, and all lived to tell the tale about it. 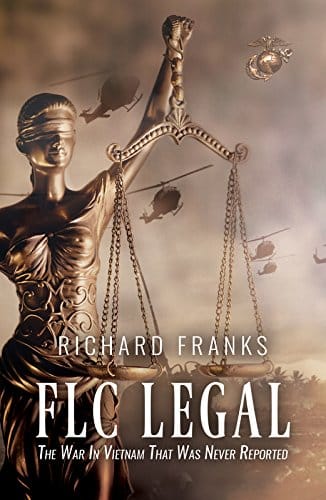 FLC Legal is an inside look at a side of the Vietnam war that most people would believe could not have happened, not to mention, did happen in the US Marine Corps. It tells the story of a band of young trial lawyers, who had also spent nearly a year in training to become Marine Corps infantry officers.

They came together in 1969-70 in Da Nang, Republic of Vietnam. While their lives in Vietnam were punctuated with enemy attacks, none took the war that seriously. However, they took their work very seriously. They were all either prosecutors or defense lawyers, trying court martial cases that ranged from sleeping on post to multiple murders. And they all shared a rich appetite for a good time.

FLC Legal is a firsthand account of several murder trials, a racially inspired grenade throwing, or fragging incident, where one Marine was killed and 62 were injured, the surprise appearance of one of the country’s premier defense lawyers to defend one of the grenade throwers, a poignant story about eight young men who saved their lives by refusing to follow a direct order, Red Ryder and Little Beaver – the sergeant of the guard and his sidekick arresting Marines for sleeping on past, the meat-packer incident – a sodomy case in the Da Nang brig, and black market dealing in American gear.

Filled with information that has not been previously revealed about the Vietnam war, this novel is a fast-paced page turner that will keep the reader captivated from beginning to end.

FLC Legal: The War in Vietnam that was Never Reported, published by Austin Macauley, was released on February 28, 2018. Price: $16.99, ISBN: 9781947353213. It is available in Amazon, Barnes & Noble as well as other bookstores around the country. Official web site: www.austinmacauley.com/us.

About Richard Franks: After completing his service in the Marine Corps, Richard Franks became a state court judge in Missouri and then sought a congressional seat in 1974, narrowly losing to the incumbent.

After a brief stint practicing law, he became a general counsel for a local construction company in Springfield, MO, eventually working for a variety of national and international concerns as both a project manager and legal counsel on projects across the US, North Africa, and Europe.

He now practices law in Denver and lives on a horse property on the eastern plains outside Denver with his domestic partner, Betsy Hook, and their animals, all of which are adoptions.