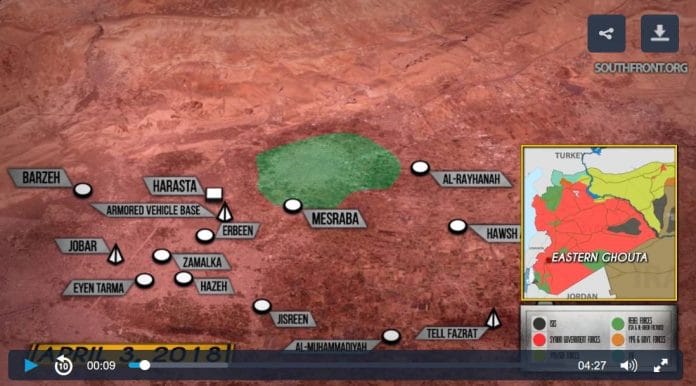 If you’re able, and if you like our content and approach, please support the project. Our work wouldn’t be possible without your help: PayPal: [email protected] or via: http://southfront.org/donate/ or via: https://www.patreon.com/southfront, BTC: 13iYp9CDYZwgSnFXNtpEKgRRqaoxHPr2MH, BCH:1NE49pQW8yCegnFCMvKuhLUnuxvTnxNUhf, ETH: 0x962b312a9d41620f9aa0d286f9d7f8b1769bfae6

On April 3, another convoy of militants and their families departed the district of Douma in Eastern Ghouta under the agreement with the government. According to the Syrian state-run news agency SANA, the convoy consisted of 24 buses, included 1198 militants and their families, and was set to move to the northern part of Aleppo province, which is controlled by Turkish forces. On April 4, another batch of militants reportedly started preparing to leave Douma.

If the situation continues to develop in this direction, the Syrian Army will soon re-establish control of the district without fighting.

On April 3, government forces secured the area of Faydat Aḩmad al-Hayfan in the province of Deir Ezzor. The advance was made in the framework of the ongoing security operation against ISIS cells operating in the Homs desert.

Despite President Donald Trump’s statement last week that the US will withdraw forces from Syria “very soon”, his country is expanding its military presence in the war-torn country. On April 3, the Turkish state-run media reported that the US is setting up two bases in the area of Manbij, which is controlled by the US-backed Syrian Democratic Forces (SDF). The US is reportedly extending an observation post in the village of Dadat and has started construction of another facility south of Dadat.

Earlier, about 300 additional US soldiers accompanied by armoured vehicles and construction equipment were deployed to the Manbij area strengthening the US garrison there.

On April 2, CNN reported citing several US defense and administration officials, that the US military has been working on a plan to deploy dozens of additional troops to northern Syria.

On April 3, Trump softened his position on the troops withdrawal saying that the US still has to contribute some efforts prior to making the decision, which will be taken in coordination with their allies.

On April 2 and April 3, rumors actively circulated online alleging that the US-led coalition has suffered notable casualties in Syria. According to these reports:

Initially these reports appeared in a few Russian Telegram channels referring to some local sources and then were repeated by a number of blogs and media outlets aiming to gain additional views and attention. However, all these reports lacked photo or video evidence to confirm the alleged casualties among the US servicemen.

According to Syrian experts, these rumors are most likely a soft version of the “Russian mercenaries” story when the mainstream media claimed that over 100 “Russian fighters” had been killed in the US-led coalition strikes in the province of Deir Ezzor.

The key difference is that the “Russian fighters” story was a coordinated media campaign while the “US casualties story” looks like an attempt of some media activists and outlets to expand their viewership.